Kevin Metcalfe is one of the cogs that keeps the music business spinning. An audio mastering expert by trade, he is one of an elite few who’s been in the game long enough to remaster his own work (as he’s currently doing with The Cure’s Disintegration album). In a near 40-year career he has worked with everyone from Queen to Wiley via Yello and Underworld; and in the past year he’s been busy mastering for a diverse range of artists such as Mr Scruff, Fink, Judas Priest, Orbital, Lee ‘Scratch’ Perry and Friendly Fires. As you can imagine, he has a story or two to tell. Aaron Coultate paid a visit to his studio in west London to find out more.

When did you start working in this industry?

I started in 1973, when I came down to London from Teeside and tried to get a job at BBC tech. I didn’t get it, but I applied for a job at RCA as a disc cutter, and out of 60 people I was chosen. I stayed there for two years – it was good training, very regimented. Back then disc cutting was only with cassettes and 8-track. After RCA I went to EMI, it was more of a technical role. I had to take the tape, and transfer it to disc. There was not much of a creative element, because you know, tape is tape, disc is disc. But in those days I was mastering classical records as well as pop – it was good fun.

And where did you go next?

Then I got a job at the music centre at Wembley. It was built as a one-stop shop, the idea was you could walk in with your guitar and do everything under the one roof. The main studio held 135 musicians – they scored all the Bond films there. I’d watch and there would be 135 people giving it their all, it would make the hairs on the back of my neck stand on end. I was working in the disc cutting department – I worked on film soundtracks, and there was also a large West Indian community in that part of London. I was working there 1975-79, and in those days there was lots of reggae. You’d get guys coming with tapes straight off the plane from Jamaica. These guys would want to dub it up, you know, but we were doing these cuts live, they didn’t care if you made a mistake, they would say “wicked” and get on with it (laughs).

How did the music scene change in that time, in the early days of electronic music?

Well during that period, the disco 12” came into being, from the US, and that changed everything. It was incredible to compare the 12” to the 7” – it blew our minds – you could cut at a higher frequency and a lot louder. The reggae boys soon got into it, because you could do an extended mix or a vocal and a dub.

So … did you stay there for a long time?

I was there for four and a half years, then it was to Utopia Studios in Primrose Hill, which was run by the drummer from Procol Harum. There was a big fish tank across one wall, they were great studios. I worked with bands like Roxy Music, and at that time, 1979-82, it was all about the New Romantic scene; Duran Duran, Ultravox and Japan. The punk scene started in 1978. I worked with The Clash, Siouxsie and the Banshees, loads more. I was recently working with Siouxsie, remastering my own mastering, how many people do that (laughs).

Tell me a bit about your time at Utopia studios.

That’s where I built my reputation. You cut one record that gets into the top 10, and people come looking for you, even if they are not necessarily the best cuts. I got asked to join Virgin in 1982 and I ended up staying for 15 years. Then CDs came in around 1985. That changed everything. At first, it was just a by-product of vinyl.

“I remember in the early 80s John Paul Jones from Led Zeppelin produced some tapes. We spent ages doing test cuts, and when we finally finished, we left them in reception and went home. Next morning we came in and they were gone. The cleaners had thrown them in the skip, binned the lot”

How did you keep up with changes in technology? Has much has your equipment changed over the years?

When CD’s first came in, we’d cut the whole album in one go. Everyone gets a job, the producer, the engineer and me, it was all done live. Very stressful! But with digital technology, you could compile one track at a time instead of the whole lot. But I’m old school. I’m not into computers, not into software, although I do use them. I’d still say my favourite piece of kit has to be the Neumann compressor – I still use mine now.

You’ve worked with the likes of David Bowie and Queen in the past – is that right?

Yeah I worked with Queen quite closely. Freddy (Mercury) used to sit in the studio and call us. But Roger Taylor and Brian May would come in and argue. Brian wanted the guitars louder and Roger wanted the snare louder. It was a great time, there were great parties afterwards! 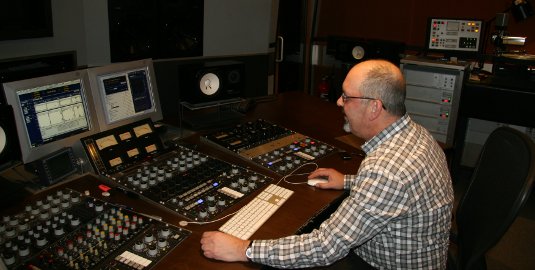 Do you find some bands or producers are more hands on than others?

Some were, some weren’t. As I said, Robert Smith from The Cure wants to oversee everything, and I don’t blame him – they are his records. But with many people, you develop working relationships with them over time and they come to trust you and leave you to your own devices. I do prefer working closely with artists, because I can make a record sound poppy when they may have wanted it to sound dark. I just try to make records sound good to my ears. That’s what I have learned, if you can please yourself you are on the way to pleasing everyone else

Who have been your favourite people to work with?

So many … Prince Fari was great – what a fantastic voice. I remember one album where he just read out all these psalms over a heavy dub. He’d come in and lie on the sofa and smoke a spliff, and have it turned up to the max, he’d be like “yeah, fantastic tune” (laughs).

“The main studio held 135 musicians – they scored all the Bond films there. I’d watch and there would be 135 people giving it their all – it would make the hairs on the back of my neck stand on end“

You must have a few stories to tell…

I remember in the early 80s John Paul Jones from Led Zeppelin produced some tapes. We spent ages doing test cuts, and when we finally finished the 7” and 12”s, we left them in reception and went home. Next morning we came in and they were gone. The cleaners had thrown them in the skip, binned the lot (laughs). A few days later we located some kids trying to flog them off in Ladbroke Grove, so we got them back. That was a close shave. .. I also remember Pete Burns from Dead or Alive – he and the rest of the band were a bunch of scallies basically. I had Nick Heyward from Haircut 100 in one day, and Nick had just reviewed a Dead or Alive single for Melody Maker or NME, and given it a pretty bad rap. Anyway he went to the toilet and disappeared…he came back an hour later as white as a sheet. Didn’t say a word except: “Can I see your studio manager?” I later found out Pete and the boys had followed him into the khazi and let out six fire extinguishers on him!

Some of the albums he’s mastered (in no particular order)

Some of the singles Kevin has mastered:

Ultravox – ‘Vienna’
Yello – ‘The Race’
Duran Duran – ‘Girls On Film’
LFO – ‘LFO’
Japan – ‘Second That Emotion’
Shaggy – ‘Oh Carolina/Boombastic’
U2 – ‘Pride (In The Name Of Love)’
Dead Kennedys – ‘Holiday In Cambodia’
David Bowie – ‘Rebel Rebel’
The Clash – ‘Radio Clash’
The KLF – ‘Justified and Ancient’
Underworld – ‘Born Slippy’
The White Stripes – Blue Orchid/My Doorbell/The Denial Twist
(The Denial Twist made the UK top 10 exclusively on sales of the 7” that Kevin cut!) and Conquest/Icky Thump/You Don’t Know What Love Is
The Raconteurs – Broken Boy Soldiers/Store Bought Bones/Steady As She Goes/Hands
The Prodigy – Hot Ride/Girls/Spitfire
Jack Penate – Have I Been A Fool
Passenger – Walk You Hom