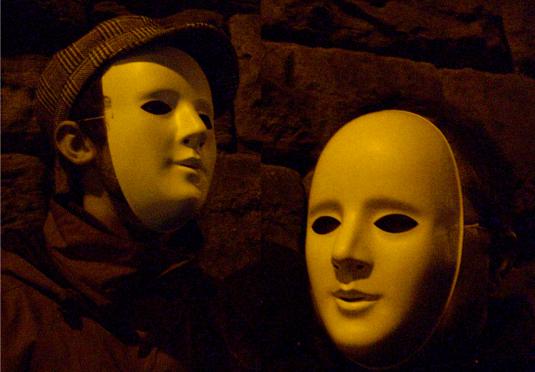 People Get Real is Simon Lister and Peter Wilson, resident DJs at Wax:On (Voted No2 Night in the UK, behind fabric, Mixmag 07) and Reclaim The Dancefloor, the summer success story which rocked Eden Ibiza to the rafters during its first season this year. Juno Plus caught up with them on the week they launched their new track, “Robin Hood” on MagicBag to ask them a few questions regarding DJing, production and life in general…

Hi guys, first things first. Until now you’ve been primarily known as DJs, when did you first get into playing other peoples records?

Just after we left school, around 1997, we got jobs/student loans and could finally afford the kit to get mixing in our bedrooms. We’d always been into electronic music, buying compilations plus the odd record here and there, but it took off in a different way once we could afford it! This all coincided with us starting to go clubbing properly and getting out to Shindig in Newcastle, Back to Basics in Leeds and various other places around the country.

And… was that how you met?

We met at school. We were 11 and in the same class. We’ve been mates ever since then, frequently getting each other into trouble.

Why the move into production?

It’s not really been a sudden thing. It’s something we’ve been concentrating on for a couple of years now, but it’s taken this long for us to start to produce works we’d be happy to release or send to record labels. We wanted to spend the time getting to know the studio and exploring sounds and methods of production. We didn’t just want to release music for the sake of it. Like anything we do, we wanted to start by releasing work that we we’re proud of and had spent time working on.

Would you say that you’ve gone for any particular sound with the music you’re producing?

We see the music we produce as an extension of how we DJ. If we wouldn’t play it wouldn’t get made. So we make anything from disco-ey chuggers, house tracks, as well as the style of stuff we play at Wax:On.

And who would you say your influences have been?

(Interrupts) OK, OK, we get it, there are a few influences in there. Changing tact then…Is there any software that you favour in your production?

We generally work up our ideas in Ableton as it’s quick to get things down and bounce around between the two of us then we often move tracks into Cubase to finish the production.

“When Luciano missed his flight that was pretty special, we got to play the whole night to a packed club with people chanting our name at the end”

Jamie Jones and Matt Tolfrey are arguably currently very “hot” in the UK house and techno scene. They’ve both contributed remixes for your recent tracks “Robin Hood” and “Wider Pro”. How did you go about securing such a high profile contributions?

Well being fortunate enough to play and party alongside both has helped us hugely.  Matt has all guns blazing at the moment thanks to a string of really strong 12’s and also being a great DJ. The same can be said for Jamie, who has great musical tastes and has created a strong dance floor influenced album, which is pretty hard to do.

You’ve also just been involved with the release of Wax:On’s first commercial mix CD alongside Fake Blood. How does your contribution differ from his?

Ours differed in a couple of ways. We put together a kind of retrospective, tracks that we’d played over the last five years at the club. Ones we’ve used to warm the night up and get things going. It purposely isn’t a bunch of “big tunes” because we liked to leave that to the guests. We preferred easing the crowd in and getting them going with tricks they might not have heard or necessarily associated with Wax:On.

It must have been difficult choosing which songs to include on something that covers so much musical ground, are there any other tracks which you would have liked to include but couldn’t fit in your mix?

It was really difficult – we’re not going to tell you how many tracks we initially sent through to try and get licensed!  The two main tracks we’d have liked to include but couldn’t (for various reasons) were Le Dust Sucker “Love Me”, and Supermayer “The Two of Us”.

You’ve obviously played alongside a lot of big name headliners at Wax:On over the years, have you ever felt yourself being star struck or even intimidated?

Richie Hawtin was a huge one for us, but once we’d said hello, you end up remembering that he’s essentially like everyone else, pretty normal. Thankfully we’ve only come across one or two divas over the years.

Over your years as Wax:On residents, are there any gigs that stand out as being particularly memorable for one reason or another?

When Luciano missed his flight that was pretty special, we got to play the whole night to a packed club with people chanting our name at the end. The NYE parties are always insane. Reclaim the Dancefloor in Ibiza and the Evolution Festival were both excellent over the summer. Back in the early days of Wax:On we played in the second room with Justin Robertson and the sweat was literally dripping off the ceiling.

And are there any other residencies or performance projects in the pipeline?

We’ve been involved with a great little party in Liverpool called Coco de Mer where we’ve played alongside Sascha Dive and Jimpster. We’ve also just got involved with a new night in Newcastle called Dada where the promoters are trying to build the night around the residents as much as they are their bookings, which is flattering considering their bookings include artists like Ewan Pearson, Stimming and Magda.

Before we finish, can you give a brief outline of PGRs vision of the future?

Hopefully get some more music out there and continue to play at cool places with good crowds… we’re easily pleased!

Wax:On Volume 1 and Robin Hood are available now on Juno Download, with new single Revolver out later this month.