We select our 10 favourite hardware effect units, including filters, delays and more from brands including Vermona, Roland and Erica Synths.

As much as we love the raw, unadulterated sound of synths, drum machines and samplers, effects act like the musical herbs and spices that add flavour to your tracks. Whether it’s a simple filter or a semi-modular unit hooked up to a Eurorack setup, effects add colour and character to music. Even in an age of plugins and software effects, hardware still does things that just can’t be achieved any other way.

Join us as we run through our favourite effects units, from simple analogue filters to spring reverbs, digital delay units and more from brands including Vermona, Roland and Korg. 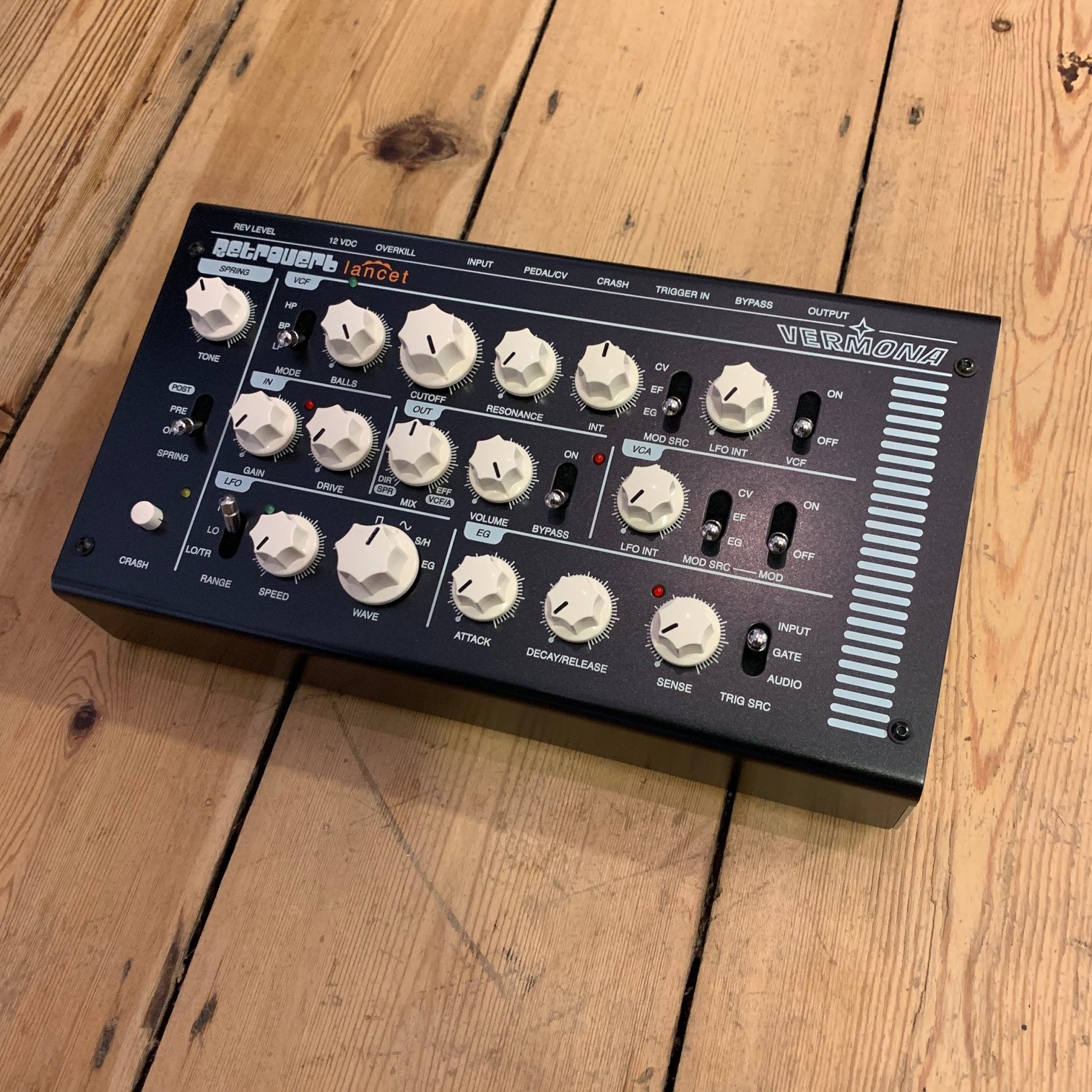 To say that Vermona specialises in high-quality analogue gear is something of an understatement. The German brand’s synths and drum machines are some of the best on the market, but where they really excel is in the world of effects, an area where they seem to focus more attention than just about anyone else.

Picking from the range is hard, but the Retroverb Lancet stands out for its versatile combination of spring reverb, overdrive, filtering and the kind of envelope and LFO features you’d normally associate with synths rather than effects. The Retroverb is way more than just a reverb unit, but the spring is the star of the show here, offering a delightfully retro edge to the sound. It’s really a multi-effects unit in a uniquely analogue sense. A superb accompaniment to analogue synths and drum machines in particular, but versatile enough to work on anything. 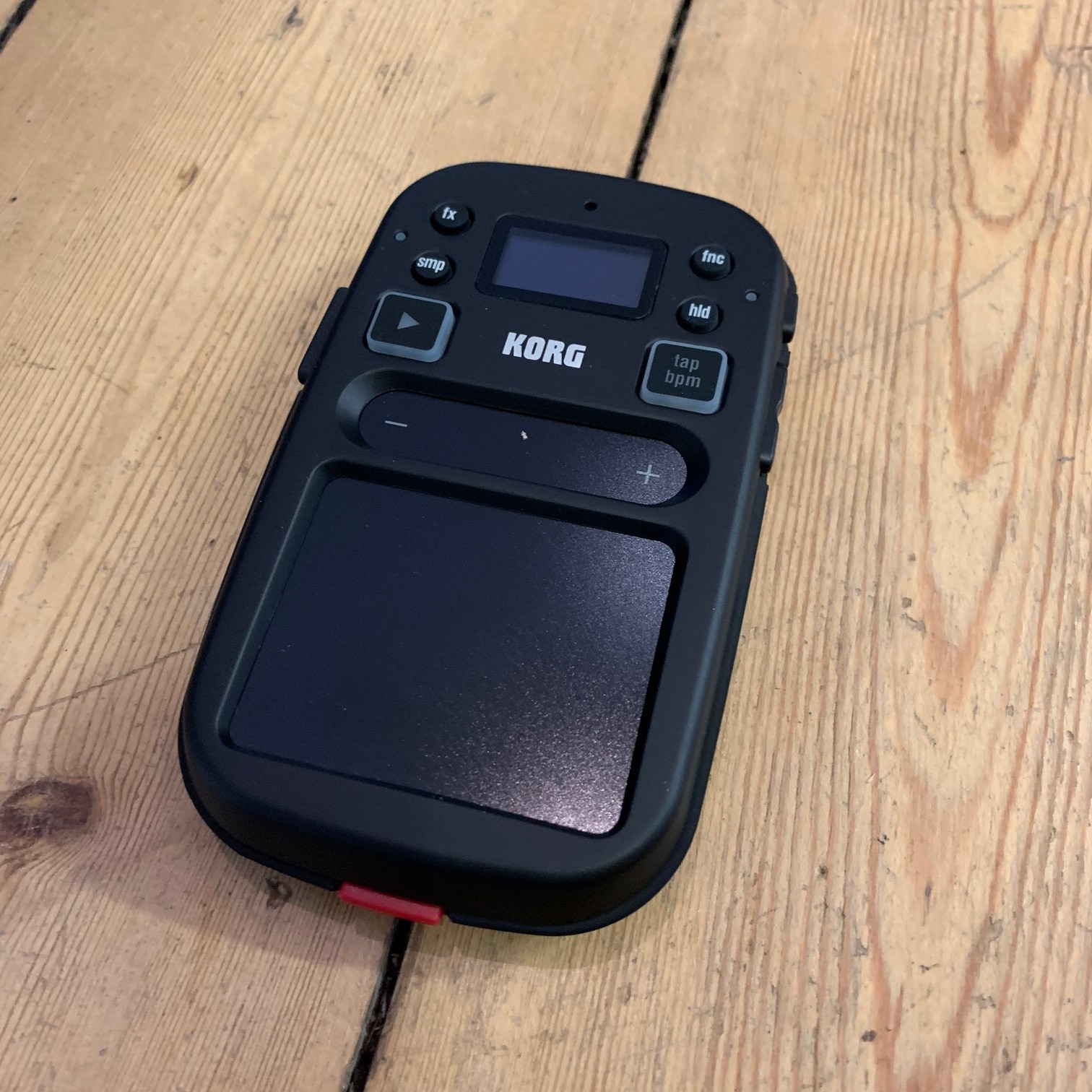 A tiny powerhouse. Korg’s Kaoss Pads redefined performance effects when they were first introduced in 1999, packing various digital algorithms into a compact format. The unique selling point was the touchpad interface, allowing musicians to get hands-on and manipulate the sound in real time. Although the single-touch pad might seem basic by modern standards, this was long before the widespread arrival of phones and tablets with touchscreens, making the Kaoss Pad stand out from the crowd.

The original was probably best known as the glitchy, chaotic sound of Radiohead’s ‘Everything In Its Right Place’, but various models in the expanded Kaoss range over the last couple of decades have expanded the sonic potential and versatility even further. The smaller Mini Kaoss Pads prove to offer much of the appeal of the full-sized models, especially with the addition of sampling features found in the S version. It’s a creative way to loop, delay, glitch and mangle sound at a very reasonable price. 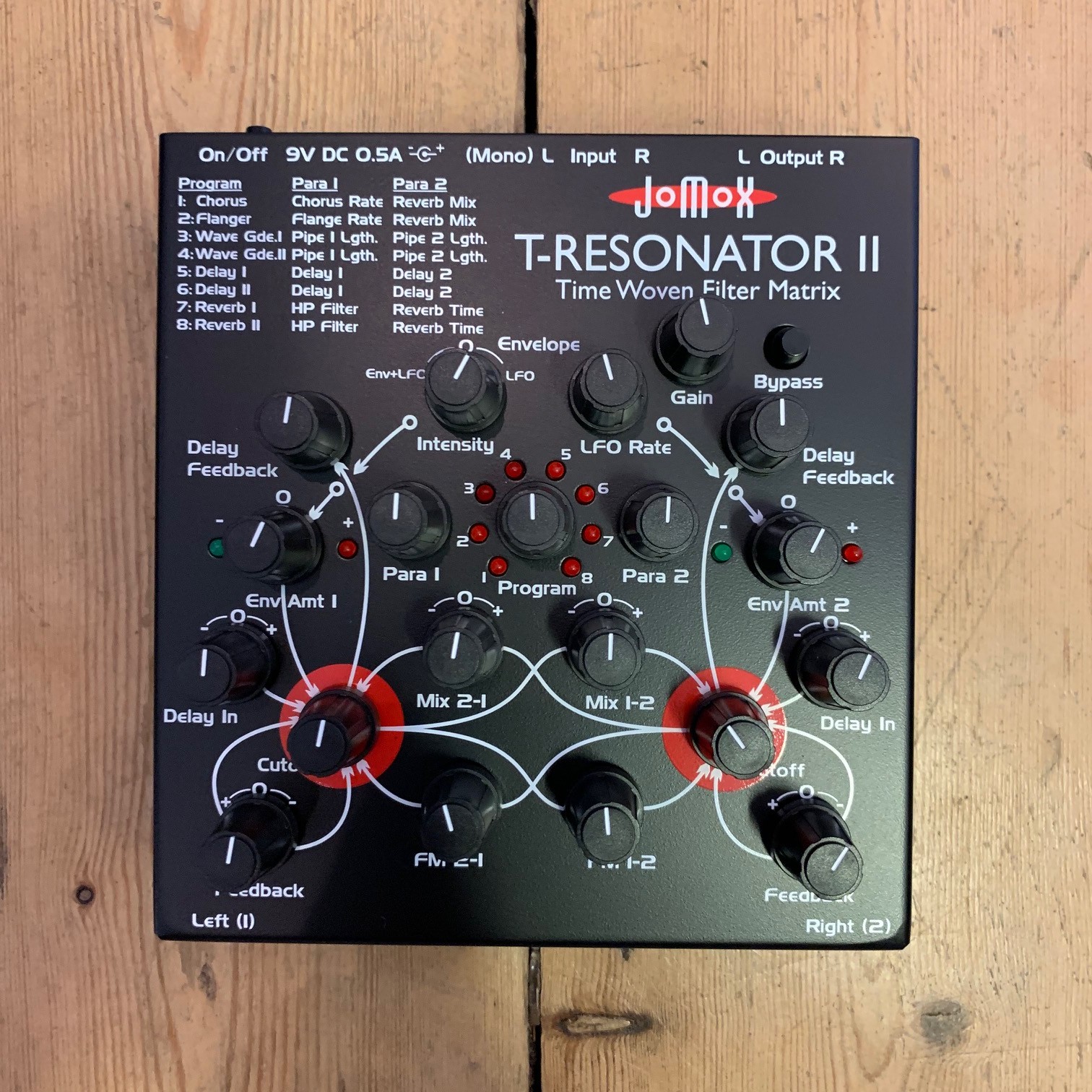 Jomox are best known for drum machines, but alongside mighty analogue monsters like the Alpha Base (featured in our 10 Best drum machines list), the German brand has always shown a parallel interest in creative effects. The T-Resonator is a filter box on steroids, described by the brand as a “time-woven filter matrix”. The T in the name stands for time, referring to the way the unit builds on stereo filters with digital delay lines and an LFO. The results are everything from fairly simple filtered delays through to long, modulating reverb-style effects and washing ambiences.

The complexity of the T-Resonator takes time to get to grips with, but it’s well worth putting in a bit of effort for the creative results you can draw out of this fascinating and unusual little box. 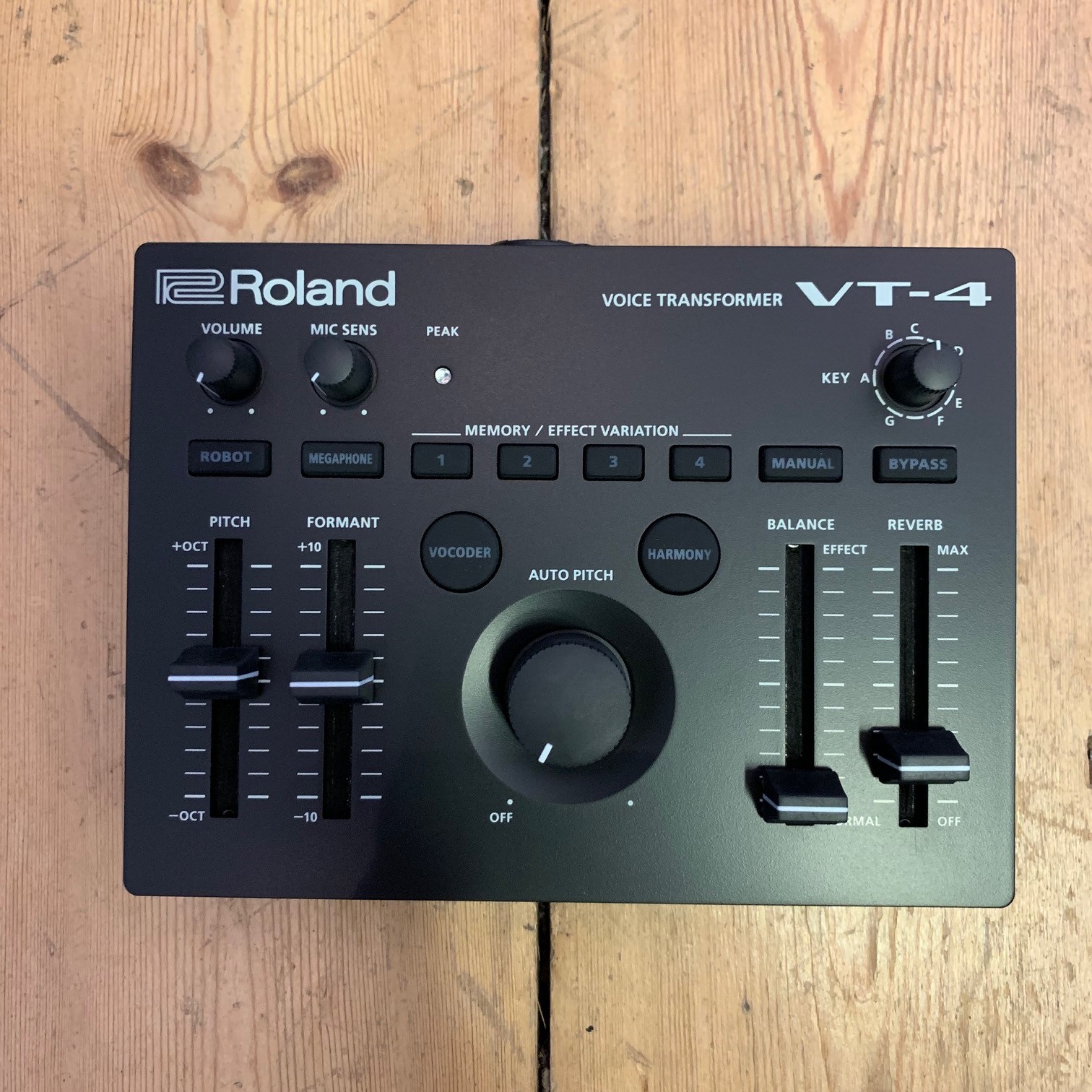 The original Voice Transformer was the Boss VT-1, a mid-90s digital effect designed as a simple way to mimic the sound of classic vocoder and harmoniser effects. One of the few vocal-specific effects on the market, it became a bit of a cult classic, heard on Apollo 440’s late-90s big beat classic ‘Stop The Rock’.

Roland resurrected the Voice Transformer name in 2014 as part of the Aira range, which has subsequently been updated to the VT-4. The concept with the latest model is broadly similar to the 90s original: it’s all about quick, easy vocal effects without the need to mess with banks of parameters. The key controls here are the pitch and formant sliders on the left-hand side of the unit, which allow you to shape and morph the sound of your vocals in real time. The VT-4 can do anything from subtle twisting and shaping through to extreme vocoding and robot effects. It can be gimmicky if you push it too far, but exercise a little restraint and it’s hugely effective. It’s worth trying on drums and synths too, offering some weird and wonderful effects when pushed into experimental territory. 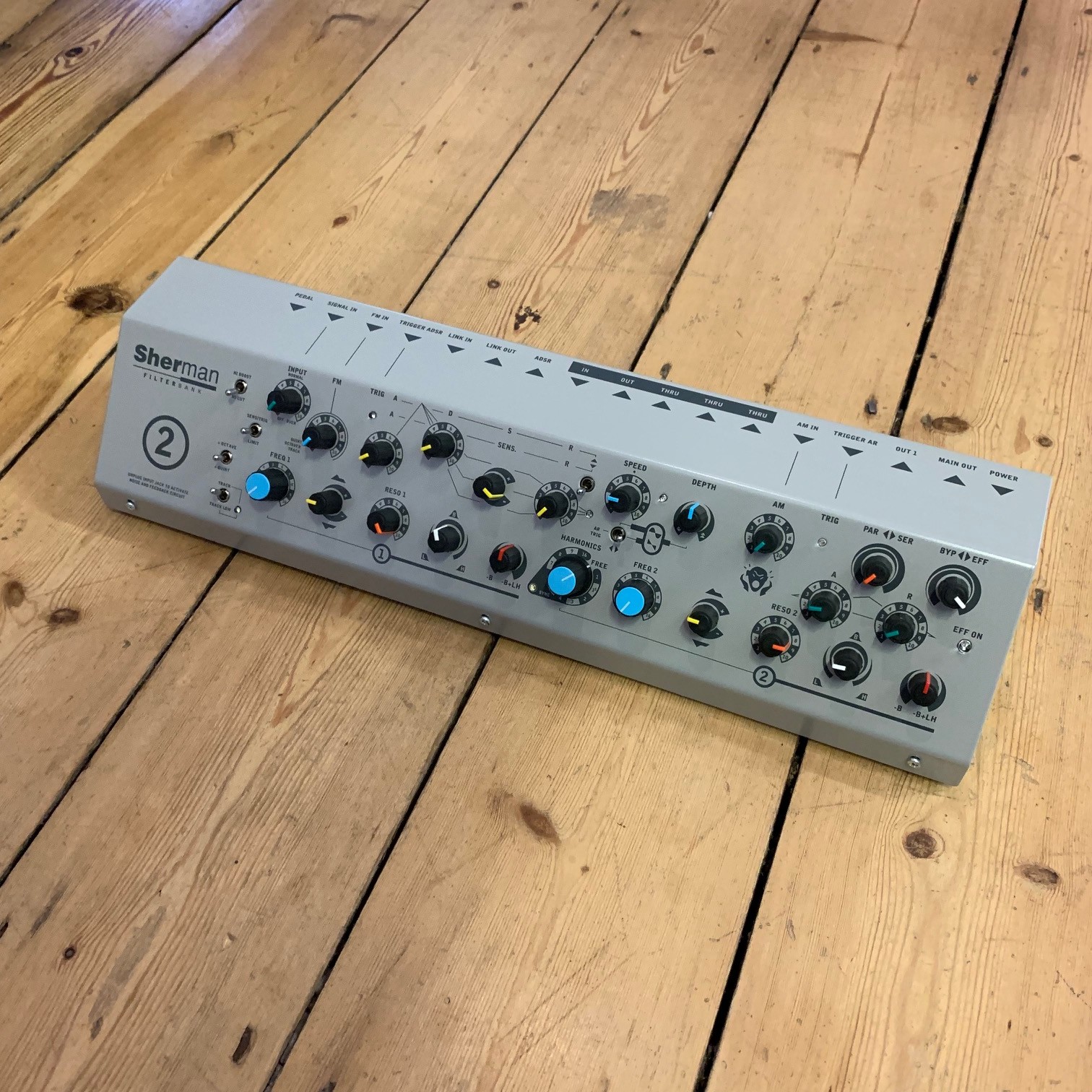 While filters might seem like quite simple tools, they can be hugely distinctive and effective when done well. Just think of synths like the Minimoog or Roland TB-303, which are defined by the character of their low-pass filters. Even in the DJ world, Urei isolators and Allen & Heath filters have become part of the fabric of electronic music. The Sherman Filterbank can stake a strong claim to be considered on the same level, originally launched in 1996 and given a modest update in 2001.

At heart it’s a bank of three analogue filters (low-pass, band-pass and high-pass), switchable between parallel and series configuration. Although getting hands-on with the cutoff and resonance knobs is the real key to creating movement and getting the most out of the filters, the LFO, envelope generator and array of MIDI and CV inputs provide huge potential for automation, modulation and creative synthesis. Used by everyone from Aphex Twin to Trent Reznor, the Filterbank is still produced in Belgium by its original designer, Herman Gillis. A modern classic. 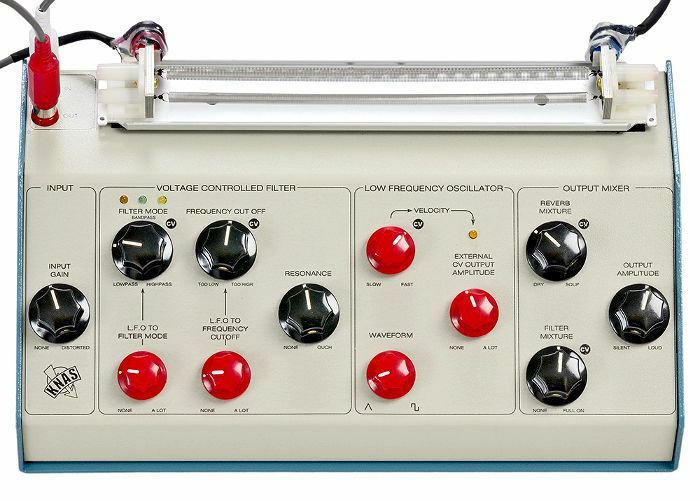 Spring reverb is one of the oldest audio effects in existence, dating back to the 1930s when it was included in Hammond organs as a way of providing a sense of ambience and space, with metal springs used to add echo to the sound of the instrument. Nowadays the effect is most commonly found in guitar amps, but it also crops up occasionally as an effect in its own right, often associated with modular synths.

Knas’s Ekdahl Moisturizer packages the concept into a dedicated effect, with the springs proudly displayed to prove the point. Run signals through it without touching it if you like – and the result is a classic spring sound – but the real point here is to ‘play’ the spring itself. Manipulate the visible springs by hand while a sound’s playing and you can physically alter the signal, adding fantastic weirdness. It sounds great, but it also adds an interesting visual element for live performance. There’s no doubt that the Moisturizer is the most visually striking effect on our list, part way between retro dub studio and a mad scientist’s laboratory. 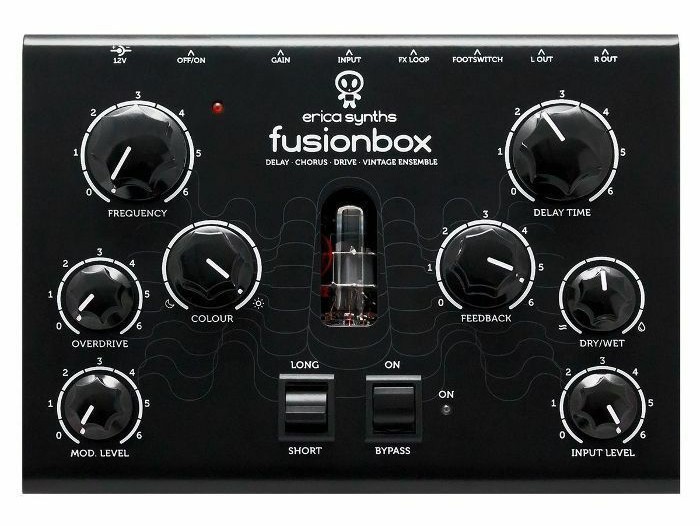 The growth of the modular scene over the last decade has seen the emergence of countless interesting effects, but most are confined to the Eurorack format. For those who don’t want to take the plunge on a full modular setup, however, some of that innovation has spilled over into other formats.

Erica Synths mainly specialise in Eurorack modules, but also occasionally repackage some of their technology as standalone devices. The Fusionbox is like a greatest hits of the Latvian brand’s analogue modulation effects, with the key element being the inclusion of a pair of bucket brigade chips (basic analogue delay circuits with a uniquely charming lo-fi sound). There’s also a valve circuit thrown in for good measure, allowing you to push the level and overdrive the signal, adding beautiful creamy distortion. It’s a superb combination for warm, gritty delay effects, chorus and great filtering via the Colour control. 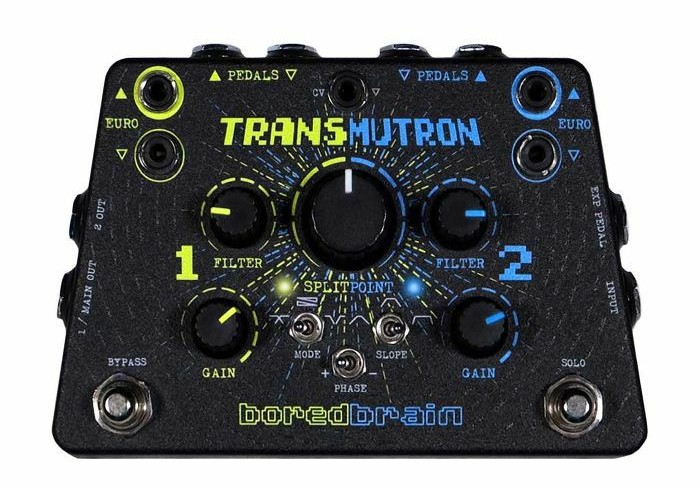 The Transmutron is one of the more unusual selections on our list. Is it technically an effect? We’re not quite sure, but it certainly falls into the broader category. Essentially a kind of dual effects loop, the unit splits your signal in two and sends each version out to effects before recombining the effected signals with filters and crossfading. At the most basic level, you could hook up one effect on channel 1 and a second on channel 2 then blend the two, but it gets really interesting when you send different frequencies to different effects, chaining up effects to create mad combinations – synth or guitar effects, stompboxes and Eurorack modules are all compatible.

There’s very little else like it on the market, but it opens up new creative possibilities that would be hard to achieve any other way.

The rise of software plugins put a serious dent in the popularity of digital multi-effects but there’s still a lot to be said for a dedicated hardware box that runs entirely independently of a computer. Back in the day, multi-effects were the obvious choice for studio and live use, often used for reverb.

Danish brand TC Electronic, now part of the same Music Tribe group that includes Behringer and Midas, know a thing or two about digital effects, having been founded in the 70s and ridden the wave of DSP technology that emerged in the ensuing decades. The M100 represents a distillation of the company’s technology into a small, affordable format: a stereo unit based around 16 preset effects with limited adjustability via a parameter knob on the front panel. The benefits of such a simple approach make sense as soon as you begin to use the M100: want a plate reverb, for example, or a chorus or a phaser? Select the relevant algorithm, tweak the parameter knob to fine-tune the sound and away you go. It’s a really quick way to get high quality sounds and avoids the endless tweaking that can sometimes arise in plugins from too much choice.

Vermona earn a second place on our list with one of their many filters. We could have chosen other Vermona effects here – the beautifully retro VSR3.2 spring reverb, perhaps, or the versatile Filter Lancet – but the Action Filter has proved enduringly popular since its introduction back in 2002 as the DAF-1 Dual Analog Filter. Straddling the line between studio tool, live performance device and even DJ tool, the Action Filter is a long-standing favourite of many producers.

Unashamedly simple, the Action Filter offers nothing more complex than pairs of inputs and outputs, plus an array of knobs and switches to control the dual resonant filters. There’s no MIDI or CV control, just a purely manual approach with the emphasis on the pair of large cutoff frequency knobs either side of the rack unit. When combined, the two filters operate as either a bandpass or a notch filter, selected via a toggle switch. There’s also the option to choose between a softer ‘smooth’ mode and the more raw ‘rough’ mode based on the first-generation unit.