Add to Wishlist
Out of stock $12.22
Email me if this price drops

The Collectors Series is a new mix CD compilation series by A&R Stefan Struever, the mastermind behind the seminal "DJ Kicks" compilations. The series is aiming to showcase the multiple faces and histories of dance music. The second volume of the "Collectors Series" comes from Berlin DJ and producer Kaos, in cooperation with singer and percussionist Salvatore Principato of seminal 80s NY band Liquid Liquid. The band is today namechecked by many not only because of the track "Cavern" which was sampled by Grandmaster Flash and the Furious Five for their hit single "White Lines", but also because Liquid Liquid's mix of percussive, minimal post punk funk laid the blueprint for many of today's "disco punk" bands like Radio 4 or The Rapture. In 1997, Mo' Wax released a "Best Of" and soon DFA will release a DVD with rare video footage, including a Liquid Liquid concert at the Paradise Garage. So it's an illustrious team which has dedicated it's mix to the great legacy of Cosmic Disco. Today, the sound of Cosmic Disco is considered a major inspiration for producers and DJs like Metro Area, Danny Wang, Lindstrom, Munk or Joakim. DJ and producer Kaos was also highly inspired by the spaced-out Northern Italian dancefloor sound for his acclaimed "Hello Stranger" album. In Munich he hosts the "Bingo" club night at an original 70s discotheque, which recently has become the main spot for the renaissance of Cosmic Disco in Munich - a city, where the Cosmic sound was big in the late 70s till early 80s. Besides DJing, Kaos recently produced remixes for Tom Vek, Roxy Music, Klein & MBO amongst others and has released on numerous labels, most notably Rong Music and the Kitsuné label. After a joint musical cooperation for the French label, Kaos & Salvatore Principato digged deep in their crates, and sat down to create a phenomenal mix which puts the sound of Cosmic Disco as a fundament for excursions to its various spin offs in the past, present and future. The mix kicks off with the sound of a thunder storm, which introduces Sylvester's classic "I need Somebody To Love Tonight" (written by Patrick Cowley.) What better atmosphere and question could open a mix that reflects the highs and lows, passions and desperations a night on the dancefloor can bring? The answer might follow later, in the meantime, Logic System's "Unit", a rare Japanese-French pop tune from 1981 is mixed into the Sylvester song and kicks off the mid tempo groove, which shapes large parts of this mix CD. During a percussive break from Ola Jagun, Sal P introduces himself and Kaos. Shortly after, the mix blends into the rockish "Don't Stop The Music" from The Bombers, a classic 70s disco track, produced by Kurt Hauenstein of Supermax fame. It is followed by the album version of Yello's anthemic "Lost Again"- one of the big classics at Cosmic Disco on the Lago Di Garda in Italy back in the day. Moments later, the beats of the legendary Swiss duo flow into Billy Thorpe's "Stimulation", a straight but funky as hell no wave tune from Australia. Next up is the equally funky, super rare "Capataz" by Velodrome, a much sought after proto electro tune. Elegantly, KIM's "Kim Kong" proceeds with a slick cut produced by the Paris based Tigersushi crew, with which Sal P. and Kaos return to the present. Logic System come back with "Clash", another super cut of this French-Japanese joint venture. With Zazu's "Captain Starlight", the mix reaches its first peak - this wild tune, written by Berlin singer Frank Zander, is a hard to find song, that'll give every macho man goose pimples. With Map Of Africa, the mix then opens a new chapter: The new school of New York disco. First up is Map Of Africa, the legendary project by DJ Harvey and Rub n' Tug’s Thomas Bullock, with a rocking and rolling cover version of Eddy Grant's "Black Skinned Blue Eyed Boys". DFA's The Juan Mclean continue straight on with an edit of "Give Me Every Little Thing", which is mixed into Danny Wang's fantastic "Like Some Dream (I Can't Stop Dreaming.)" The pace slows down, and it goes back to a dreamy atmosphere, into the early 80s again with ESP's "It's You", and "Fist Of Facts", another ultra rare funk tune from the plastic decade. After tracks by Engine, Throbbing Gristle, Tones On Tail and the recently rediscovered and much celebrated Tantra, the mix CD rounds up with classic cuts by The Residents ("Diskomo"), UI, and Augustus Pablo's great dub tune "AP Special". The final chapter belongs to a track by Sal P's former band Liquid Liquid with their iconic track "Lock Groove". The very end is by downtown New York legend Arthur Russell, the man behind The Loose Joints, and various classic albums, from which "The Platform On The Ocean" was taken. 73 Minutes of beautifully selected music ends with another thunder storm which leaves us behind, dreaming. 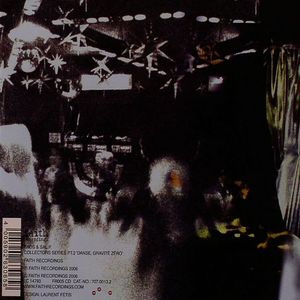 Copy and paste the HTML below to your website/blog:

Copy link
copied
Use this link on Bandcamp, Twitter, Mixcloud and your own blog/web site. For YouTube and Soundcloud, see below.
Embed/share player
copied
Share the player for this release by copying the HTML below to your website or blog.

Add a buy button to your tracks and playlists by clicking the pencil icon below the waveform. In the edit page, go to the 'Metadata' tab and add your Juno artist, label or release page for listeners to purchase your release / releases.

If you are a Pro user, you can also customise the text used for the 'Buy button' on the edit page in the 'Buy link title' section, to read 'Buy at Juno'.

Add a link to your release at the top of the description section to maximise visibility and sales.

Create a chart to increase sales of your releases and to boost your profile.

Create chart
Embed/share image
copied
Share the image of this release by copying the HTML below to your website or blog.

Create a banner for this release

We'd like to know what you think of Juno's website. Please send us your comments and suggestions via our feedback page.