Extensions Out Plus: Four Poetry Books 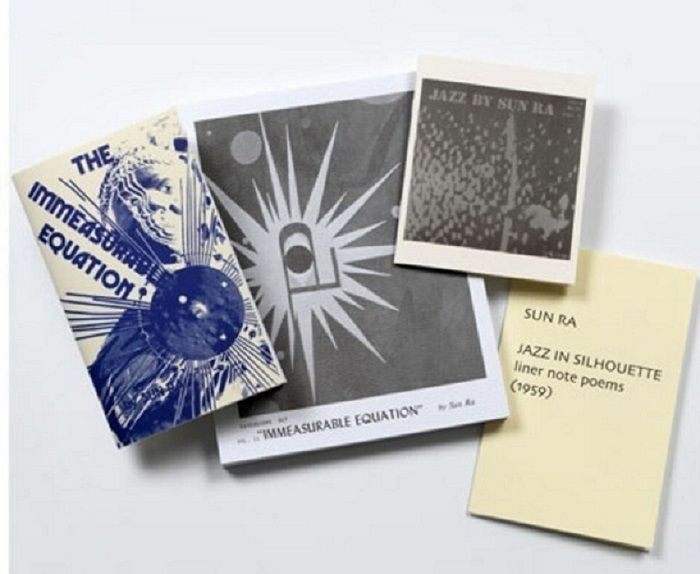 Corbett vs. Dempsey announce the release of four books of poetry by Sun Ra. Two of these were pamphlets that accompanied early Sun Ra albums issued in the late 1950s; the other two were published more than a decade later by Infinity Inc. / Saturn Research. CvsD's reprints are fastidiously designed facsimiles of the original publications, marking the first time they have been available in their Ra-ordained form since they were published. An architect of Afrofuturism and one of the great musical thinkers of the 20th century, Ra's work extended far beyond jazz and even music to the realms of pageantry, performance, theater, philosophy, visual art, and literature. In the mid-1950s, he handed out leaflets and gave street corner lectures -- revisionist interpretations of the Bible and bold meditations on the status of African Americans in American society. A few years later, Ra began disseminating his poems in -- and sometimes on -- his albums. His debut, Jazz By Sun Ra, was issued in 1957 by the Boston-based Transition label, a short-lived company that sold records by subscription; this record contained a beautiful booklet, now as prized as the LP itself, with rare photographs and a selection of poems and proclamations, as well as the personnel and recording credits. Ra's Jazz In Silhouette was released two years hence on Saturn Records, the label he started with Alton Abraham, and it came with a mimeographed liner booklet -- now exceedingly rare -- that was folded, unstapled, as an ultra-economical accompaniment to the vinyl. The CvsD version folds this slim pamphlet of poetry into a slipcover with a classic photo portrait of Ra by Thomas "Bugs" Hunter on the back. Perhaps Ra's best-known book of poetry, reprinted in many alternative versions with different contents over the years, is The Immeasurable Equation; this incarnation restores the original Infinity Inc. / Saturn Research version, published in Chicago in 1972 and distributed widely by the Arkestra, often from the bandstand. It features more than 60 of Ra's poems. Finally, perhaps the rarest of Ra's poetry books is Extensions Out: Immeasurable Equation Vol. II, which was also published by Infinity Inc. / Saturn Research. This 8 1 / 2 x 11 inch book is a massive compendium of more than 130 poems, very much in step with the mimeo poetry publications of its era -- simple staple binding, one-sided pages -- featuring three photographs of artwork by Ayé Aton, a close ally of Ra's in this, the period of the Arkestra classic Space Is The Place, on which Aton plays percussion. Great care was taken to reproduce the special textured cover of this highly sought-after book. These four books are exclusively sold as a set. The first edition is limited to 1000 copies. Corbett vs. Dempsey is proud to represent the non-musical side of the Sun Ra Estate. The label gratefully acknowledges Irwin Chusid and Sun Ra LLC for the permission to release this historically rich chronicle of Ra's poetry, presented as he originally conceived it.