Canadian producer’s debut LP for Brainfeeder due in May 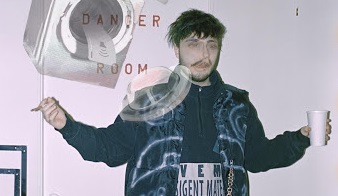 The album is a strong example of electronic music in the new deconstructed club style, showing off the Canadian producer’s unmatched conceptual imaginings and production chops, which he has honed since 2017.

The next step in Serpentini’s lifelong quest to “find the fourth wall and break it”, it is scheduled for May 7, and will see a digital release alongside a strictly limited edition pill-shaped USB stick in holographic packaging.

The album not only features Little Snake’s fellow contemporaries SABROI, Tutara Peak and Shrimpnose, but also has cameo production appearances by electronic titans Amon Tobin and Flying Lotus. The lead single and FlyLo collab, ‘Fallen Angels’, is accompanied by visuals created by Serpentini under the tutelage of concert visual artist David Wexler, aka. Strangeloop.

According to Little Snake: “A Fragmented Love Story, Written By The Infinite Helix Architect is intended to be a signal to those who have experienced the consciousness of a dualistic pattern they may find themselves in. It is intended to be the most generalized amalgamation of the furthest corners of all tangible emotional complexes and perceivable spectrums known to humankind and beyond. It is a take on the consciousness of the severe echo chamber of inexplicable trauma and fulfillment around it throughout my own personal experience while trying to fully step outside of my perception of reality and notice the patterns we all face.

To those of you who resonate with this, this is about safely finding a way out for those who are finally ready to step outside the dualistic frequency of love and fear. This is about creating conversation for those who suffer trauma beyond comprehension and cannot talk about it, and connecting on a level where we can bring the next conscious step in the evolution of humankind. It is about working together as humans and together as galactic beings. If you are reading this you are not alone. We are not alone. We may move forward now to the new reality if you are ready.”

Little Snake signed to Brainfeeder in 2018 after his tracks became a staple in Flying Lotus’s DJ sets, with the Brainfeeder label head describing his productions as “fkn insane”. He has released three EPs on the label: “YATDC” (2020), “LOST IN SPIRALS” (2019) that was informed by math rock, textural noise, acid techno and jungle; and “ENTER” (2018) which was inspired by the Gaspar Noé film Enter The Void.

Of the new producer, Amon Tobin said: “Little Snake approaches music with a reckless abandon that gives me hope for a new generation of producers.”