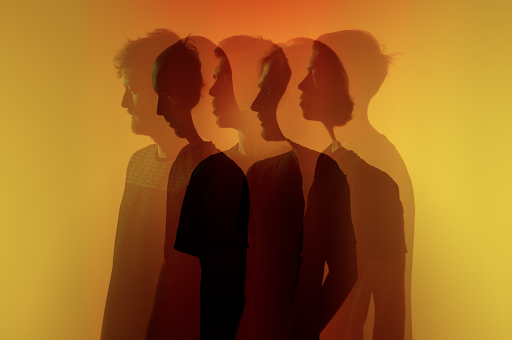 STUFF., self styled electro-weirdos, have announced their third album T(h)reats, out on May 7 on Sdban Ultra.

Kicking off the announcement is the reveal of a music video for lead track ‘Honu’, directed by Belgian visual artists volk.be.

‘T(h)reats’ being the band’s third studio album, it takes inspiration from a series of live shows in 2019, and is a reaction to the uncertainty of the COVID-19 pandemic. Speaking on the project, the band said: “After hours of talking, philosophizing and fantasizing about what the new approach of the record could be, nothing concrete came up. Then we just started making music to see where we’d end up like we’ve always done. As a result, in this day and age, with this group of people … this is what happened.”

STUFF. released their debut EP in 2012 and in 2014 were invited to perform a Boiler Room session, making them the first European live band to feature on the streaming platform. They released their self-titled debut album in 2015 to critical acclaim, and the follow-up album ‘old dreams new planets’, released in 2017, topped the charts in Belgium.

The band have gained a growing reputation for their eclectic live sets, playing over 150 shows on stages as diverse as the North Sea Jazz Festiva, Pukkelpop, Secret Garden Party, Shambala festival, Dimensions, and Fusion.