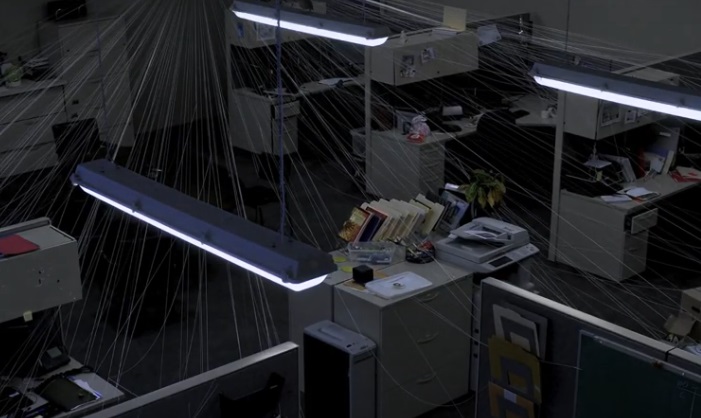 Visionist has announced details of his forthcoming third album, which will include collaborations with Black Midi drummer Morgan Simpson and pianist Matthew Bourne.

The video was created using footage filmed of Jonathan Schipper’s 2016 installation, Cubicle, from the Rice Gallery in Houston, Texas. Its footage of abandoned offices entangled in spider webs certainly takes on a new perspective in this work-from-home age of the pandemic though.

Visionist explains: “The song is about protection, usually a positive action – but not always. I see the action of folding as a form of safe-keeping or the first step to ruin. A fold can also be a protection in numbers or what could be considered a lack of individuality.” He continues, “Every Birdcage should have a door that is controlled inside and out, it is not enough to be admired if you cannot admire yourself.”

Talking about the video, he adds, “I’ve been thinking a lot about, and acting on the notions of repetition, routine, control. I came across Schipper’s Cubicle exhibition a few years ago, so when we first went into lockdown, it came to mind. The Cubicle demands patience and seeks evolution. At the beginning of lockdown there was a lot of Hope for new thought, but it was the creatives call for destruction under the old rule.”

* ‘Call To Arms’ is scheduled for release on March 5