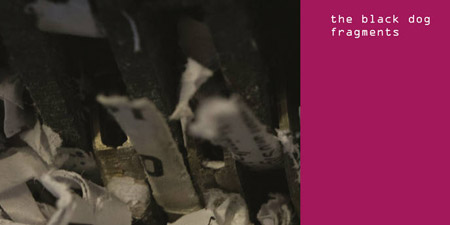 The Black Dog have been discussing details of their new album Fragments, which has been set for release on November 6 on Dust Science Recordings

The project grew up out of a commitment the legendary electronica artists made to furnish fans who subscribed to the artist crowdfunding service Patreon to deliver at least one new track a month.

“Fragments was a completely new way of working for us,” says a statement from The Black Dog which accompanies promos of the LP. “We’ve always worked with an internal brief, creating documents, pictures and videos, simply because keeping an idea on track with three individuals can be difficult. It’s easy for someone to be edged out of the creative process when the focus is not clearly defined.

“It’s a formula we’ve used since the early 2000s, but things have changed a lot since then, particularly when we decided to dip our collective toes into supporter memberships with Patreon. It made us think about what we could do directly for our supporters rather than just the next album or project. At first, the whole thing felt odd and uncomfortable, but we decided that we’d try a few things and ask for feedback.

“Fragments was initially a way for us to see how we could include others in an ongoing creative process. There was no over-arching concept, no defined characteristics or purpose, just the promise that there would be at least one new track for members to download every month. Consequently, we never knew what was coming next, so the old, very focused working method was irrelevant. It was difficult for us to let individual tracks go without knowing what was coming next, but this also made the project more interesting.”
When the Covid crisis hit in Spring 2020 , the trio was forced to continue the project remotely from their respective home studios, which is when they realised they could re-organise and remaster the individual tracks into a coherent album, capturing a specific moment in time and “drawing a line under the first phase of the project.”

Like the band’s recent Allegory EPs, the productions are stripped back and relatively simple. “We used to hide many subtle elements within the layers, but not so much this time. Fragments is our journey through many changes, both self-imposed and those imposed upon us, and it ultimately led us to create things differently. We hope you like it..”

The album will be the 15th from the Black Dog camp, which has evolved through various line-up changes – the most significant being in 1995 when Ed Handley and Andy Turner split with Ken Downie and re-grouped under their former name Plaid – to the current line up of Downie, Martin Dust and Richard Dust.