Behringer have cloned the Curtis CEM3396 ‘synth on a chip’ 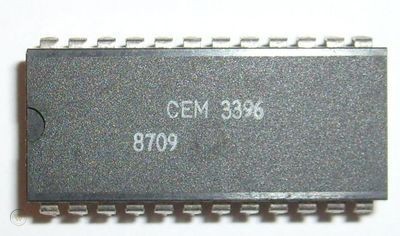 Behringer have announced that their sister company, Coolaudio, has developed a clone of the 1980s Curtis CEM3396 integrated circuit, best described as an analogue synth on a compact 32-pin chip, containing two oscillators, a filter and, in Coolaudio’s version, four VCAs.

The brand’s statement reads: “Our sister company Coolaudio, who designs highly sophisticated semiconductors, has just released a complete voice (2 multi-waveform Oscillators, a VCF plus 4 VCAs) on a single chip. The chip is an improved version of the Curtis CM3396 and will allow us to create high-performance analog poly synths in a very compact manner.”

The Coolaudio V3396 will be sold to the public as well as being available to Behringer for use in their own products. The chip was used in vintage synths including the Oberheim Matrix 6, Elka EK-22 and the Cheetah MS6.

Behringer haven’t hinted at any specific applications for the chip, but analogue polysynths seem like the safest bet. We could well see a clone of one of the aforementioned models, or maybe even an entirely new design. The low-cost chips might even mean that Behringer could produce analogue polysynths at lower price points than the Deepmind.

Scroll down to hear the CEM3396 in action or read our review of the new Behringer Cat analogue synth here.