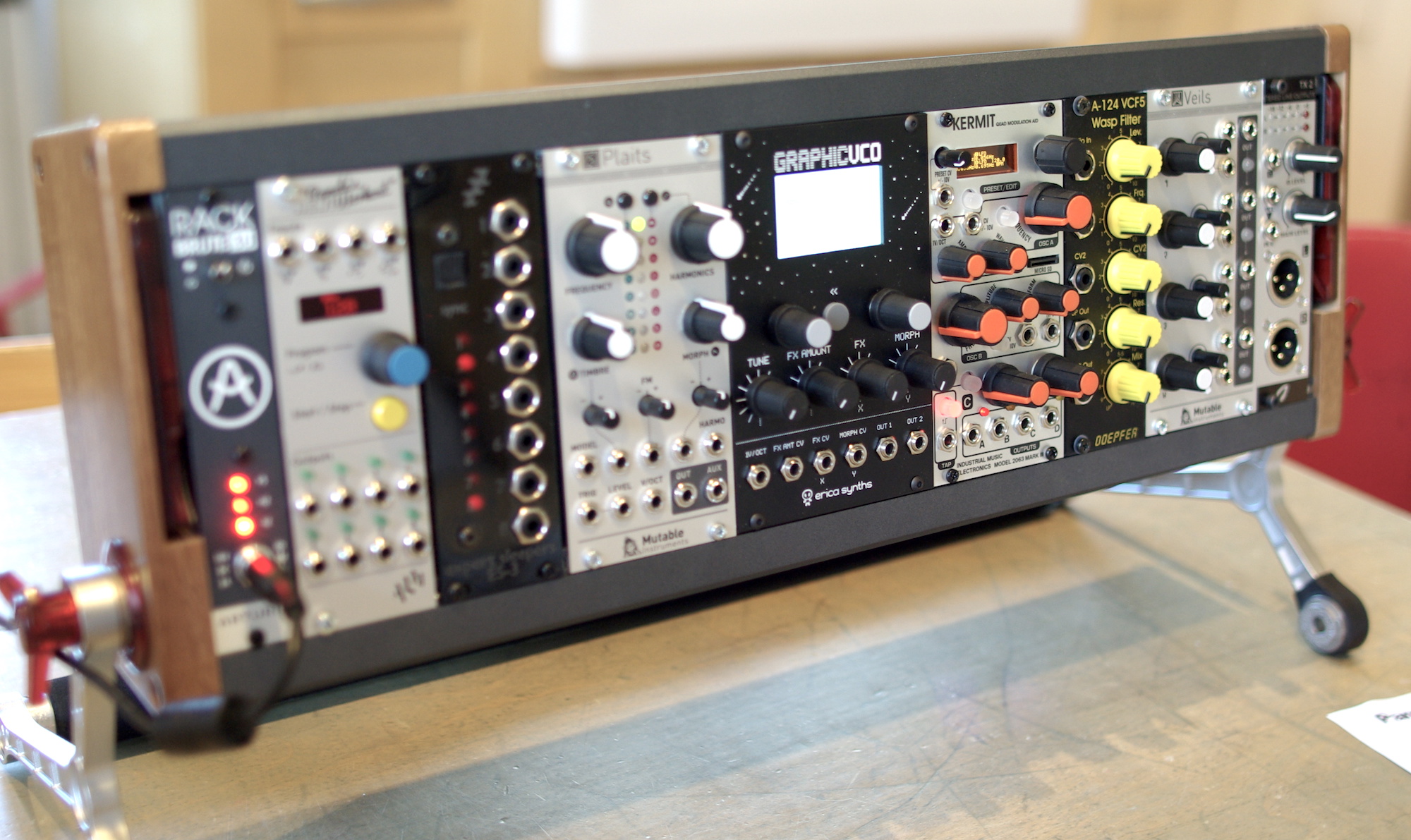 In our new modular round-up we’ll be reviewing a selection of the best new releases and restocks each month, shining a spotlight on our favourites from the fast-moving world of Eurorack.

For unknown reasons, the focus this month seems to be on filth. The Animal Factory Godeater was originally a bass guitar pedal, demoed at the Superbooth show way back in 2018 and finally arriving as a Eurorack module this month. 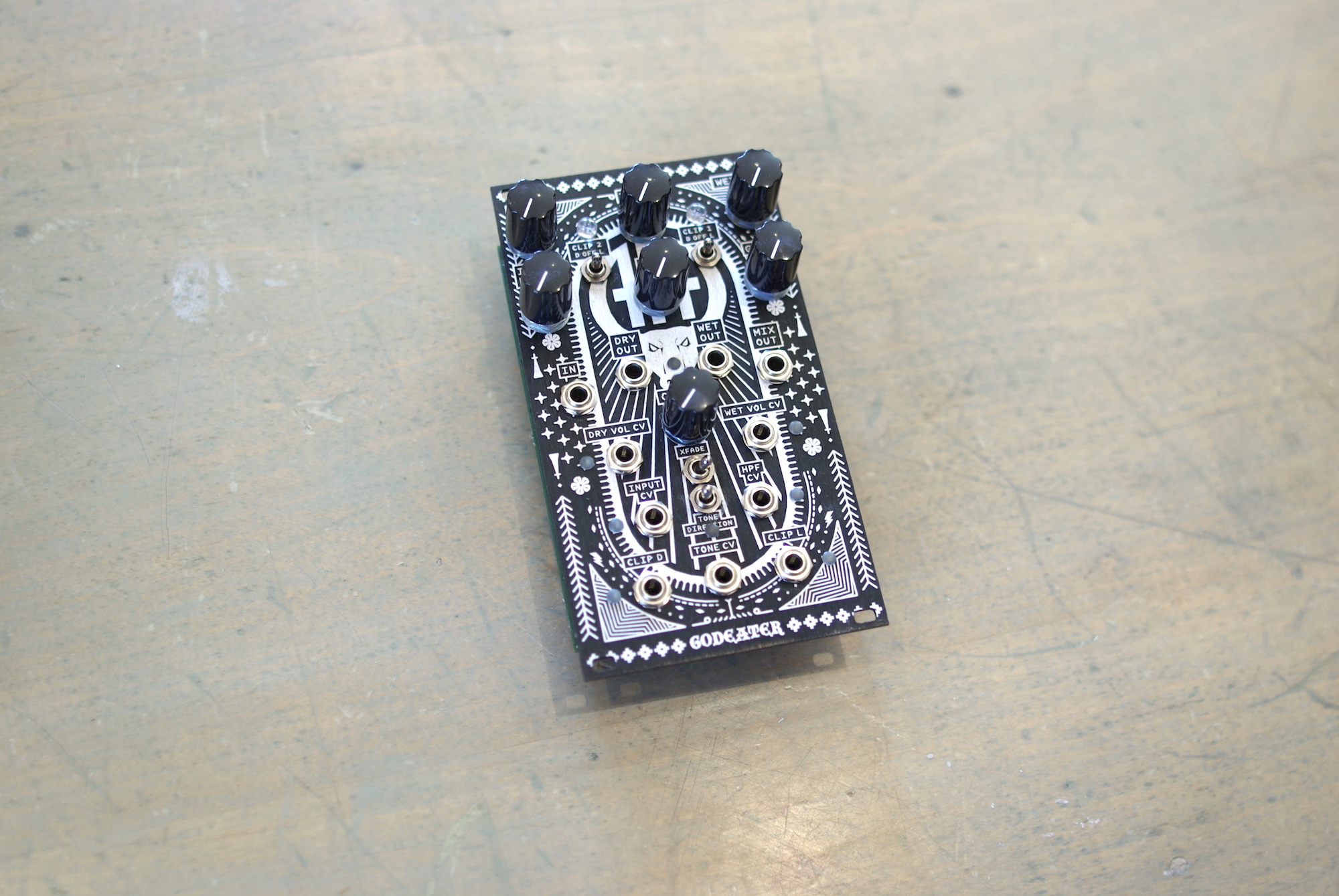 The concept is all about extreme crunch and saturation, addressing one of the major issues with distortion in that so many conventional distortion effects roll off the low-end of the signal as they adds harmonics. There are times when that works fine, helping to enhance midrange presence, but when distorting bass signals you can easily find yourself losing bottom end and having to dial in a sub-bass part to add back the weight. The primary objective of the Godeater is to apply distortion to low frequencies without losing any of the signal, but it’s also about extremes: not just a bit of distortion and bass but a LOT. Or, to put it in the brand’s own words, “so bass-heavy, it would wake up old Gods and Titans in the deepest abysses of Tartarus”. Fair enough.

As you’d expect, it’s a hell of a filthy module. The obvious application is on bass synths, and it comes as very little surprise that that’s exactly what the Godeater does best, excelling when fed with tight, subby basslines to create the kind of scuzzy bottom end that producers like Perc do so well. Exceptional stuff for the extreme ends of noisy techno and industrial.

AJH Synth’s Entropic Doom is a suitably aggro counterpart to the Godeater. In truth, they’re a bit too extreme to use together, but side by side they make an interesting comparison of two approaches: on the one hand, conventional distortion; on the other, very unconventional use of noise itself as an instrument. The Entropic Doom is essentially a tuned noise source (or as AJH call it, a ‘noisillator’) paired with a ringmod circuit for processing. The tuned noise is understandably a little more fiddly to control than running a conventional oscillator into distortion, but I found it was good for dialling in effects and droney sounds rather than attempting to tame it to create neat melodies and riffs. Once again, it’s probably one for the noisier end of techno but a very capable little module if that’s your thing.

After all that fuzz, Synthesis Technology’s E300 Ultra VCO comes as a bit of a relief. It’s a newly released Eurorack take on the legendary MOTM-300 module for the brand’s larger 5U format, produced in collaboration with synth pioneer Dave Rossum. 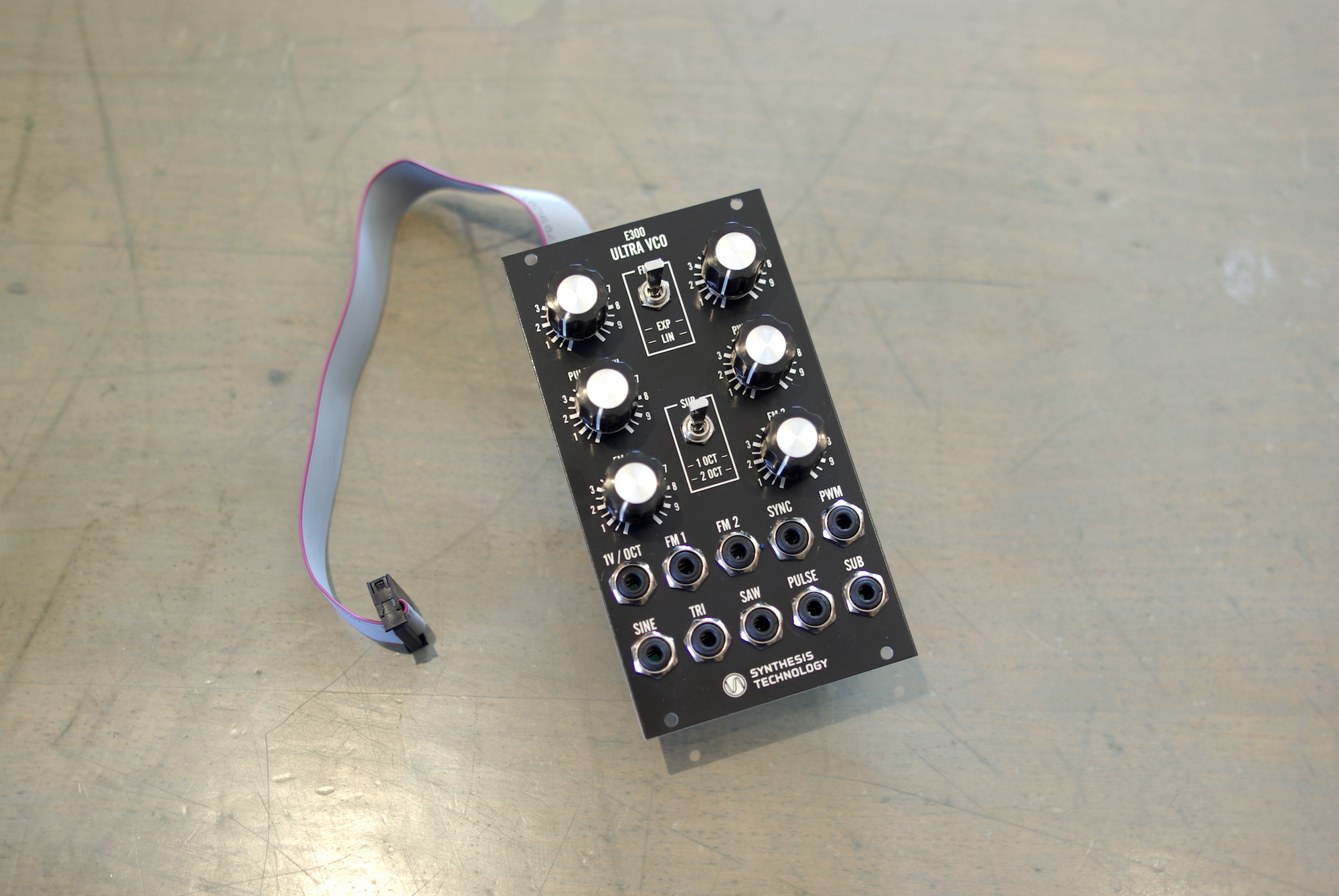 Painstakingly purist analogue synthesis has fallen out of favour a little bit recently as Eurorack brands have explored more experimental routes, but it’s good to be reminded just how good the classic approach can be. The E300 isn’t trying to be anything fancier than a good old-school VCO, albeit with ultra-precise tracking over 10 octaves and top-notch temperature compensation for pitch stability. All that precision would be pointless if the rest of the module didn’t match it, but it’s a fully-featured analogue VCO: sine, triangle, saw and pulse outputs, hard sync, FM, PWM and a sub-oscillator. You probably know what to expect in terms of sound: character isn’t the point here, just pure, clean waveforms. The soft sync option from the original MOTM-300 is missing, but that seems like a minor sacrifice. All in, easily one of the best old-school VCOs in Eurorack, suited for any classic analogue sounds.

The pace at which Erica Synths release new products is hard to keep up with at the best of times, but this month has been particularly busy. We’ve reviewed the brand’s Zen Delay collab with Ninja Tune in full already, and there are fresh announcements of new modules in the Fusion range. Meanwhile, we’ve got a restock of one of our favourites, the Graphic VCO. 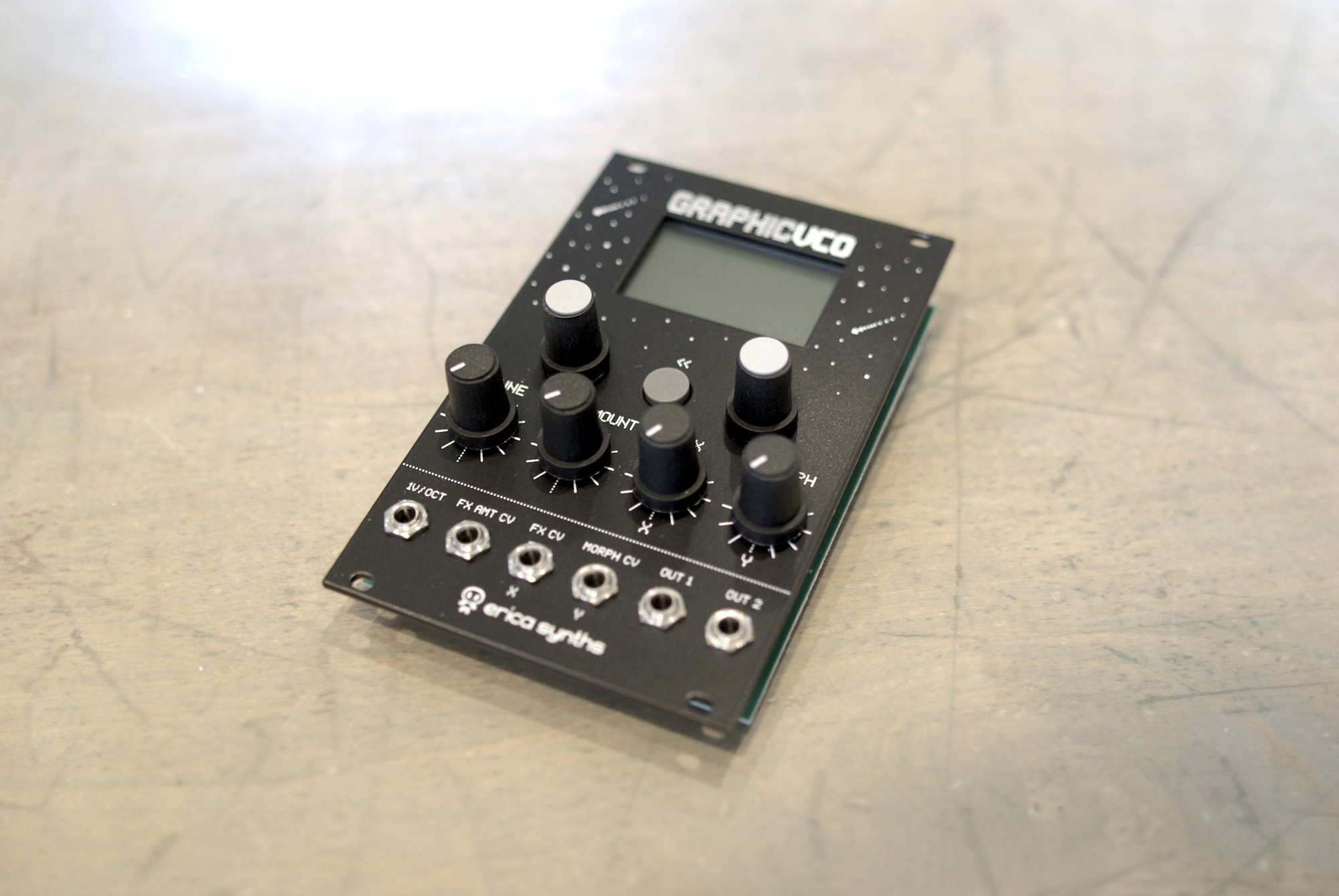 Once again, the Graphic VCO offers a really interesting comparison to the E300 when you place them side by side: they’re about as far-removed in terms of design ethos and sound as you can get, but both superb at what they do. The Graphic VCO is unashamedly digital, based around the wavetable synthesis method but not in thrall to any particular vintage synth approach or retro philosophy. Choose from preset wavetables, draw your own from scratch or upload via a USB socket on the back of the module, then morph between waves and apply effects (FM, phase distortion, ringmod, wavefold/wavewrap, bitcrush). It’s hugely versatile, doing pristine clarity just as well as wonky grit. A brilliant VCO with that rare potential to be ‘played’ live in real time, either by the three CV inputs for effects and morphing, or simply by twisting the knobs. If you could only have one oscillator in your rack, this would be a very strong contender.

Finally, a newly updated version of an incredibly deep modulation module. The Industrial Music Electronics Kermit MkIII is a new version of the brand’s original Kermit, which was effectively a very fancy dual LFO. Now described as a ‘quad modulation aid’, the Kermit has grown into a kind of modulation source/envelope generator/LFO/oscillator hybrid that’s almost overwhelmingly capable. What looks at first glance like a relatively simple LFO module turns out to go really deep. It can do morphing wavetable synthesis, load custom waveforms via microSD card slot and even internally modulate itself via a mod matrix. I expected the modulation power, but what particularly took me by surprise was what a nice oscillator Kermit has become, with waveform ‘character’ modes allowing you to morph and process your waveforms for added digital crunch – great for techy bass sounds in particular. 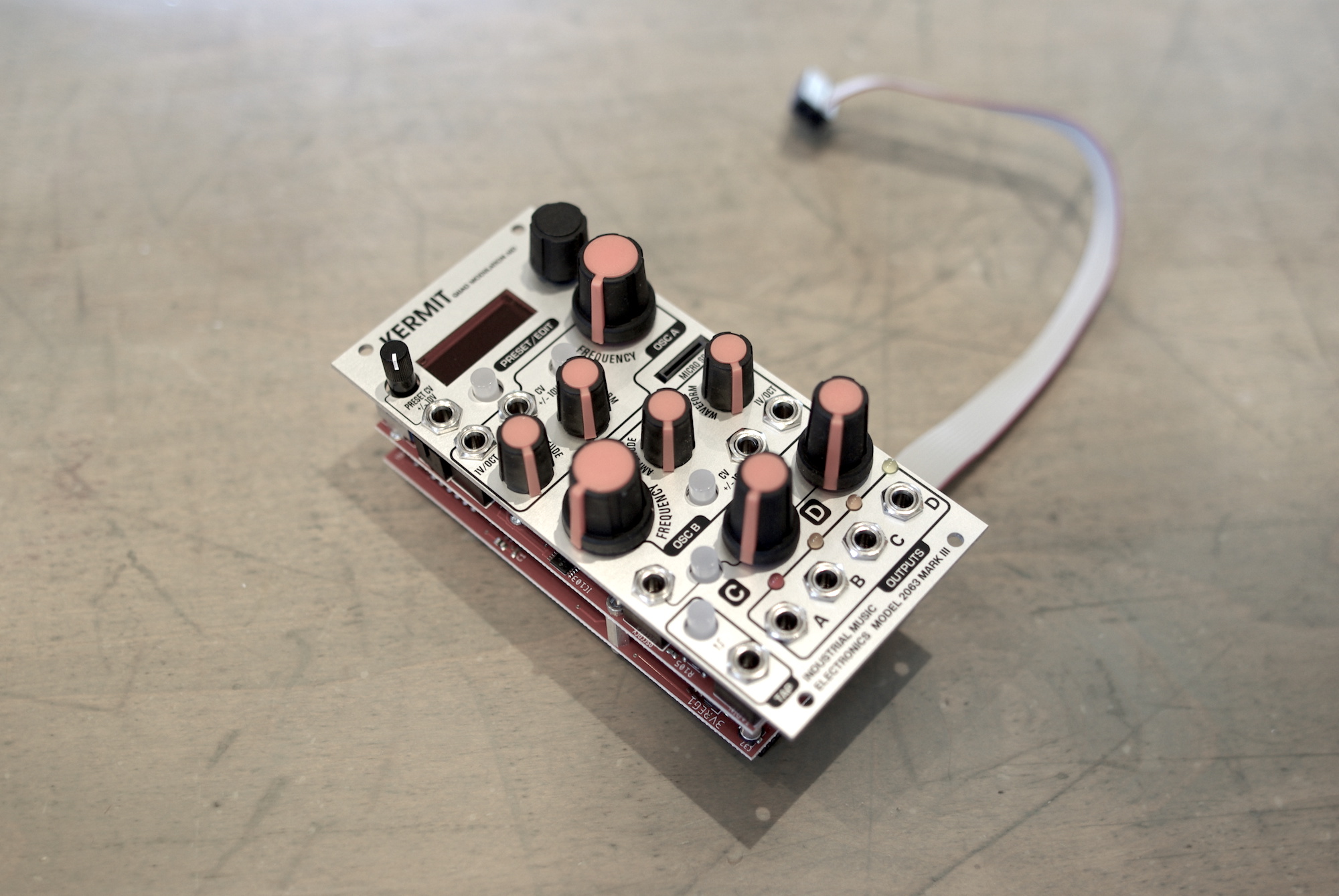 As part of the brand’s MkIII series, there’s also a strong emphasis on preset storage and repeatability, meaning that you can store complex settings and quickly recall them, which is ideal for live performance. I can’t help seeing Kermit almost as a distant cousin of ALM’s brilliant Pamela’s New Workout. Both seem like fairly straightforward modulation sources at first glance, but the deeper you dig, the more you realise how much they can do. It takes some effort to get to grips with just how deep its capabilities are, but it’s well worth it. Best of all, it packs a huge amount of functionality into a very small amount of rack space. Highly recommended.