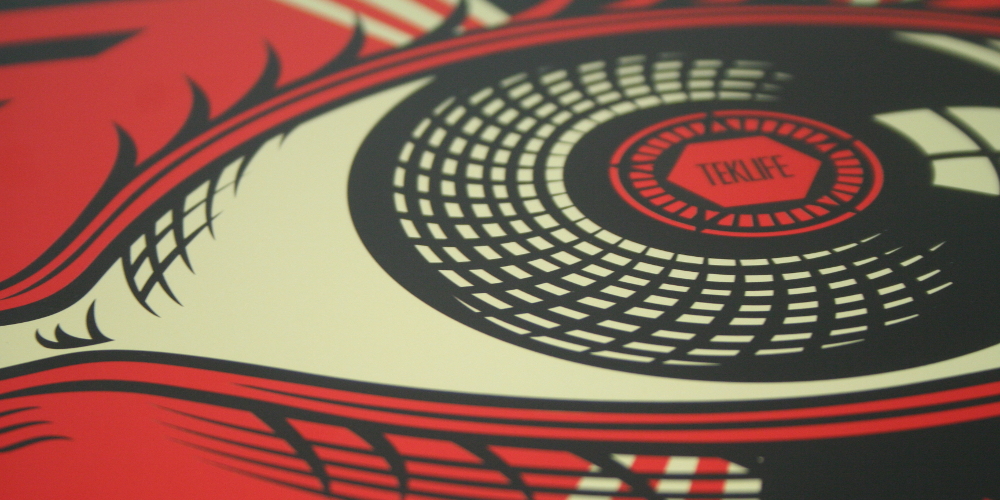 Records from DJ Earl, Ossia, CO/R, Motion Graphics, Versatile all made the grade this month.

Six records stood out in August and they can be split roughly between the vibrant, colourful and immediately eye-catching or the grubby and mysterious. Let’s commence with the former and where better to start than the DJ Earl album on Teklife whose collaborative bent extends to the artwork delivered jointly by Shepard Fairey and Ashes57. OBEY founder Fairey is probably one of the most recognisable (and controversial) names in modern graphic design and has a strong working relationship with Ashes57, dating back to 2012 when she documented several of his exhibitions and street art projects. Their cover illustration may admittedly offer up a fairly transparent interpretation of the album’s title, Open Your Eyes, but its a very striking one all the same.

As he discussed in a recently-published interview elsewhere on this site, the new self-titled Motion Graphics album from Joe Williams deals with themes of how we are all very hyper-connected these days. Without reading that feature you could probably assume this was the case from the hyper-realised artwork that adorns the album. We have visual arts and animation collective CultureSport to thank for that, conjuring up a richly detailed and evocative digital illustration of some strange android entity that complements the themes explored on their recent campaign of videos for the album.

A final colourful flourish for this month’s column came from the Tomorrow The Rain Will Fall Upwards album released on Blackest Ever Black. By the label’s own admission, Wreck His Days is an overly politicised album but this doesn’t necessarily manifest itself in the artwork beyond an inner sleeve dedication to “Jo Cox and all women throughout history who fought against hate and dedicated their lives to making a better world.” Wreck His Days does however grant Blackest Ever Black signee Carla dal Forno a chance to show her talents extend beyond music with two fine watercolour paintings featuring on the cover art and inner sleeve. Coupled with smart design from BEB regular Oliver Smith, the overall visual feel is minimalist and classy, leaving the listener free to ponder the thematic implications of the music. 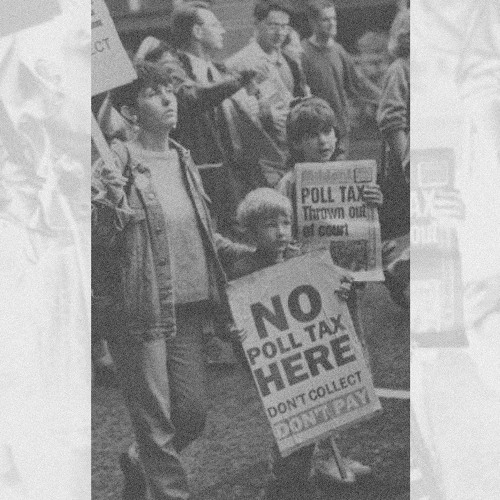 And so we turn to the less colourful and it makes sense to continue with a record with artwork that has political undertones. In reviewing the Gudrun 12″ from Joy Orbison and Herron’s CO/R collaboration, Tom Faber summed up the Hinge Finger release as “anxious music for anxious times,” and it is all too easy to compare the social unease of the ’80s era depicted on the artwork to the current post-Brexit malaise we all find ourselves in. And who is that boy holding an anti-Poll Tax placard Will Bankhead’s design touch ensures your gaze lands on? A young Herron!

Looking to celebrate the 20th anniversary of his Versatile label, it was unsurprising that Gilbert Cohen turned to an artist so closely associated with the Parisian mainstay in Nicolas ‘I:Cube’ Chaix for help. The two individuals handpicked tracks on the 25-track double CD, 1996 – 2016 – Versatile Records 20 Years, and Chaix was also involved in a belated 12″ sampler that landed in August. From some research it seems that Chaix rarely gets the chance to show off his obvious visual talent as The Eye Cube (what a pun!) on a record sleeve with just two prior credits to his name. On the basis of Chaix’s deft screen printing work for the vinyl sampler, this is a medium he should be coaxed into exploring with more regularity.

Finally, some words of praise for the Control / Information / Version doublepack from Ossia on Berceuse Heroique which could be listed as an example under the dictionary meaning of heavyweight. If you haven’t heard the music yet, I strongly suggest you spend some time with our stream of the record here as the Hotline, No Corner, Peng Sound and FuckPunk man has outdone himself. The presentation from the label is befitting of the music, with Berceuse Heroique seeking out the unheralded G.S.P. to deliver some murky photographic cover art whilst Ossia’s close ally Alex Digard of Studio Tape Echo provides an exquisite poster that conjures up Cold War imagery. The label are clearly fans of including posters in their releases when the occassion merits and Digard’s design joins a fine cast in Ken Sortais and Horfee as contributing artists for this irregular endeavour from Berceuse Heroique.