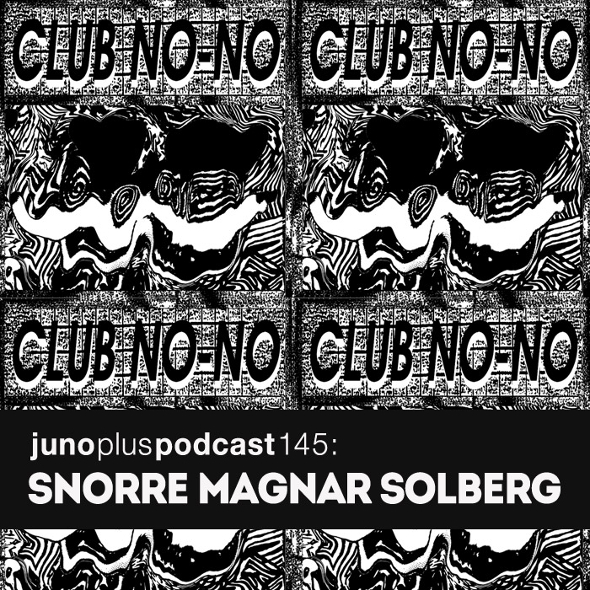 The man from Club No-No comes through with a selection spanning spectral ambient, darkly techno, gritty tribal rhythms, straight up rave tracks and other obscurities.

It’s no secret Juno Plus enjoys orbiting the bizarro-verse of labels like Sex Tags, Acido and SUED to General Elektro and sub-label Atelier which subsequently has sent us hurtling through the back catalogue of the now defunct Elektro Music Department. Within that world lies a colony of producers lead by the likes of DJ Sotofett and DJ Fett Burger, SVN and Dynamo Dreesen to Busen’s Daniel Pflumm and SW. to friends like Porn Sword Tobacco and Japan’s Takashi Wada (aka Tase with SVN). Furthermore, there’s the conclave of secret projects and collaborations putting out music under names like AU, E-GZR, PG Sounds, S.P. Posse and XI among many, many others. Borne into this system is Snorre Magnar Solberg, a Norwegian producer who, following a DIY, self-released 7” in 2013 that was limited to a run of 20, established the Club No-No platform in 2014 with a solo two-track 12” of home-made tribal techno.

With subsequent Club No-No releases tied up in DJ Sotofett and SVN collaborations at least half of Snorre Magnar Solberg’s name fell into the spotlight, and what defined his releases with Sex Tags and SUED bosses was the environmental ambience and African polyrhythms of the music, something SVN would later reference in an interview as “rainforest techno”. The best example of this is the A-side to SUE009, a track with as much flow and rhythm as any minimal banger whose incomprehensible drums and semi-beatless arrangements are as beguiling as its crepuscular textures and spotted percussion. The extended B-side of No-No 2 fuelled this brief Amazonian streak Sotofett, SVN and Solberg were responsible for producing, with five wild productions of roaring tigers amid shrills and shrieks of head hunters on the A-side providing a unique bent on future-sounding, 1950s and ‘60s-inspired exotica.

Club No-No is now, in its own rite, forging ahead in establishing itself as a self-sufficient platform, with Solberg going some distance to introduce new names like Tom Ace, Torstein Mills and Kristoffer Drevdal to the mix of aforementioned labels, producers and projects. Clearly cut out as a producer who knows how to program, find and sample drums, we searched out Solberg’s contact and put in a request for a mix not knowing if we’d ever hear anything in return. What landed in our inbox was a hour and seven minutes of spectral ambient, darkly techno and Raster-Noton electronics mixed alongside gritty tribal rhythms, straight up rave tracks and other obscure lo-fi house and breakbeat cuts from a sonic landscape we’re only beginning to explore.