End of an era for Jealous God 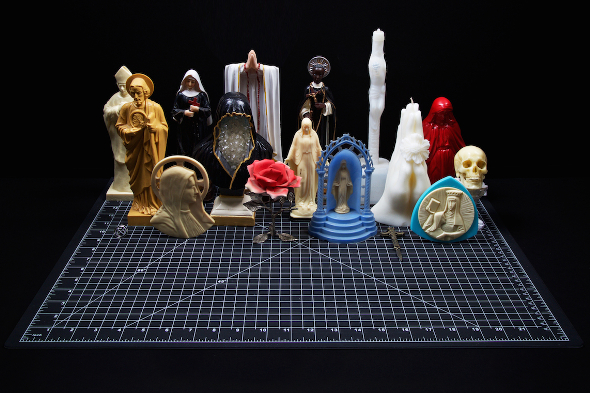 It was widely lamented when Sandwell District shut its doors in 2012 with Rrose’s Artificial Light (1969-1909) EP, with many feeling the withdrawal symptoms over the next 12-18 months by the void left by Silent Servant, Regis and Function’s departure as a collective. Nevertheless, in May 2013 news surfaced of a new venture, Jealous God, set up by Juan Mendez (aka Silent Servant), Karl O’Connor (Regis) and James Ruskin which launched with a split 12″ between Silent Servant and Semantica boss Svreca, aka SS/S. The label could be described as a rejuvenated incarnation of Sandwell District; however a fresh artistic direction and general aesthetic differentiated the new platform from the past which included specially curated Jealous God mix CDs and label paraphernalia.

Jealous God helped introduce Oliver Ho’s Broken English Club while coaxing In Aeternam Vale away from Minimal Wave for the first time since Laurent Prot reignited the project in 2012. Over the next two years or so the label gave rise to Lili Schulder’s 51717 alias and Phase Fatale, while shining a light on Danish duo Damien Dubrovnik to welcoming in the heavier techno sounds of Terence Fixmer and his Planete Rouge protege Alexey Volkov. In 2016, Tomas More’s December project was welcomed into the fold alongside Domenico Crisci and now the label have revealed a final run of releases are due ahead of the label’s eventual closure.

Jealous God’s final run of music will come from the likes of Alessandro Adriani, Beau Wanzer and Pye Corner Audio to other names in World Unknown affiliate Black Merlin, emerging artist Champagne Mirrors, to more Broken English Club before a final record from the bossman Silent Servant. Subsequent to this, Jealous God’s archive and distinctive identity will be captured as a book, ending the project on one final ‘artifact.’

Furthermore, Berlin’s Atonal Festival will help realise Jealous God’s final curtain call by helping present the Optimistic Decay label showcase, which is said to “exhibit some unexposed talents Mendez has scouted, highlighting both American and European acts.” You can watch a trailer featuring music from the aforementioned Champagne Mirrors for the event below.