The archival-minded offshoot of the Prague label will highlight the work of ’80s Czech act Omnibus for its inaugural release.

Describing themselves as an “independent multi-genre platform”, Prague’s Endless Illusion have been exploring and developing their passion for discovering traditional and different interests in music and wider culture since 2011. What began as a blog for founders Layup and Raphael Kosmos has grown naturally to encompass events and a label whose cross-format focus has taken in local Czech talent as well as the rest of Europe. DJ Overdose, Florian Büchel’s CCO project and Glasgow-based Stephen Lopkin among the latter artists to have featured on Endless Illusion. With a long-running show on Intergalactic FM also falling under the Endless Illusion banner, the Prague collective are further branching out with an archivally-minded project called Jupiter 08.

In actuality, the Roland-referencing platform dubbed ‘Archeology of Slavic Electronic Sound’ was launched just under a year ago and you can read a detailed manifesto on their website. Jupiter 08 is now preparing a debut vinyl transmission in the shape of a double LP presentation of unreleased material from early-’80s Czech primitive electronics act Omnibus. Formed in 1979 by Jarda Zajpt and Petr Dikan who met whilst studying at the Electronic High School in Czechoslovakia, Omnibus combined the former’s interest in Eno and King Crimson with the latter’s penchant for innovative music technology.

Active throughout the ’80s, Omnibus put out several self-released tapes of material and two of these form the basis of the upcoming Israels/Rhythmus (1980-85) retrospective on Jupiter 08. Some 23 tracks long, the double LP is split between remastered editions of the Israels tape recorded by Dikan and Zajpt between 1981 and ’82 and the Rhythmus cassette issued in 1985 when Omnibus featured further musicians. Previews are available below as four extended sections encompassing some 44 minutes of music, whilst the arrival of the Omnibus retrospective will see a new edition of the Jupiter 08 bulletin which features an interview with Jarda Zajpt. 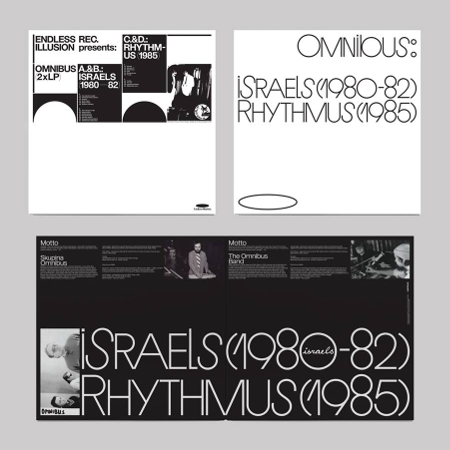