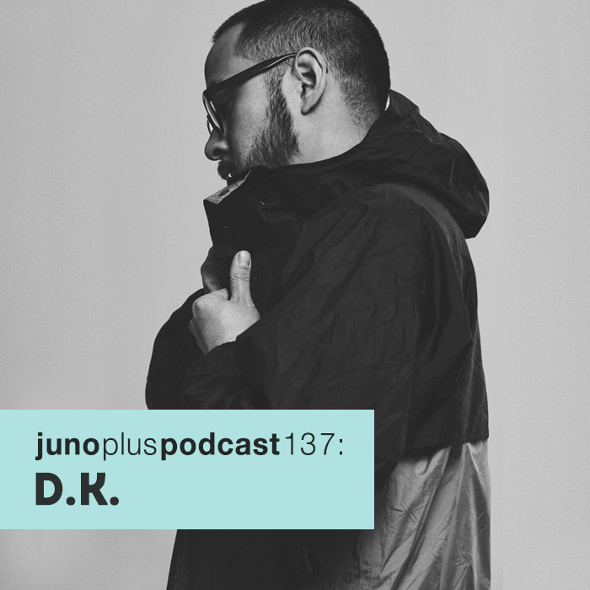 An impeccable hour of music encompassing funk, boogie, house and techno from the Antinote mainstay.

Covering the emergence of Dang Khoa Chau’s work as D.K. and 45 ACP over the past few years on Juno Plus has been a real pleasure. Known in a previous musical life as one half of Darabi alongside Low Jack, Chau first broke out as D.K. on Clem Meyer’s Get The Curse and Odd Frequencies labels in 2014 before finding his spiritual home in Antinote, the Paris label operated by Quentin ‘Zaltan’ Antinote. It is here, on Antinote, that the kind of Balearic boogie sound D.K. specialises in has really blossomed over the course of three records; the most recent being his second album, Island of Dreams. (You can stream that in full here)

It’s a mark of Chau’s talent that the Rennes-born producer’s 45 ACP project has developed such a distinctly different tone in concurrence to his D.K. output, finding a welcome recipient in L.I.E.S. Records and associated divisions. He’s also found time to revisit his obvious studio chemistry with Low Jack, the pair collaborating as Slack DJs for a 12″ of improvised experiments with FM synthesis for The Trilogy Tapes.

Fans of the D.K. mix for Test Pressing will know Chau’s quite the deep selector, so we were super keen to acquire a session for our own podcast series. The submitted 60-minute mix exudes quality, favouring tight and short blends and spanning several generations of music. Extra marks are awarded for the inclusion of our favourite Guy Cuevas track. Chau was kind enough to answer some questions regarding his relationship with Antinote, and his differing approaches to making music under both his aliases.

Hi Dang-Khoa, how are things?

All good, thanks mate!

Thanks a lot for doing this mix, how and where was it laid down?

I recorded this one at my place in Paris in the 11th arrondissement. I picked out some tracks that I had selected for a long b2b with my man Zaltan.

Was there any specific intention behind the selections?

First part is a selection of records that I use to listen at home or that I could play during a warm-up. The second part symbolizes what I’m currently playing in clubs.

You get a gold star for including our favourite Guy Cuevas jammer, where did you first come across his work?

Hahaha thanks man! To be completely honest, I came across his work while randomly listening to some Island Records releases a few years ago.

Did you seek out Gwen ‘Iueke’ Jamois for some inclusions on this mix from his legendary collection?

I haven’t had time to properly catch up with Gwen lately, but I definitely need to see him and buy some records from him soon. He owns a ridiculously good collection but you better have some cash to spend, haha!

The whole Antinote crew was recently over in London for a party at Corsica Studios, how did that go?

It was sick man. I always find it cooler when I’m on the road with the rest of the crew to play label nights. I had never played Corsica Studios before and I’ve got to admit that I was pleasantly surprised. The sound system is dope but what I liked the most is the booth which seems hidden in the main room. Honestly, I don’t really like the fact that quite a lot of the clubs put you on a big stage like you’re a band or something. I always found it a little bit awkward.

Did any particular track you play get the Corsica crowd crazy?

I played that “Primitive” track by Turn Table Tribal Tracks. It’s just a kind of dumb percussion loop with recurrent breaks but most of the time people go crazy on this one.

Let’s talk about your second D.K. album, Island Of Dreams, there’s a discernibly more contemplative mood to it. Why was that?

I like to propose something different on each record that I put out. I started composing this one last summer. Back then, I was listening to ambient and experimental a lot, like Vangelis Katsoulis, Craig Leon or Yasuaki Shimizu, stuff like that. I guess it drove me to make tracks featuring DX7 and Wavestation’s synth pads only. Around that time, I didn’t really know what to do with those demos. But the rest came up pretty naturally.

How long did it take to record?

At first, the idea wasn’t to release a proper LP. I spent like 2 months in the studio and ended up with a lot of new material. I gathered the most interesting tracks and worked on them a couple of weeks in order to have a coherent record.

Have you been happy with the reception to it?

It gave me the opportunity to work on other interesting projects, so I’m pretty happy yes.

What do you feel it is that makes Antinote the perfect label for your music as D.K.?

Music and aesthetic wise, we’re definitely on the same page. In my opinion, it’s pretty rare for a label to propose styles of music that are so diverse while having a global identity and direction that is so coherent. I know Zaltan really well now, we have a lot in common, and that’s why I feel totally free to send him the music that I want.

How would you describe the stylistic divide between your work as D.K. and 45 ACP?

As D.K., I mostly work on musical arrangements, melodies and editing, I don’t really care if it has to be dancefloor or not. My 45 ACP project is about working on sound textures and rhythm. It’s maybe more club-oriented, even though most of my tracks are very slow.

Is there any discernible difference in your recording approach or methods when making music under these two aliases?

Under my D.K. guise, I usually start with a simple rhythmic basis, record some synths live and then gradually add some arrangements. Editing is the longest part of the process. As 45 ACP, I like to use different drum machine programs and I usually spend most of my time experimenting, cutting and reworking on textures.

Can we expect some more 45 ACP material this year?

I have two EPs ready to go on L.I.E.S. and Russian Torrent Versions, first one will come out this spring and the other one next September, don’t know in which order yet…

Are there any projects from your contemporaries that you are really excited about right now?