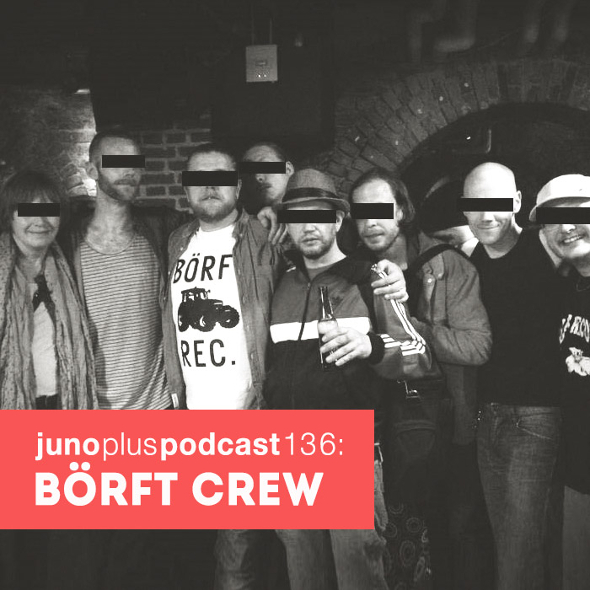 A lesson in sonic oddities straight from the Karlskrona studio of the mighty Börft Records.

Coming correct since 1987, there’s no doubting the legitimacy of the Börft Crew and their place in Scandinavian techno folklore. Before anyone in the town of Karlskrona had even imagined house music, the three plucky high schoolers that kicked off the phenomenon were performing live on synthesisers and drum machines that inspired their less than progressive audience to chase them down the road; the only escape being by way of their parents vehicles. Jan, Johan and Bjorn have stuck to their guns on the weird side of the fence ever since, most infamously as Frak.

Enjoying something of an upsurge of interest in their music following the general global trend towards hardware house and techno and other such neighbouring experimental delights, Frak and their own 29-year-old label Börft have been more readily visible in the past four years than they were for many moons. Trends may come and go, but Börft has stood firm as an outpost for all kinds of weird and wonderful music from artists you might never otherwise discover. Acidic gurgles and wonky synth lines abound in the label’s mountainous catalogue, but there is also space for heartfelt song writing, savage experimentation and sounds that simply make you say, ‘what?’

Considering there is always a plentiful amount of online content hovering around the Frak trio these days, when approached about a podcast we were kindly offered the chance to showcase a Börft Crew session, which throws convention to one side and plunges us straight into one of our strangest guest mixes to date. Spoken word surrealism and synapse-singeing sonics abound as the Crew takes us on a trip that helps affirm Börft’s status on an island of their own unique design. Join us for the adventure, won’t you?

Börft main man Jan Svensson was on hand to answer a round of questions to complement this divinely strange hour of music, touching on the origins of Frak, his first vinyl purchase and potential plans to celebrate the label’s 30th anniversary.

Thank you for this wonderful mix, it is a very strange experience indeed. Where were you sourcing such weird and wonderful sounds from?

This specific mix have material collected from a wide spectrum of time. Records bought when I was a kid, traded with similar labels, bought second hand etc…

How did you record the mix – was a sampler involved or is this a purely vinyl affair?

No sampler! Just two turntables and a mixer – straight vinyl only!

Have you always been an avid collector of curious sounds?

Got my first “own” vinyl LP from my older brother. It was an LP by Adam and the Ants, Prince Charming, sometime between 1981 and 1982. After that I was hooked and instead of buying candy and shit from the monthly cash from my parents, I bought one vinyl record every month till I started to earn my own money as a mannequin 13 years old. Then the collecting started to grow fast with bizarre music from all kind of (mostly) electronic music and noise: Severed Heads, SPK, DAF and SMERSH. Tapes too, they are important to mention!

Do you ever indulge in more traditional forms of club DJing?

It happens; I´m definitely not a pro DJ (you can hear) but love it when it happens. I love to do “Trash-mixes” as well with all kinds of sounds, but it does not fit at the average club floor…: )

It seems that the production and performances of Frak have been the main creative focus for the Börft crew over the decades. Is record buying normally reserved for private home listening?

I´m just a stupid collector and found out that there are so many records; I’m never again gonna listen to all of them again but I try to listen thru the past from time to time.

The interest in Frak’s music has really exploded in the past few years. Is it surprising to you after so many years of doing this?

FRAK as a band were almost dead more than ten years with only me behind the machines, aside from a few exceptions. When we celebrated the 20 year anniversary for Börft / FRAK in 2007, the original line up started to make “new” music in the studio and a have done a few gigs every year since. Why the other guys did not join in the silence years was simply because we didn’t live close to each other, not even in the same country…

Where is the world of Frak at right now? There have been releases for Dark Entries and Lux Rec, albums for Psychic Malmo and records on Börft – is the group set to continue releasing new material?

Def. YES! We try to meet at least once a month or more.

And what about the celebrated live performances? Is the famous foil headgear now back in storage?

I believe that FRAK will do it on stage again but there is no rush. But to reveal a little secret…The next year Börft and FRAK has existed for 30 years and there will be some sort of party to celebrate it. That moment is a perfect time to do a completely new gig by FRAK… INKONST, Malmö – Sweden is our goal to have the party at, we´ll see…

Börft continues to release a lot of material – 2015 was one of your busiest years yet. Are you getting sent lots of demos or are these all artists you have tracked down yourself?

A lot…of demos I can tell you. Only 1 of 100 or less results in some kind of release… There is simply no room/cash to release everything good-sounding that gets submitted. We want to take care of the artists that already have a foot in the soup and not being the label that only releases new names everytime.

Would you ever consider reissuing some of those early tape-only Börft releases from the ‘80s and ‘90s?

It has already happened with the classic techno tape by Ü, Great dose of monotonous techno, from 1992, re-released by Digitalis Ind. US. a few years ago. There is a ongoing work with digitisation of all masters. There will probably be some stuff coming out in different shades and places….

Do you see yourselves as representing the more alternative side of the Swedish /
Scandinavian techno scene?

We belongs to the “We Do Not Care” scene. We do care but are no followers and no leaders, we are BÖRFT!