Is it possible to release electronic music in 2016 that looks science-fiction inspired without being cliché? Obviously yes, but records that count for something which aren’t wonted permutations of Detroit techno fantasy, sub-aqueous electro or over-conceptualised ambient are few and far between. Looking at the cover art of this Continuum LP it would be easy for the more dismissive critics to write off the album as another work solely inspired by the imagination of Stanley Kubrick. Imagination, however, is a place devoid of impossibility, and soundtracks to come from the deeper reaches of someone’s mind, like Paul Jebanasam, are rarely short of brain popping. 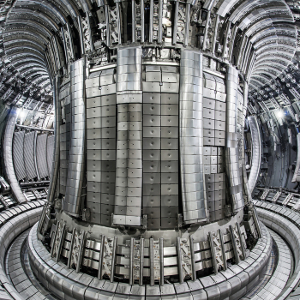 Boggling for starters are track titles like: “depart as _ air dx stop ∂ρ_∂ _dt somewhere = +∇⋅(ρ sigma_(y waiting -x) v)=0 ∂ρ_dy_dt for = you x dim”. Speak to Jebanasam and I’m sure there’s a real or conceptual explanation to the three formulas that make up the titles, but fortunately for the unlearned metaphysicians interested in the music there’s enough degree of artistic direction throughout the album to outweigh an overarching sense of hyper-intellectualism. This is techno after all, remember.

It’s safe to assume Continuum plays around with themes of space and time, so for the sake of the music let’s imagine the album’s artwork is a picture of a gravitron (not an actual fusion reactor) Jebanasam built to create 40-minutes of atom splitting ambient. The streaks of sound and melancholic atmospheres in Continuum do have an end-of-the-world-feel to them, but not in the morose, darkened sense of apocalypse you’d hear in Milton Bradley’s The End Of All Existence project. I like to think it’s a little closer to watching the world split apart from outer space viewed through the high tech lens of David Attenborough’s film crew; fluorescent bursts of colour, slow motion explosions, streaks of white light, weightlessness and hyper-speed. Imax for your ears.

The meteoric volley of eruptions and splintered sonics in Continuum don’t really sound like anything from earth but certain flashpoints of the music do hold a light to the stylistic triumphs of artists like William Basinski, Alva Noto and Leyland Kirby’s The Caretaker. Disintegrating synth tones add a melancholic crumble to fusions of classical and German-grade synthesis while fragments of radio static, white noise and crackle only intensifies a mood of remembrance, even oblivion.

Furthermore, seeing as Jebanasam’s productions come from the school of Subtext, bursts of pressurised frequencies like the Emptyset are capable of extracting crash into DMT-inducing surges of Roly Porter synth tones which makes Continuum feel like hurtling through a wormhole that’s time-stretching existence as we know it. Luckily for the imagination, this a good thing.