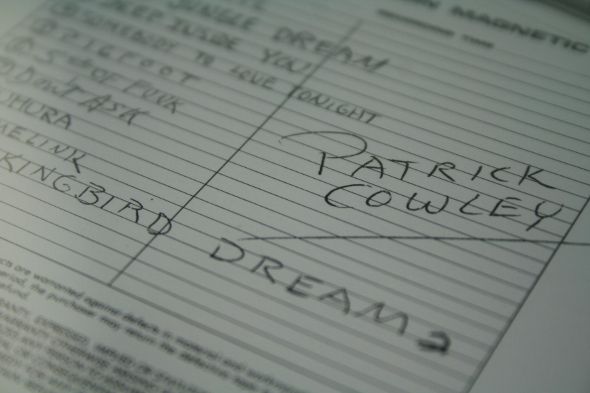 Back in the autumn of 2013, Dark Entries and Honey Soundsystem joined forces to shed new life onto the largely unknown early work of one of disco’s ost unique producers.  Before the release of School Daze, a compendium of early, largely experimental 1970s synthesizer recordings that ended up forming the soundtrack to the long-forgotten gay porn flick of the same name, most listeners knew Patrick Cowley for his work with Sylvester, or the throbbing, high-energy electronic disco of “Menergy”, “Megatron Man” and his infamous 15-minute extension of the Moroder-produced Donna Summer hit “I Feel Love”. His take on disco – rugged, surging, highly sexually charged and seemingly crafted with the bath houses, saunas and gay clubs of San Francisco in mind – was unique and ground breaking, but occasionally too masculine for straight audiences elsewhere.

These include a brilliantly haunting, strangely melancholic early version of “I Want You Tonight” – later to become a hit for Sylvester, of course – and a handful of tracks that sound like abandoned ideas for dancefloor explorations; the flute-laden, flash-fried jazz-funk of “5oz Of Funk”, and “Pigfoot”, a trip into bubbling disco-funk territory blessed with Cowley’s usual wild synthesizer lines, loose, live drums and a particularly jaunty synth bass-line.

The use of live instruments on these tracks, and others – see the haunting, Steve Hillage style guitar solos of the slow-burn synth-scape “Don’t Ask” – is particularly notable, given Cowley’s association with synthesizers and electronic hardware. This is Cowley as we’ve never seen him before, combining his inherent futurism with more traditional musical tropes. While these tracks are often impressive, it’s the more out-there, experimental fare that makes Muscle Up such a thrilling listen.

His explorations of moody ambience, in particular, are brilliant. “Uhura”, for example, is dark, intense and otherworldly, sounding like a fusion of Radiophonic Workshop creepiness, the fearlessly experimental sounds of Suzanne Ciani, and spacey ‘90s ambience – even if it was recorded in the mid-‘70s. “Timelink”, an epic trip into deep space that pre-dates Pete Namlook and Spacetime Continuum’s similarly intergalactic ambient experiments by 20 years, is even more impressive. Arguably best of all, though, is “The Jungle Dream”, whose feverish, hallucinogenic synthesizer lines, disconnected freestyle vocals, sparse jazz drums and tropical sound effects spread over 13 minutes somehow manage to sound both magical and deeply druggy.