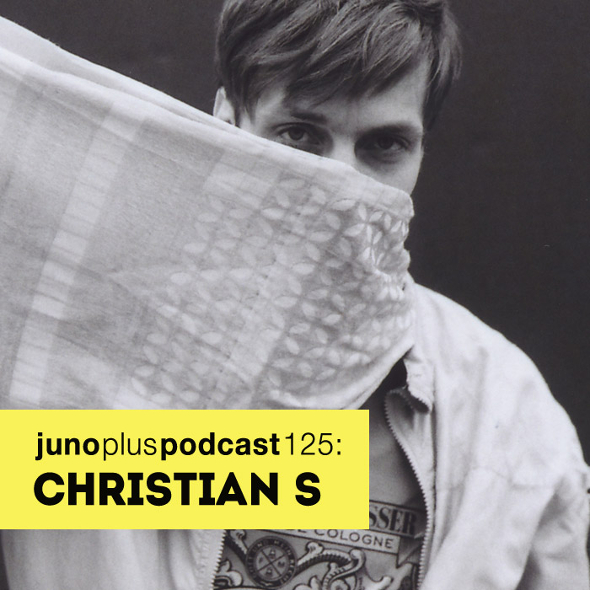 The Cómeme man showcases his mixing skills on an hour-long session of music new and old.

When was the last time you heard a truly memorable warm up DJ? Is this craft suffering as a result of promoters’ desire to ensure a filled club and their efforts to cram a line up with as many one hour sets from well known DJs as possible? When we profiled Lena Willikens in the spring, the trip to Düsseldorf and the Salon Des Amateurs uncovered an important caveat; her Cómeme label mate Christian S. is a master in the art of the warm up. Playing before Willikens, Schäfer (that’s what the S stands for) deployed all manner of house, disco and odd ’80s 12″ mixes to perfection, seducing a growing crowd into dancing. The pair would later go one for one as the Salon became an unholy sweatbox and the memories developed an alcohol-induced haze.

Christian Schäfer is clearly a DJ whose craft has been honed over many years, his long-running residency at Cologne club night African Drum ensuring the German is capable of playing both the warm up or peak time set. His selections that night in Düsseldorf left as much of a lasting impression as Willikens’ so it felt only right to offer him the chance to contribute to our podcast series. Some belated deadline setting resulted in Schäfer delivering an hour long mix that canvasses everything from fresh Optimo Trax to Young Marco and Wolf Müller remixes via classic Trax and No More’s Suicide Commando.

Schäfer is best known for his work on Cómeme, with his smattering of productions on the label complemented by his key role in their design process together with Cologne based artist Sarah Szczesny. Albums by Matias Aguayo, Phillip Gorbachev and Daniele Maloso on Cómeme have all featured Schäfer’s design. Aside from his affiliation to Matias Aguayo’s label, Schäfer’s profile as a designer has seen him involved in Cologne Music Week festival and he also holds down roles as a tutor at two German universities. He’s clearly a busy man, so we were happy Schäfer agreed to answer some questions on Cómeme, design, DJ, and more.

Hi Christian, how are things in Cologne?

Hey! Thank you! Things in Cologne are good. New clubs have opened or are opening soon. We have nice record stores, the city is growing. But today, November 11th, at 11:11 am the Carnival Season starts, which is a bit hardcore.

We asked for this mix after witnessing your warm up set at the Salon Ds Amateurs. Did you have anything specific in mind when selecting the records to include in this podcast?

Well, I wanted to have fun and do an entertaining mix with dance music. Besides that I didn’t have a masterplan. As with DJing in a club I like to keep it open and spontaneous. I always try to create an atmosphere and since the dancers are missing when I record at home the moods and rhythms are shifting more than in a club.

But I selected more “new” music than usual. Tracks like Merecumbe by Rionegro on Cómeme, Mr TC on Optimo Music, the Diegors Track out on the new Chilean label Discos Patos Carlos, Jan Schulte’s Africaine 808 remix and more.

As you’ve been DJing since the early ‘90s, are there any specific venues or cities that resonate the most with you?

Besides nights in the Salon Des Amateurs in Düsseldorf or the parties I do about twice a year with Korkut Elbay in an African Underground Restaurant in Cologne, I especially feel Brussels, Glasgow, Edinburgh and also more up north in Tromsø (Norway). Arriving in Tromsø to play for Insomnia Festival in October 2010 was really kind of overwhelming. But almost every place I visited this year was a good and interesting experience. Playing five gigs in Russia in April and May, three of them with Inga Mauer, was also quite special.

When we met in Düsseldorf earlier this year, you were preparing for a US tour with Matias Aguayo and Lena Willikens. How did that go?

I was involved in nine gigs in 10 days. We went from Philadelphia to Los Angeles via New York, Austin and San Francisco. I am happy that from time to time we have Cómeme nights or even tours, which means travelling and playing together with friends.

I didn’t see much of SWSX because we were playing all the time. But I liked the big river in Austin and the bats …

I imagine such a tour can be quite gruelling with all the late nights, lack of sleep, and travelling?

Yes, of course but that’s ok. Sometimes things feel quite psychedelic. One time, standing at some luggage belt, I didn’t know anymore where I came from and where I just arrived. Interesting moment.

Cómeme seems to have really blossomed in just six years, how did you get involved with Matias?

Many years ago I noticed Matias in the clubs of Cologne and after a little while of warily watching each other it happened that we were sitting in a car together, going to the seaside of France. We shot a little Super 8 Action movie there (which was destroyed before we could see it because Matias’ flat burned down). From there we got close and played a lot of nights together, organised parties and hosted a club night in Cologne for many years.

Like many of the artists on Cómeme, you don’t have many production credits to your name. Do you feel the pressure to make more music?

No, I don’t feel any pressure. I would consider myself more a DJ but I love messing around with my machines. After releasing my first EP last year I did a lot of remixes and now I am just happy to return to my own music again.

Your roles as both a designer and teacher keep you quite busy.

Yes, I try to keep everything in balance. Luckily all activities are connected through music. I do graphic design for music projects, I teach design to music students in Düsseldorf and I travel around to play records.

When you first became interested in design what were some of the artists that inspired you?

I think I was more inspired by the sensation of electronic music and going out as well as computers, record covers, photography and art in general. But here are a few names from the past: John Maeda, Peter Saville, David Hockney, Balthus, Jan Tschichold, William Eggleston…

And how about now? Who do you feeling is really pushing the barriers in design?

I don’t know. Where are the barriers in design? I think the last time the barriers in design have been really pushed was around the 1920s and before. Besides such superlatives I see a lot of stuff I like. Even In Cologne …. For example, I always appreciate the flyers and posters of young Kieran Rodrigez, who is also a DJ.

We run a monthly column for the best record sleeves on Juno Plus, and there tends to be few labels that appear regularly. Which labels do you feel yourself are really impressing in this medium?

I think Rush Hour are constantly delivering quality, however the sleeves I like most are often reissues – like Ben Cenac’s Dream 2 Science EP. I also like the style of Optimo, both the parties and label, and the sleeves of Hinge Finger.

Radio Cómeme seems to be really developing into a strong platform to hear some truly interesting music. Inga Mauer is a favourite here, but whose show has impressed you the most lately?

I was really enthusiastic about Sano’s new show called Bedroom Tapes. I love his idea of featuring only unreleased music, and while writing this I am listening to his second show! It’s great. Just raw, crazy, beautiful music, no egos. Very Cómeme in many ways.

Finally, what plans do you have next year in terms of new design and music projects?