Via App is 7 Headed

The New York artist returns to 1080p for the next edition of their fledgling 12″ series.

Three releases in and 1080p’s 12″ series already looks like a roaring success, with records by Project Pablo, Max McFerren, and Mall Grab all greedily snapped up by fans of the Vancouver label. The latter emergent Australian artist was new to Rich McFarlane’s label, however the next face to appear on a 1080p 12″ is most certainly familiar as Via App returns following her riotous 2014 cassette Dangerous Game. Featuring the marauding red-lining antics of “I Came To Win”, the album-length tape from Boston-born Dylan Scheer was among our favourite 1080p releases last year.

With no subsequent Via App output, Scheer’s return to 1080p is most welcome, especially as her music seems perfectly suited to the 12″ format. Due out later this month, the 7 Headed 12″ brandishes five all-new Via App tracks where “club kicks and twisted-up models of more recognizable dance formats hold together disjointed parts on the brink of collapse and knock them into hard grooves.” A nine-minute preview of the 12″ can be heard below and should give a sizeable hint of what to expect. 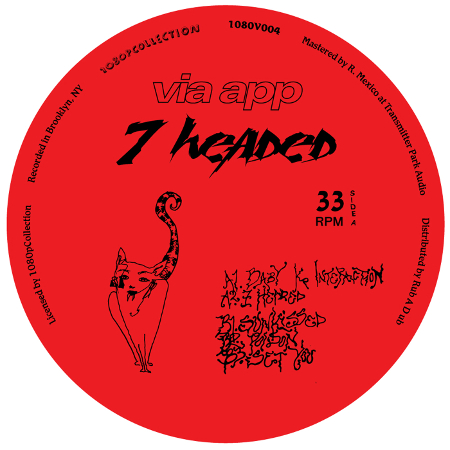