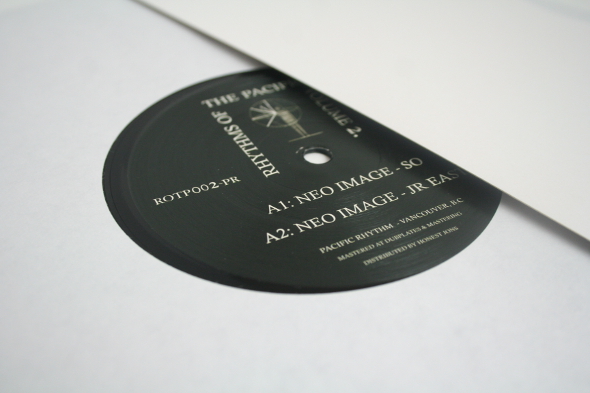 While the attention heaped on Vancouver’s blossoming electronic music scene has left some of its tight-lipped practitioners a little perplexed – Pender Street Steppers, in particular, have admitted in private that they’re finding the attention a little baffling – there’s little doubt there’s something inspirational happening on the “Canadian Riviera”. Of course, we all now know about the collective of DJs and musicians behind the Mood Hut label, and the cassette enthusiasts that run the much discussed 1080p imprint. Less is known, though, about the crew behind Pacific Rhythm, an online vinyl mail order service turned record label, and now record store. 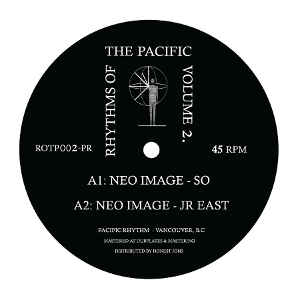 Whether or not Pacific Rhythm’s bricks-and-mortar store – opened in February – acts as a communal hang-out for DJs, producers and scene characters, there’s no doubt that it puts them in a privileged position at the centre of Vancouver’s fast-rising scene. Their connections to Mood Hut and 1080p are well known, and it was from these two stables that they recruited the artists featured on last year’s brilliant label debut release, Rhythms of the Pacific Volume 1. Boasting contributions from Cloudface, Hashman Deejay and Lnrdcroy, amongst others, the EP offered a neat definition of the now-familiar Vancouver sound – all dreamy analogue house deepness, wild machine workouts and undulating box jams.

Wisely, this long-delayed follow-up 12” takes a different approach, serving up a quartet of tracks from some lesser-known, but no less talented, local producers. For starters, two tracks come from Neo Image, a name largely unknown outside of the Vancouver scene. Complementing him are Florist and D. Tiffany; the former was responsible for a fine recent 12″ on Glasgow label All Caps but little else, and the latter a prior contributor to 1080p with a tape under the Xophie Xweetland pseudonym that slipped out, almost unnoticed, back in 2013.

There’s no doubt the decision to focus on some of Vancouver’s less celebrated names was a wise one. While many of the city’s now familiar musical trademarks are present – the languid, new-age influenced chords, the early ‘90s ambient house textures, and a reliance on dusty drum machines and distorted beats – all three artists offer something a little different from the perceived norm.

This dedication to broken, off-kilter rhythms can also be heard on Florist’s “112712”, whose skittish beats tip a cap to experimental techno. Even so, the blissfulness of the producer’s piano flourishes and yearning chords guarantees a laidback feel totally in keeping with the now-familiar Vancouver narrative. That particular Canadian trait is explored further on the EP’s final moment, the dubbed-out, soft touch ambient house bliss of D. Tiffany’s “Orange Crush (Plush Managements Mix)”. While utterly beguiling and intoxicating – thanks, in no small part, to her use of repetitive synthesizer melodies and quietly bubbling electronics – it’s in some ways less appealing than the rest of the EP. As good as it is, it personally feels a little out of step with the far-sighted futurism and scene-altering sounds showcased elsewhere on the 12”.