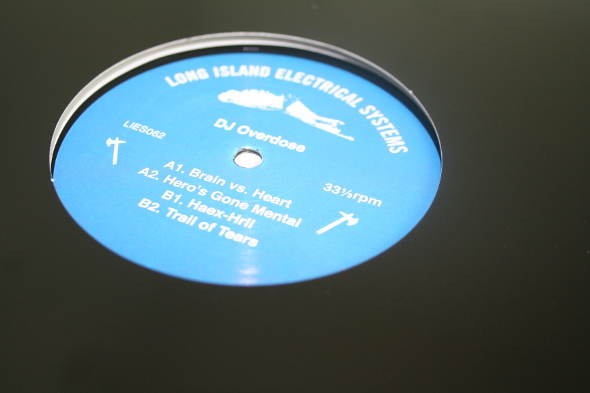 The latest debut on Ron Morelli’s label seems like an unusual musical choice, but there is no doubt DJ Overdose and L.I.E.S. are ideologically and historically connected. He belongs to that wave of Dutch artists who provided inspiration to Morelli and William Burnett at the turn of the ’00s (Overdose has already released on Burnett’s WT label as Model Man) – and he shares a similar DIY approach to production with other artists on the L.I.E.S. roster. However, while Overdose’s music is raw, it is never under-produced, and this four-tracker sees him bring a range of influences to his rough electro sound. 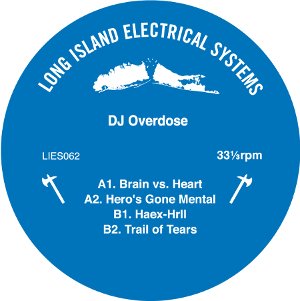 “Brain vs Heart” kick starts the release with a fast and furious rhythm to which Overdose adds in catchy synth hooks, like a half-tuned radio transmitting a long-forgotten ‘80s hit. The title track sees him adopt a radically different tact; staccato beats underscore jittery rhythms as robotic tones vie for the listener’s attention. It’s the most overtly electro track on the 12”. “Trail of Tears” also sees Overdose return to the ‘80s, but on this occasion it’s to take inspiration from menacing EBM bass. Coupled with shrieking industrial riffs and a rhythm that creep along, it makes for one of the more original contemporary interpretations of this sound.

The highlight of this release is “Haex Hril”. It sees Overdose revisit his love of soundtracks, which formed the basis for his last album, the excellent Bizarro World, but with a twist. This time, it’s the brave new world of Vangelis synths rather than a Carpenter dystopia that provide the influence. Coupled with a tearing bass and the tightest drums since UR made their declaration of Electronic Warfare, “Haex Hril” is a stellar finale to a EP that is full of uncompromising Overdose attitude.