RVNG Intl. has found in Kerry Leimer the gift that keeps on giving, and they’re not quite done with him yet. After the critically acclaimed release of the K. Leimer retrospective A Period of Review last year, here comes the artist’s less fluttery, less romantic production, less Music for Films, or indeed Airports, and more My Life in the Bush of Ghosts. The Eno comparisons seem to continuously abound in what regards the man’s work, but this LP is actually more controlled, much cleaner and less epic than that particular Eno / Byrne collaboration. In fact despite Leimer’s fame as king of Seattle underground ambient, it’s probably the jittery American neuroticism that Byrne brought to that album which resonates most powerfully in Leimer’s work as Savant. 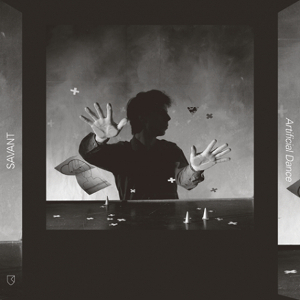 This double Artificial Dance LP recompiles tracks put out as Savant between 1981 and 1983 on Leimer’s own Palace of Lights label, which served as an output channel for a number of friends and collaborators, many of whom also worked on these recordings: a small but captivating scene. There are also bits and pieces which see the light on this RVNG Intl. edition for the first time. The general landscape is a sort of intensely ‘80s beachy ambient, which very artfully conjugates a whole range of disparate suggestions: minimalist tingles alternate with funk impressions, paranoid political spiels sit side by side with sumptuous tribal rhythms, a quasi-academic research sits happily with a feeling for the vast.

This is a very 1980s virtue, and it’s something that fell out of fashion at one point, or we lost our appetite, or we forgot how to do it, or we got less curious about the world, I don’t know. In any event, the record conjures up a world of electric blue rooms, Texan billboards, blue jeans and Persian carpets. It’s dated; a dated imagination, and dated images. But that’s probably exactly why it’s worth paying attention to it, because it reminds us of a kind of short-lived sensibility which might just be resurfacing in our little contemporary hearts.

The 14-track journey guides the listener through a variety of landscapes, as eclectic in atmosphere as Leimer’s clearly eclectic, many-talented personality. The opening tracks, “Using Words” and “Indifference” are beautifully concentrated, minimal-tropical pieces, crystalline open soundscapes with swirling bass. The record progresses onto a number of variations on similar themes. “Heart of Stillness”, “The Shining Hour” and “Shadow in Deceit” all show a Leimer interested in modifying sound, in creating a million micro-variations in texture, rhythm, density. On an almost serial pattern, in which structures are repeated, fast-fowarded and rewound, a number of glassy, insectoid elements and multi-scented pitter-patters seem to flutter into the foreground and fall back out again. This results in a kind of uneven sonic flow perfectly balanced between organic and inorganic, betweed woodiness and synthesis.

Then, there’s a more sombre side to the work, and a more electric side. The funky-but-frozen “Stationary Dance” and the starker “Sensible Music”, released as a 12’’ in 1981, attest to another kind of dark, sharp intelligence, and are highlights along with the slow, dusky, and very sensual shores of “Falling at Two Speeds”, “Fault Index” the “The Radio”. The latter notable for what sounds like found recordings about radio-love and barking dogs filtered and deformed over swarms of big, metallic sounds and rigorous thin little beats.