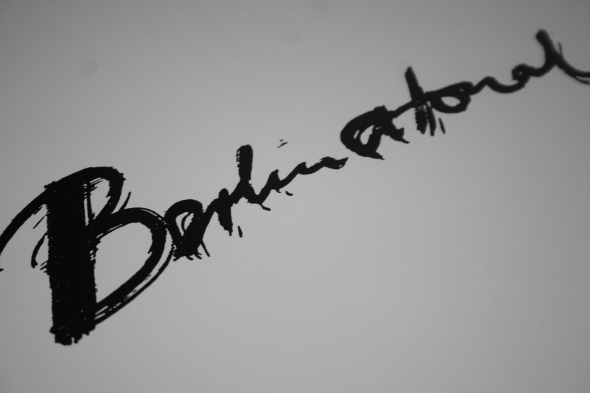 Having been picked up by Big Dada amongst others with his unique twists on all kinds of electronic tinkerings across the style spectrum, it was a great tragedy that Ewan Robertson passed away in 2012 just as he was hitting his creative stride. Being an imaginative, prolific soul, there was of course plenty of unreleased and unfinished material left lingering on his hard drive, and now Big Dada and the Robertson family have finished putting together a retrospective release that brings many of these creations to light as an apt tribute. The sheer variety on offer across this self-titled release hints at the many avenues Robertson could have taken his musical career down, from scratchy garage rock jams to lopsided post-punk funk, twitchy house experiments and upbeat synth pop, all played out with a heartfelt honesty.
Listen/buy vinyl 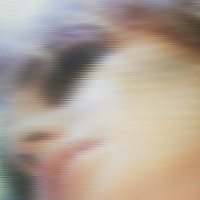 In the cult of movie directors with the credentials to inspire artists for years to come, David Cronenberg is surely up there with his namesake Lynch and John Carpenter as a favoured jump off point for musicians, painters and more besides. Danny Passarella (he of Passarella Death Squad notoriety) has invited British industrial techno champ Perc to join him in paying tribute to one of Cronenberg’s finest moments by giving it a new soundtrack, inaugurating the new Passarella label in the process. There is plenty of thematic inspiration to be found in the ever-relevant message of Videodrome, and Passarella and Perc take to the task with aplomb, weaving dense and haunting pads and strings in an amorphous channeling of bleak future shock. It’s certainly not a cheery listening experience, but it’s a thoroughly immersive one.
Listen/buy vinyl

The rapid exchange of information has certainly lent itself to the development and exposure of provincial music scenes the world over, as ever more kids get hooked up to the internet and meld sounds from other places with their own cultural context. Until now, many people in the Western world were probably not so familiar with the sound of Peru, and so Tiger’s Milk and Strut have joined forces to serve up a thoroughly researched and wildly exciting documentation of the bass-loaded sounds emanating from that particular corner of South America. The styles are utterly thrilling, from the nagging drum workout “El Carmen” by Tribilin Sound to the jazzy inflections of Pirana Sound System’s “Naranja Limones”, shining a light on sounds that could come from no other place and time.
Listen/buy vinyl

After Batu kicked off his Timedance label with the excellent Cardinal/Domino Theory 12”, he now turns his attentions to a new talent in the shape of L.SAE, who is on hand with an interpretation of bassweight experimentalism that is all his own. There is some seriously psychoactive tinkering at work in the construction of “The West End As It Will Be”, where strange layers of distortion dart around the mix with uneasy melodics, the drums shimmy and shift about the place and an unrelenting eeriness hangs heavy over everything. “Line Sunk Like I’m Sunk” is no less surreal in its make up, still able to hit heavy even as it shifts around all manner of percussive blasts, dread bass notes and plenty more besides. It’s a head-spinning record on both sides, and that’s exactly what makes it so essential.
Listen/buy vinyl

There’s quite a justifiable buzz around Beatrice Dillon at present, following her previous appearances on The Trilogy Tapes, The Vinyl Factory, and Where To Now? It’s the latter that she returns to now with three highly distinctive tracks which further round out this intriguing emergent musical character. “Face A” kicks off on a wonderful concoction of dubby minimal clicks and cuts overlaid with a dominant, delightfully brutish synth line that fuzzes with a measured amount of distortion. “Face B” continues the same dubby theme but drops the lairy synth in favour of letting more gentle elements such as skronky saxophone come caterwauling into the mix. “Sonnier (Walk In The Light)” drapes itself across the B-side with a slower remit that lets all kinds of fizzing delay experimentation ping out over a simple scuffed drum beat in a fine celebration of outboard oddness.
Listen/buy vinyl 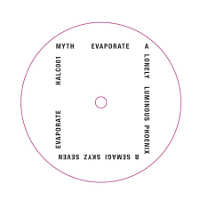 What with Rabit riding high on a wave of activity following the recent announcement of his debut album on Tri Angle, the fast-rising Texan has started up his own label and kicked it into action with the engaging sounds of Myth. Compared to his label boss’ abrasive fusions, the Myth approach is a more measured adaptation of grime sensibilities, with a consistent melancholic tone to the bright and clean lead synth lines that populate the whole of Evaporate. It’s in this simple, clear delivery that Myth affords himself the space to communicate a thoroughly emotive message suited to autumnal climes. Indeed all seven tracks served up here hang together with a great consistency, making it a perfect mood record to fit a specific situation. For inventive grime variations with tones of feeling, look no further.
Listen/buy vinyl

Belgian label Vlek have been doing sterling work in supporting leftfield electronics for a good five years now, carrying releases by the likes of Cupp Cave/Ssaliva, Sagat and Wanda Group amongst other lesser known artists. Coming back for his second outing on the label, Lawrence Le Doux has some sublime twists on the deep house standard to impart across four tracks. Both “Floor” and “Liquide” deal in submerged, subtly spooky tones with sizzling drums given a light sprinkling of dust, like a slightly more lo-fi variation on the theme espoused by Fred P et al. There’s a vintage electronica feel to the warbling melody that runs through “Pollution”, and then “Story” rounds the EP out with a pleasant beatless excursion through grubby bleeps forced upon lolloping delays.
Listen/buy vinyl

Having emerged from the mists of the City Centre Offices-affiliated electronica scene, Porn Sword Tobacco is on something of a renaissance tip at the moment with strong connections being forged with the Acido/ SVN posse and releases popping up on Kontra-Musik and Mule Musiq amongst others. With this new house-inflected slant to his sound, he makes a return to Aniara with a double pack of wondrous, imaginative sounds that are a joy to listen to as much as to dance to. From the delicate long form evolution of the title track to the crunchy dub escapade “Vildvuxen Galax” with SVN, at every turn the sounds crackle with electricity and originality, while being completely immediate and enjoyable at the same time. “Jobbet” has a cheeky bassline kink that makes the track feel like a strung out vision of Metro Area, while a more electro-powered message is intoned on “Kristallisering” before the blissed out Rhodes vision of “Enkel Disco For Hand”.
Listen/buy vinyl

With the 2015 edition only just been and gone, Berlin Atonal is well and truly back on the festival map after having done great things for experimental music through the 80s. The eclectic line-up reaches towards the new vanguard of industrial, noise, drone and techno, as well as nodding to a few of the old guard. For this weighty triple vinyl release, a spread of 2014’s guests have been captured, including two stunning tracks by Cabaret Voltaire that hold court over the first disc. On the second vinyl Miles Whittaker is present with an uneasy trickle of minimal techno and coldwave, while Fis brings a dangerous amount of reverb to the table. Then Abdullah Rashim is left to spread languorously over the third and final platter in an immersive bath of rippling tones typical of the Swede’s inimitable approach.
Listen/buy vinyl

It’s been a while since some fresh Edward material landed after he seemed so very present a couple of years prior, but fear not as he’s back on his usual stomping ground of Giegling with more of that otherworldly wonder that makes his tracks so utterly compelling. “Open” is possibly the most restrained of the bunch with its neatly clipped beat and charming warbling melody, while the title track “Birds” spins in a distant, metallic reverie made up swooning melodies and dusty drums. “Dolt” has whispers of Edward’s Desert Sky alias about it, albeit with a more prominent groove at its heart, and then a stout house beat comes marching through for “She Says”, resplendent with double bass rubs and an upbeat but mysterious spirit. It’s good to see that the ideas are still striding forth from one of the leading lights of the Giegling crew, even if the records are coming out with less frequency.
Listen/buy vinyl