Kuedo – Assertion Of A Surrounding Presence 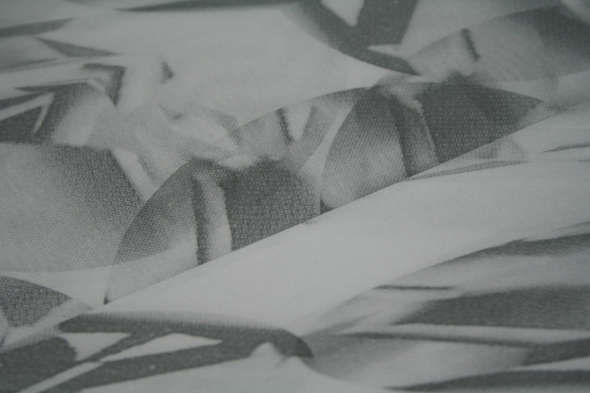 It was surprising news when Jamie ‘Kuedo’ Teasdale and Joe Shakespeare announced Knives, a joint platform for music, visual art and graphic design in May. There have rarely been any signs of activity by Kuedo since Severant, his 2011 album, which shaped his vision of retro leaning sci-fi music. Together with Roly Porter as Vex’d, Teasdale was one of the innovators in dubstep, but Severant demonstrated a progression to work with detailed sounds of synthesizers and customized beats that stem from Footwork and contemporary Hip-Hop. It showed an intellectual approach to music but the tracks and Kuedo’s DJ sets are still strongly connected to bass heavy club music.

With Knives, it seemed that Teasdale has moved away from the dance floor slightly to focus on highly mind drilling sounds. Their first record by J.G. Biberkopf was a multidimensional radio play that juxtaposed synthesizers, human interaction, artificial machines and sounds of nature. It was more of a sound installation than record for the dance, yet still energetic and good. After that inauguration it wasn’t really clear what to expect from the second release by Kuedo himself. On Assertion Of A Surrounding Presence, he continues to pursue his view on sci-fi music but steps from retro into the near future. This does create a world merely shaped by high-tech, containing unpredictable factors that seem rooted in nature.

The opening track “Vertical Stack” sounds awe-inspiring, like a cinematic, infinite panorama. Growling drones make the body shiver, pan flutes add mystical atmosphere. With “Border State Collapse” we reach the outskirts of a futuristic yet ancient megacity. Sirens approach the ears through melodic and shimmering sounds of bells. Thundering bass drums brutally break through, accompanied by hectic hi-hats. They lead over to a monotone, percussive bass synth pattern in “Boundary Regulation”, which Kuedo produced with the assistance of Night Slugs affiliate Egyptrixx. Small sounds shimmer in the background before a drum loop like a jangling machine approaches. “Case Type Classification” has an Ambient vibe to it with minimalistic fractals of drums and weirdly organic yet at the same time artificial sounds.

Similar to this strange melange of natural and artificial feeling is the thrilling cry of the voice that is the core of “Eyeless Angel Intervention”. Together with Mind: Body: Fitness, Kuedo made a stirring club track based on these incorporeal sounds. The pumping bass drum feels like the heartbeat of a massive creature. This track embraces the feeling of fast styles like footwork, drum’n’bass and breakbeat techno and makes for an energizing tool. “Event Tracking across Populated Terrain” sees Kuedo joining forces with his former Vex’d-partner Roly Porter. Bells set the tone of this piece of ambient, every now and then a vibration shakes the landscape. Sirens appear in the thick dust. They don’t evoke panic but more of an uneasy feeling. It is a sign of a broken world, where there is a constant feeling of silent insecurity.

The last track “Cellular Perimeter” takes up on that with bass that is used not as melodic instrument but reduced to noise divided into patterns. Hi-hats at breakneck speed and crashing snares outline a rhythm that has ancestry in Footwork. The overall design of the track references club music but lifts it to an abstract level. It has the essence of it but does not need explicit formulations. The tremendous mass of the music doesn’t let control it with dance moves, it unchangeably stands in front of the speakers. A morphing, shimmering, flickering sculpture of sound that mirrors the tininess of humanity. Assertion Of A Surrounding Presence embodies the sonic physicality of rave music while transporting ideas and visions that trigger the listener’s minds. It causes tension between stunning and moving, between a paralysing dystopic scenario and the impression of having possibilities to participate in the designs of the future.