Now some two years old, it has become quite commonplace for some of the cassette releases on Rich MacFarlane’s 1080p label to subsequently get licensed for vinyl release by other labels. Firecracker’s sumptuous re-edition of Lnrdcroy’s Much Less Normal is the most high profile example, but Growing Bag Records and Faux Pas Musique should also be recognised for their efforts in transferring 1080p releases from Moon B and Khotin respectively to the vinyl format. Perhaps this is why 1080p have elected to launch their own 12″ series, though such a move has felt like a logical one for a label whose growth has been exponential.

Due out before the end of August, the I Want To Believe 12″ revisits the cassette of the same name by ASL Singles Club man Project Pablo that was released back in February for a “special wax edition”. Given the hook-laden nature of much of that cassette, I Want To Believe is arguably perfect for such a transition with three tracks appearing on this 12″ along with a new ‘Dandana’ mix of “Follow It Up”. Previews of all four tracks can be heard below. We await details of further vinyl transmissions from 1080p with interest, whilst European fans of the label should check out Pablo and Max McFerren on their little tour of the continent’s nightclub venues with UK associate Scientific Dreamz Of U.

1080p will release I Want To Believe by Project Pablo on August 28. 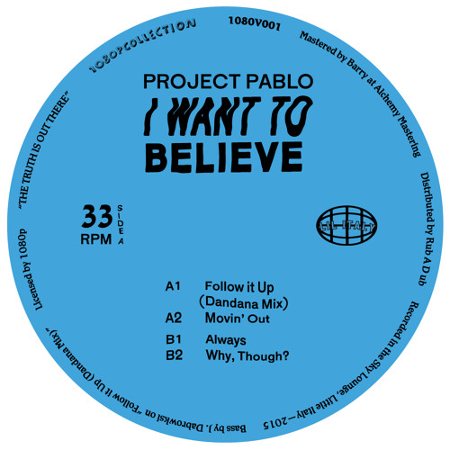