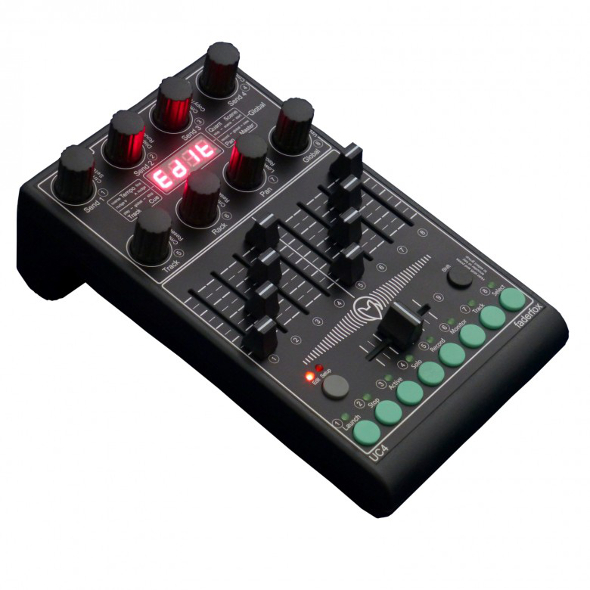 Faderfox’s latest controller may be compact but this doesn’t mean it’s short on functions.

MIDI controllers are generally thought of as tools for performance, not studio equipment with character. We find it easy to attribute character to synths, drum machines, FX units or instruments because they directly influence tone or timber in sound. Controllers, however, are still ungraced by any sort of romance or nostalgia. The trend, since the early ‘00s, was that controllers had to anticipate every possible need from their users. Only in recent years did we start to look at limitation as a great starting point for better design of MIDI interfaces. The Micromodul series of Faderfox MIDI controllers embody exactly this: a less-is-more approach that doesn’t try to frankenstein all possible uses for MIDI into one single machine.

Instead of mashing together a two-octave keyboard and launch pad cluttered by faders, buttons and knobs, this controller simultaneously appeals to musicians and knob-fiddlers by presenting a well-built, elegantly designed and compact unit that’s optimised for specific uses, while remaining open-ended as far as customisation and routing possibilities go.

Now on their fourth generation of ultra-compact MIDI modules, Faderfox present the UC4, an upgrade on the now discontinued UC3. There’s close resemblance to the former, and aside from a new line of buttons and few subtle layout adjustments, the basic architecture of the UC series is left untouched. Each family of assignable controls is again presented in groups of eight; from push-encoder knobs at the top, faders below and green buttons at the bottom. Each of these can then control up to eight different parameters – although not simultaneously – covering a lot more ground than expected from such small dimensions.

As expected, plugging into Ableton is a cinch and like most controllers it connects via USB and you can start MIDI-mapping instantly. For my chosen set up, Push-encoder 1 is now my cut off on a soft synth, and the acceleration on the knob allows me to jump from meticulously slow changes to a super-fast and abrupt opening of the filter. For each individual encoder you can set an independent acceleration value by pressing Shift Edit, and this can be applied to a lot of other parameters. These include choosing the type of command (to make it work as an on/off switch, for example), selecting a specific MIDI channel or defining the course of a fader or knob between a minimum and a maximum value. 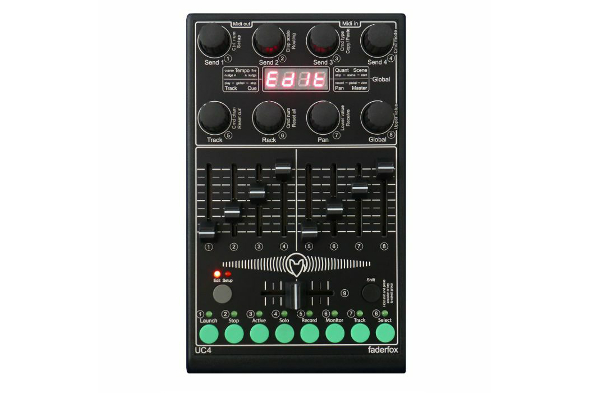 The push button on each push-encoder knob, as well as the green buttons on the bottom, can be individually setup from the Edit menu to either send note data or to function as an on/off switch or trigger clips. Those more inclined to deliver the odd bit of improv in the mix will find buttons serve this purpose well. In fact Faderfox have managed to design these controls in such a way that fingers don’t erroneously stumble across each other when in the zone.

The Shift button is this product’s highlight. By pressing any control after shift will select one of eight groups for each family of controls. That means that in total, per setup, you can assign 8 x 8 parameters to each family, which means a total 64 knobs, 64 push, 64 buttons and 64 faders. This is a great advantage for live act set ups that are bit more demanding. And, for example, setting up a push-encoder to more than one parameter on Ableton, and jumping between those functions by simply changing group – Shift + push-encoder 1 to 8 – didn’t feel half as clumsy and indirect as I thought.

While at first the UC4 might seem too small and toy-like, it quickly became clear this updated version is far from what you see at face value. From my experience this is as far – and clever – as you can go to get the most of out of a MIDI controller this size. It definitely won’t be the right gear for playing musicians looking for expression at their fingertips, and it could be too limited for big productions and studio and live setups that are a bit more complex, but for the touring electronic music artist looking for a reliable, highly portable solution to use in a relatively simple setup, this fits the bill.