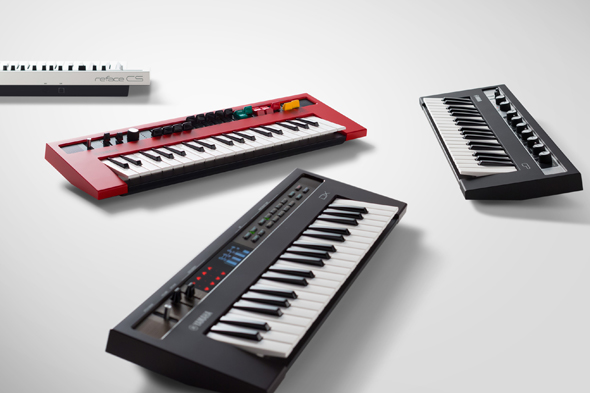 It seems that if you’re in the business of making electronic music production hardware these days, it pays to look back as much as forward. Trends in music have certainly returned the warmth and character of analogue drum machines and synths, and so the likes of Roland have been busy reviving their most prized creations from the past forty years with a few modern conveniences woven into a build that studio classicists know and love. Yamaha certainly have their own arsenal of lauded hardware to delve back into, from the iconic FM organ sounds of the DX7 to the gluttonous weight of the CS80, and so it’s surprising that up until now we’ve not seen them edging any revivalist products into the marketplace.

After a teased-out promotion campaign that gave little actual detail away, the Japanese manufacturer has now lifted the lid on their latest range of four synths banded together under the reface banner. One of the key factors of these new devices is their diminutive size, aimed at touring musicians and those wishing to create sound wherever inspiration strikes. The focus the manufacturers have placed on global connectivity equally considers the needs of the modern artist. The Yamaha Soundmondo online hub allows devices to be synced over the Internet and sounds to be shared instantly.

All four models are tributes to prior Yamaha synths rather than straight-up rehashes. The reface CS analogue synthesiser offers eight voice and five oscillator polyphony, with a slider based interface for maximum tweaking potential. The reface DX is unsurprisingly an FM synthesiser once again featuring eight voice polyphony, while the reface CP electric piano revives the Stage Keyboards Yamaha were building in the 70s through Spectral Component Modelling. The reface YC is an update of the classic design of the drawbar organ, with all the familiar paddles and sliders present within the compact design, not to mention five different models of organ.

As well as the online connectivity, the reface synths come with iOS apps for mobile devices to ensure sounds can be captured, stored and managed on the go without the need for an accompanying laptop, and with a retail price starting around £347 they’re a thoroughly affordable option in what appears to be a highly convenient package.

Yamaha will release the reface synthesiser range in September.