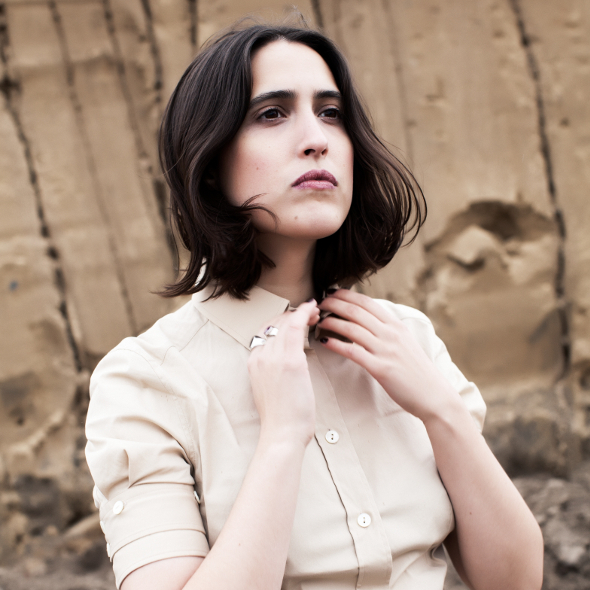 We speak to the Hamburg DJ and producer about her new label which will arrive next month with a debut release by Children Of Leir.

Last week brought the exciting news that Helena Hauff is to issue her debut album, Discreet Desires, through Werk Discs / Ninja Tune in September. It’s the culmination of a prolific two years as a producer for the Hamburg selector, with her debut release for the same label followed by output for PAN, Solar One, Lux Rec, Panzerkreuz, and Handmade Birds. Throughout this time, Hauff has of course maintained a busy DJing schedule, and she’s also started to perform with James Dean Brown as live hardware act Hypnobeat. It’s the experiences of meeting people in these situations that has lead Hauff to launch her own record label Return To Disorder, which you have probably heard the German discuss in recent interviews.

Next month sees the label issue its debut release, a self-titled EP from Leicester-based psych-rock outfit Children Of Leir. Not the type of music you would immediately associate with Hauff on the basis of her pummelling DJ sets, which suggests Return To Disorder will be a label dictated by her listening tastes too. In order to formally introduce Return To Disorder, we sent Hauff a series of questions on her motivations for starting the label, how she discovered Children Of Leir, what else she has planned and how her debut album is shaping up. You can also listen to one of the tracks from Children Of Leir’s record below.

Hi Helena, you’ve hinted at Return To Disorder for a while now, what were your motivations behind starting the label?

I just met so many great and talented people on my journeys that I felt the need to create a platform for those artists. At the beginning I thought that it was a bit pointless starting yet another label, there are so many great ones out there already but then I realized that there’s no label combining Psych Rock and Techno stuff really (fuck knows if it’s gonna work). And I thought if I’m really excited about something I may as well release it!

Was there a specific reason for the name?

There was an art movement after World War 1 named Return To Order wanting to go back to a more conservative form of art rejecting the pre-war avant-garde. And when I released my record on Panzerkreuz it was exactly 100 years after the start of the war. I just liked to turn that name around and play with the ideas of Futurism. The other thing is that I wanna release everything I like on the label in no particular order. Also, I’m very chaotic myself… So it seems to make sense.

How did you come to work with Children of Leir for the first release?

I saw this band Cherry Choke live in Berlin, really enjoyed the gig and kept in touch with them and when one of them started a new project, Children Of Leir, I just really loved their stuff and decided that I wanted to release it.

They sound quite different to what one would expect from your DJ sets, so is Return To Disorder a reflection of your listening tastes as well as music you might play out?

Definitely. There isn’t gonna be any theme to the label, it’s just gonna be music that I really enjoy listening to or playing out.

The second release comes from Morah, did you discover him whilst playing in Athens?

Yes. He is an amazing DJ and he played a few of his own tracks to me and I loved those. I signed these tracks about a year ago. Actually the first record was supposed to come out last year, but the pressing plant I worked with went bust. I lost a lot of money and more importantly a lot of time. I wouldn’t care but it’s not a nice feeling for an artist having to wait for your release for that long.

Will the label feature your own music or will you be using it as a platform to promote other talent?

Both. I’m gonna release my own stuff in the future, I think.

Finally, we are quite excited about your upcoming album on Werk Discs; what should people expect from it when Discreet Desires arrives in September?

It’s way more melodic than the stuff I did in the past but it’s just as rough.