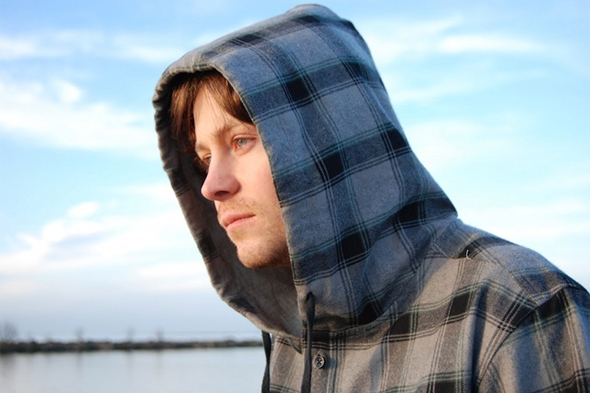 Barry Lynn swaps Boxcutter for his other alias on a new album for Touch Sensitive.

It may only be eagle-eyed of Boxcutter  devotees that clocked the self-titled album he released as The Host on Planet Mu back in 2012. At the time, the last Boxcutter album The Dissolve was but a year old, and the increasing prevalence of live instrumentation in Barry Lynn’s once-guttural, dubstep-mutated sound suggested that there was softer music lingering in his imagination awaiting an outlet. What followed was a charming trip through brief ambient vignettes with arch titles such as “Neo-Geocities”, “Angel Fire” and “Tryptamine Sweep”, and it was the last album we heard from Lynn. In the mean time he has popped up on his own Kinnego Flux label with short-form Boxcutter EPs, but in truth he has always come across more naturally as an album producer.

Now The Host project has been reignited with an album called Esalen Lectures for the Touch Sensitive label last seen issuing a compilation by Cherrystones. It’s the first of Lynn’s albums that hasn’t come to light on Planet Mu, and it represents an even bolder move into abstract ambience and soothing new age tones. There are plenty of flurries of instrumentation, from reversing guitars to laconic, hand-wrought synth lines, and this time around the vague “internet archaeology” concept that lingered over the first album has been replaced by an equally sweeping impetus. The Esalen Institute, a retreat for humanistic alternative education in Big Sur, California, is the likely inspiration for the title of the release.

As the press release would have it, the album has been informed by, “think tanks and floatation tanks, psychological research, 2012 mythology, 1960’s social planning, stoned apes, elite transhumanism, and the counter-culture.” We hit up Mr. Lynn to provide some further insight into the motivations behind the album concept, and while he was reluctant to give too much away in the face of personal listener interpretation, he did have this to say:

“It is pretty conceptual, a kind of sideways look at psychedelic culture. The last Host album was inspired by millennial Netscape counterculture and the impending 2012 predictions, so this one is a bit darker in reaction to that. It’s getting into conspiratorial stuff, social planning, stuff like that. The cover features Marlborough House, one of Craigavon’s most brutal looking buildings, near where I grew up. Craigavon was another weird 60s experiment in urban planning so I thought there was a nice parallel there.”

Ahead of the album’s release, we have an exclusive stream of “Peri-Natal Imprinting” available to check out in the player below, while “World Citizen” is up in full over on the Boxcutter SoundCloud page.

Touch Sensitive will release Esalen Lectures by The Host on August 14.

A1. Begin
A2. Praxis I
A3. World Citizen
A4. Submersion
A5. Peri-Natal Imprinting
A6. Praxis II
A7. Primate Change
A8. Suggestogen
A9. Sunset Induction
B1. Minerva Dreamstate
B2. Subproject 58
B3. Belief Formation
B4. Neo-Primitive
B5. DARPA Spectrum
B6. Praxis III