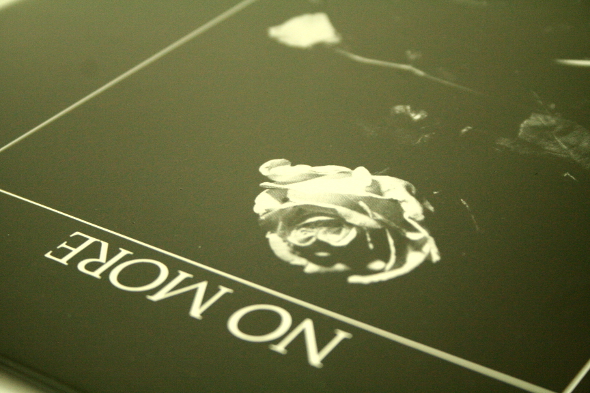 Dark Entries continues its copious and eclectic 2015 with an adventure into some of the most legendary stuff to pour out of the German 1980s. Hardly a sunny record, No More’s A Rose is a Rose compiles the band’s early discographic output, the EPs A Rose is a Rose, Too Late and the Suicide Commando 7’’, into a tightly-packed, luscious whole. 50 minutes of succulent, protean, and paranoid goth-synth-post punk guaranteed to add spikes to any kind of glossy early summer fantasy you might be having. The period chronicled here covers the very early 1980s, when the German trio (Andy A. Schwarz, Tina Sanudakura, Christian Darc) developed a rough, jittery sound equally at home with the post-Kraftwerkian minimalists and with the most infernal, angst-ridden, youthful goth-punk. 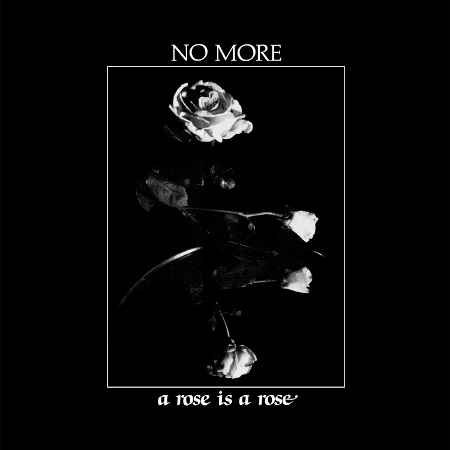 It was in this period that the group spawned its most well-known track, “Suicide Commando” – a bleepy, tinny anthem for the disaffected – which quite brilliantly conjugates a very German minimalist sensibility with a Lou Reed-ish taste for storytelling. Here they self-consciously describe the urban fauna of a certain scene (‘she was my dark haired Lydia of my suburban German dreams. And he was the boy called James. And it will all end up like the New York scene. Too much drugs, and too much pills, too much lies.’). For those of you who never let their curiosity stretch very far beyond “Suicide Commando” or its environs (I confess to belong among this group) Dark Entries reveal that a whole lot more was going on in No More, sonically but also emotionally, aesthetically.

The record opens on the quasi-tribal “Drums of Algir”, drums reminiscent of Pornography-era Cure but with a wonderful goth synth-line, which leads into a dense, metallic valley of angst, in which the hardness of a post-punk heart is always brilliantly tempered by interesting choices of electronic sounds. The deeply paranoid “Caged Heat” (‘I’m afraid of white suits’) opens onto “Something Grows Up”, which would be a rather ten-a-penny post-punk ballad were it not for Tina Sanudakura’s synthesis, glistening in the back like an aspirin in a glass of sparkling water, and onto “Hypnotized” and “Dim the Lights”, both tense, angry pieces, with the latter sounding almost like a more-aware-of-modernity Christian Death. The most interesting aspect of the first part of the LP is the production, which does nothing to hide the records’ original 4-track-TEAC-in-a-laundry-room set-up and as such reveals the band’s jaggedness and also their energy. You can almost ‘hear the room’, and there’s a particular kind of emotional force to it.

The record evolves attesting to the band’s gradual transformation (although studios, Dark Entries assures, were still never used). The belly of the LP, containing some of the more synth-oriented 1981 tracks (including “Suicide Commando”), carries a certain wit which, though perfectly organic to the band’s sound, shows us yet another side of No More’s work. The angst gets more elegant, more self-assured, the lyrics less self-centred and more filmic. “In a White Room” is a particulalrly gorgeous description of a certain kind of generational bewilderment, an existential poem told over tinny, extremely minimal drum machines, almost stripping back the glamour of a certain synth-pop against itself. The track includes what sounds a wonderfully absurd lyrical dig at John Foxx in the shape of ‘is it a new system of romance? What about the people that die?’.

From here on the record gets more haunting, much colder, more synthetic as the urban becomes metropolitan, everything gets slower, more measured, more serious, and a whole series of highlights begin to emerge. “Ice Cold Waves” is an evocative, intelligent weave of hushed voices, drum machines, freezing electronics and bursts of saxophones, “So Unreal” a metallic, heady spy-story, and the title-track “A Rose is a Rose” is a quiet, stark piece whose pulse will follow its listener around for days.

While much of the material here is effectively very classic, much of it is interestingly performed and recorded, with strange pauses and patterns, interesting layerings of instruments, unplaceable bangs and clangs. The tracks start like something you know and develop into rewarding, consuming little pieces. A Rose is a Rose ends up being quite a consuming record, testament to a rawness and opaqueness worth repeatedly returning to.