Listen to Jonah Sharp and Aybee collaborate on a live performance 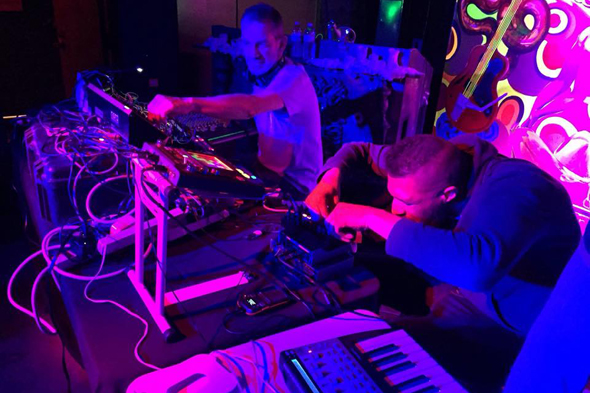 Check out what happened when the Bay Area techno veteran and the Deepblak main man wired up their machines.

Compared to the East side bastions of New York, Detroit and Chicago, the time-honoured legacy of West Coast American electronic music has been less globally revered over the years. Los Angeles certainly gets nods to the Brainfeeder posse, Gifted + Blessed and a host of other variations on the beat scene, but the Bay Area often gets overlooked. It’s certainly not the case that there has been a dearth of music from the area, but perhaps the operators aren’t getting the props they might otherwise deserve. A prime exponent of such a theory would be Jonah Sharp, who played a vital role in the development of ambient techno in the early ’90s through his work as Spacetime Continuum and Strange Attractor, not to mention being part of groups including the seminal Reagenz with Move D.

Aybee meanwhile has been doing some sterling work to right such injustices alongside his Deepblak brethren Afrikan Sciences and Damon Bell. He is the first to cite Sharp as an influential figure by stating “Jonah represents a Yoda of sorts to many of us from the San Francisco Bay Area that live this music.” The comment comes alongside a half hour recording of Sharp and Aybee performing live together at the Forward 2015 Festival, which took place in Washington D.C. back in May. Crediting Sharp with providing him with his first gig, Aybee is clearly enthused about the experience, which formed part of a rugged techno improvisation reportedly also featuring Brendon Moeller on the night in a fluid live / DJ hybrid performance. Check the audio below, and head to the SoundCloud page for a little more information.