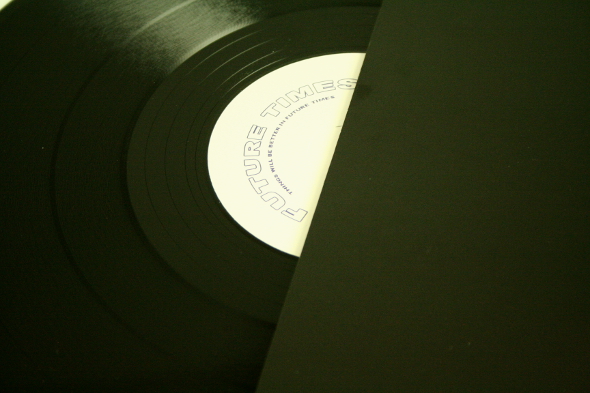 Future Times continues to be a label loaded with surprises, as the Washington DC label shapes out an identity that seems to be rooted in little more than outboard experimentation and unconventional grooves. There has always been a dance music thrust to at least some of the material on Andrew Field-Pickering and Mike Petillo’s esteemed imprint, but it’s rare that the music ever conforms to a DJ/crowd-focused functionality when it could be charging into more psychotropic lines of enquiry. Last year was their most active to date, thanks to choice offerings from Hashman Deejay, Jordan GCZ and Protect-U amongst others, and now they leap into 2015 with yet more intriguing and heartfelt electronic music.

Heart is indeed at the forefront of this debut release from Mosey, which totals three tracks that span no more than ten minutes in total as something of a kick back against the lengthy statements favoured by the live jam studio heads these days. “Tuff Times” is the sole long form track, and in fairness the title is nothing if not misleading as it’s really not that tough. Sure, there is a chunky kick thumping out in the lower register, but it’s no more than a placeholder for the synth work on top. By the time you reach the peak of the track there is a grand total of three percussion sounds at work, and it doesn’t feel like any more is needed. This is down to the real focus of the composition, which is the soul-stirring synth work. From the slightly mournful pad chords to the bittersweet lead line, this is a track that places all the emphasis on melody and does it with such simplicity that it would be hard for anyone to not feel a pang of emotion from the moment it starts. With a set of parts you could almost count on one hand, it’s a fine example of how much can be expressed with so little.

This stripped back but fulsome approach carries through to “TC Midi Labs”, even if the effect is very different indeed. The brief excursion feels like a studio experiment that struck gold and needed no arrangement distractions in order to be ready for the cut, as a cascading and rhythmically obtuse set of chimes ping out with a glossy, hi-res finish. It’s the kind of startling effect that comes on like a futuristic fairy tale, deliriously odd but equally pleasing to dive into. “Live A Little” by way of contrast comes bounding out of the gates with a brisk drum set before being softened by more of those blue-hued harmonies that clearly worm their way into much of the Mosey creative process. Once again starry-eyed wonderment is the order of the day, albeit strapped to a rock solid electro beat.

Even if the three tracks on Tuff Times are thoroughly separate in their execution, it’s the emotion that binds the record together as a whole. In many ways those style-defining melodies play out with a charming naivety, but Mosey has made a strong case for a few choice elements turning out a more meaningful and memorable listen than any number of high-concept studio tricks.