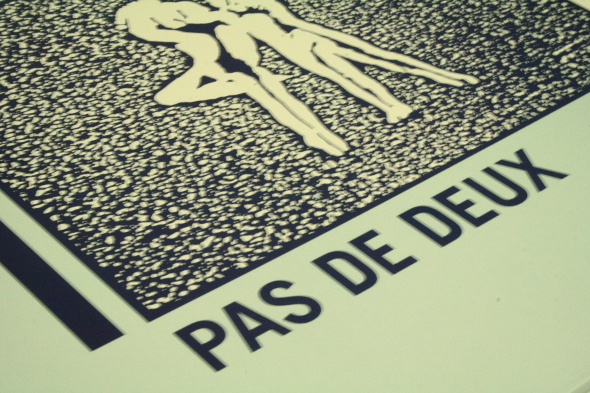 After various efforts dedicated to unearthing the weird and the wonderful of the Iberian decade of anxiety, Barcelona-based Domestica Records play a strange and quite seductive mirror game for their latest release. A reissue of a compilation made in Spain, grouping artists not from Spain, and throw it right back out to the world outside. A famous compilation, it has to be said, one that has been circulating undercover for the past thirty years surrounded by a cloud of angular, avant garde allure. 500 copies then, 500 copies now. Once more, with feeling. 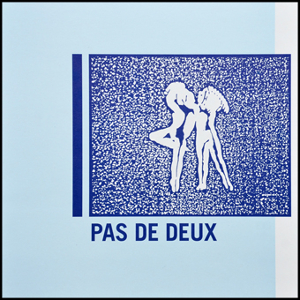 Pas De Deux is a product of Granada-based primitive techno pioneers Ani Zinc and Javier Marin, the powerhouse behind Diseño Corbusier and Neo Zelanda and also behind the extremely bright star of the Auxilio De Cientos label, which apart from releasing Zinc and Marin’s own work also served as a home for various other notable artists. We have them to thank for, say, first putting out Twilight Ritual’s Rituals or The Klinik’s Walking With Shadows. Alongside these many activities, Auxilio De Cientos worked on a number of aggregative and pretty damn visionary compilations between 1985 and 1986, all committedly international and gloriously off-kilter. There’s Femirama, a brilliant tribute to the minimal industrialist women of the era, there are the dual promised lands of Terra Incognita I & II, assembling the likes of Ptôse and Muslimgauze alongside lesser known but really quite radical formations, and then there’s this little gem here, Pas De Deux.

Probably the most curious of the bunch, the invitation for this one was open to couples, or duos, comprising of a man and a woman. The rest, as Domestica’s founder Jordi Serrano would have it, is aesthetics. All of these groups share a DIY set of methods which leak, sonically, into the music they make. The bones of these songs are obsessive loops and adventurous voices, asymmetrical rhythms, bangs, clangs, breaths in the night. I remember once reading on a blog a description of one of these compilations that went something like ‘abundant quality and sidereal orgasms’. It’s a very accurate illustration of what to expect on Pas De Deux.

Difference is key here. Differences between rhythms, timbres, and fascinations. Artists from across the pond take up half of Side A, with the chiming guitars and deadpan super-American spoken word of Algebra Suicide’s “Gist” and “Waiting for Delmore”, and the cheeky, squeaky swing of the Psyclones’ “The Drugstore” gracing the first 20-minutes or so with a kind of humour and airiness unusual in most European products of this sort. Still, the bookends sort of dominate – and dare I say unsurprisingly, given what they are. Bene Gesserit’s impossibly irregular rhythms and super-echoed, super-crazed vocal delivery on “You Can Dance if You Want”, which opens the record, loom over the rest of the first half. A tinny splice of a million neurotic conversations, an incredibly busy, messy track which nevertheless stays strangely affable, delicate. Part one closes on “Confucius” by Influenza Prods, Italian ‘home-wave’, as they used to call themselves. This is a beautiful, meditative piece; a stargazey fabric of silvery, almost childish synth sounds, woven across with filtered yells, distant sopranos and robotic chanting.

On the second part of the record things get more interesting from everyone, not only from the usual suspects. Side B opens on quite an astonishing track from proto-techno Swedes Enhänta Bödlar, who continuously pierce through a looped swoosh with repeated cuts of dialogue, the clang of what sounds like cutlery, and the odd haunting, and slightly orientalist melody soaking the background. Diseño Corbusier themselves contribute one of their most magnificent pieces, “Ritmo 21”, evoking a minimal, clean, steely landscape before the heavier, organic rustiness of the quasi-martial “On the Rate Line” by Lied And Die Freude.

Fittingly, Pas De Deux closes this show of dazzling experiments on a track from the tragically under-productive duo Cheiron, whose Lex Grauwen’s then went on to form cult melancholy act Tranquil Eyes. Their “Land After Life”, which later enjoyed subterranean flexipop fame, is bursts of white noise and squelchy pulses on a bed of multiple hammering drum machines, changing key at every round like some sort of devastating nursery rhyme, as José van Waveren slowly sings the world out of existence: ‘no skyscrapers / clouds burst open / no rain / no snow / no sunshine / no life / finally in heaven / finally no more world at all!’ And the kind of innocent joy with which she sings such a grave line really is a kind of manifesto for the kind of music this compilation so lovingly chronicles, for how it was made, for how it feels.

Pas De Deux is a really good photograph of a certain current of what I can only describe as soft industrial, apocalyptic at heart yet fuzzy, tender, elegant in manner. It’s sonically inspiring but also emotionally inspiring, somehow – and Domestica release it because Zinc and Marin’s work was inspiring to them. So, thats quite a lot of inspiration packed into this pas de deux, which proves that two’s definitely enough of a party.

A1. Bene Gesserit – You Can Dance It If You Want
A2. Algebra Suicide – Waiting For Delmore
A3. Psyclones – The Drugstore
A4. Deux Pingouins – Le Chien
A5. Viscera – Silent Friend
A6. Algebra Suicide – Gist
A7. Influenza Prods. – Confucius
B1. Enhänta Bödlar – Akaphi Ad Ultimatum
B2. Diseño Corbusier – Ritmo
B3. Lied And Die Freude – On The Rate Line
B4. Bene Gesserit – So Far From Asia
B5. Deux Pingouins – Le Plongeon
B6. Cheiron – Land After Life