Fockewulf 190 ‎– The First & Second Side Of The Mystic Synth 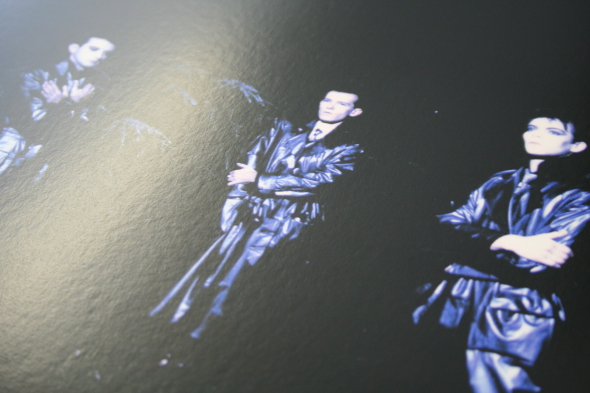 A step in the darkest heart of Italo disco. The persistent handsomeness of Fockewulf 190 gave us the gorgeous hits “Gitano” and “Body Heat”, but we have a plethora of other treasures to thank them for. The martial epic disco anthem “Eagles in the Night” released as a solo by Dario Dell’Aere, the hard-edged wave of Ice Eyes’ “No Sex” or, for the connoisseurs, the tropical melancholia of Frank Tavaglione’s “Tumidanda”. Recently the more private side of Fockewulf has emerged; versions of the glacial “We Are Colder” appeared on Spittle compilations, and a full reissue of remixes and demos was delivered by the band and Vinyl on Demand in 2011, under the name Microcosmos 82-86. And it is Vinyl on Demand which – as it so often does – now teaches us how little we knew of the group’s rather massive output, and sets the record straight through this release, out on its sublabel Pripuzzi. 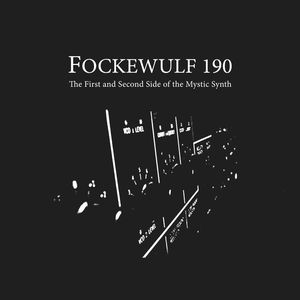 Turns out, the Dell’Aere / Life / Nonnis trio had their finger on the proverbial pulse. They had done a couple of things in the late 2000s (notably the tenebrous and obsessive “Oh Oh Oh” in 2009), they had been reworking their old forgotten demos, but they had also been writing an entire new album. This resurgence was sadly interrupted by Victor Life’s untimely death in early 2014, an event that hovers over this release, lending a slight taste of elegy. Isn’t it awful for someone who has chosen to call himself Life to die young?. With a large photograph of Victor Life printed in the gatefold sleeve, this release puts out not only the band Fockewulf 190 were, but also the band Fockewulf 190 would have been. The first LP contains the 2013 album The First and Second Side of the Mystic Synth, the second a 2013 re-edit of a 1986 demo entitled, again elegiacally, In the Rooms of Memory. The tensions between the two records dominate the listening experience; it’s really very fascinating to hear the hidden folds in the arc of Fockewulf’s chameleonic career.

In the case of the 2013 record, the clue is in the title: the synth really is mystic. While the echoes of past Italo headiness undoubtedly ring out in the background – as does the deep expertise of musicians who have been dealing with these sounds for over 30 years – the tone of The First and Second Side of the Mystic Synth is thoroughly transcendental, spiritualistic, and often orientalist, too. The strange and interesting thing here is how the band’s hard synthwave aesthetics incorporate such mystic suggestions; the record has a kind of roundness which manages to shortchange neither the warm nor the cold, neither the rigid nor the enigmatic. A cover of John Foxx’s “He’s a Liquid”, and a new version of Fockewulf’s freezing and glorious “We Are Colder” (still glorious despite a female vocal which doesn’t exacrtly burst with charisma) sit alongside tracks such as “Alcyon”, a mournful, masculine chant (Dell’Aere’s voice has a beautiful adult fragility to it now) and the tribal beat of “Orient Express”. The highlights are what we could describe as the most experimental tracks. The threatening, slow digital pulse of “Voices” and the soft piano of “Blue Rain”, which close Side A and B respectively, provide dense, intricate swansongs.

However it’s In the Rooms of Memory, newly re-edited from 1986, that supplies the magic here. The highly evocative and concentrated “The Midnight Sun” features slight, silvery paired down synths twinkling in the dark over sweeping whispered voices before opening onto the analogue sea of “The Breath of the Universe”, where Fockewulf move into quasi-esoteric territory. Then, the album just gets more and more beautiful. The angular and haunting metal beats of “Monodance” give way to a side B full of intense pleasures. “Aliens – Spoke To Russia Flight Controllers” is gorgeously glitchy, dark and paranoid, “In the Rooms of Memory” is essential Italian darkwave, and “In The Court of the Seven Sun”, cosmic yet medieval, is music for the next ice age.

The First and Second Side of the Mystic Synth is the desirous, generous, still fiercely passionate photograph of a group which seemed to be just discovering something new about itself, something profound, something strong. For those who have loved Fockewulf 190 and Italian synth more generally, it’ll be illuminating listening. The robotic psychedelia of tall dark strangers, a rare treasure and a real step in the dark – a velvety, blustery, scintillating kind of darkness.

A1. New World
A2. Walking Out
A3. Magic World
A4. Aleyon
A5. Voices
B1. Future in the Past
B2. We are Colder
B3. Over Again
B4. He’s a Liquid
B5. Orient Express
B6. Blue Rain
C1. The Midnight Sun
C2. The Breathe of the Universe
C3. Monodance
D1. Aliens – Spoke to Russia Flight Controllerz
D2. In the Rooms of Memory
D3. Infinity music
D4. In the Court of the Seven Sun