Batu next on Hotline Recordings 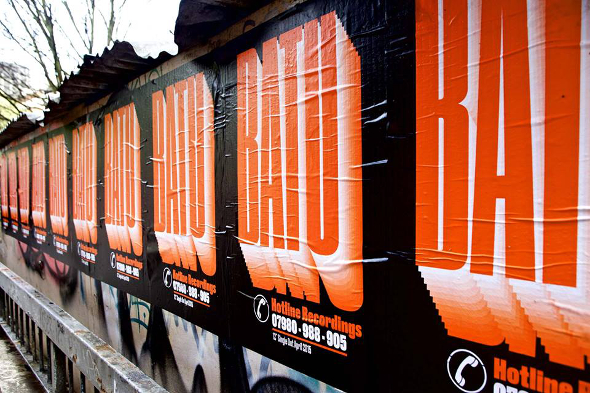 Two weapon grade cuts from the rising Bristol-based producer feature on the cultish label’s next release.

In amidst the regular influx of assorted promotional paraphenalia to arrive at the Juno Plus office in North London, last week saw a tube-shaped delivery bearing the hand-stamped Hotline Recordings logo. Held within was a poster detailing an incoming new release from local Bristol type strikingly similar to those emblazoned above – click here to view our editor modelling said poster. Apparently these orange posters have been filling up any available flat surfaces within the Stokes Croft area of Bristol these past few weeks. Full details of this seventh Hotline release have now been revealed by the good people at Tape Echo and it finds the label unleashing two Batu tracks that have until now remained in the hands of a trusted few.

One of countless releases delayed due to the annual Record Store Day releases, Numen/Cazz is now set to arrive on the shelves of independent record shops everywhere next week. Both tracks will be familiar to the more obsessive Mixesdb dwellers out there with “Numen” getting an airing on one of Tessela’s Radio One residencies last year as well as a Ben UFO Rinse session with Logos, whilst Batu included “Cazz” in his Rinse guest mix last October. Batu’s Hotline release comes in the aftermath of the producer setting up his own Timedance label which was inaugurated in fine style by the Cardinal/Domino Theory 12″ back in March. You can stream “Numen” in full below.

Hotline Recordings will release  Numen/Cazz by Batu on May 18.