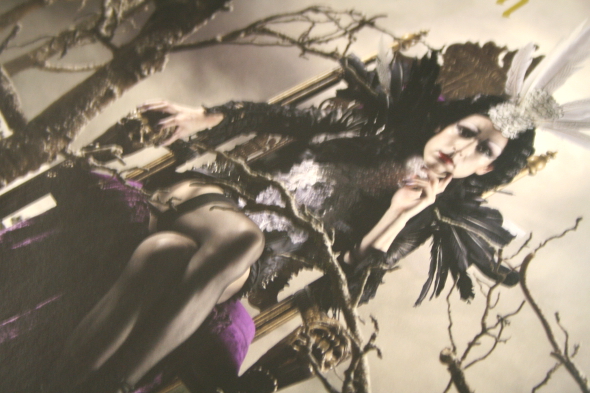 The many headed Tobias Bernstrup has been weaving his retro-futuristic electronica in with his queer-dystopian visual art and his glacial performances for almost two decades now. He made Images of Love, in which he plundered Righeira’s synth-line from “Vamos a La Playa”, when you still payed for Righeira LPs in lira and people laughed at you for buying them. His first LP had a cover in which Bernstrup looks like a Schlager singer in a piano-bar on the outskirts of Dortmund. It was strangely brilliant.

Then, Bernstrup grew. He made a string of infectious and uncompromising singles: Ventisette, Neon Love, Midnight Blue, 1984. The Italo baton picked up expertly and adoringly by this camp, tragic, smart Swede. His 2011 LP on Other Voices was well-written and atmospheric, intense. He did some sophisticated stuff with Martial Cantarel on Mannequin. He did some not so sophisticated stuff with Saralunden. He continued to surprise. What has emerged over the years in Bernstrup’s work is an artful balance which manages to keep him on the line between tacky and knowing, between kitsch and learned, between trashy and cultish. Here, it seems, that line splits into two.

Bernstrup’s Romanticism, released by that stylish bunch at Enfant Terrible, presents itself as a kind of opus maximus. On the cover, Bernstrup as Snow Queen sits on a throne staring darkly towards the listener, who has not two, but four sides of unashamed romanticism to go through. The record, for mysterious reasons, is pressed onto two 12”s. This is interesting, because in fact this album sounds like two records, not one. Romanticism has an inventive, smart, even elegant side, which tries out yet another route in Bernstrup’s protean career; it has another side which drowns Bernstrup’s knowingness and humour in a sea of uninventive beats, late ‘90s EBM chord progressions and other cheap tricks which elicit teenage feelings. Overall though, it’s tragic synth-pop. An album for dancing and, depending on how tasteful you’re feeling, it delivers that well.

“Moments Lost” – a fast, furious and decidedly romantic dance track – opens as a sort of manifesto of the icy pessimism that hangs over the record. Sometimes that pessimism is developed in interesting ways. “Until Tomorrow” has a delicate, intricate rhythmic pattern and an elegant, noirish character; “Hitman” bites into the EBM canon with a kind of brutality which suits Bernstrup well, and which provides a metallic, threatening edge to the more pensive material on the album. “Seek and Destroy” is also rather compelling and cinematic; a dystopian handsome piece with high-pitched frosty synth-lines and video-gamey beats. In “Lanterna Magica” Bernstrup returns to his more classic Italo formulations. It’s a kind of commercial beachy track which sees Bernstrup play the dishevelled metropolitan male in duet with one of those fresh female Italo voices, who bizarrely, between one tropical rhythm and another repeats the name of Giambattista Della Porta, an Italian scientist who developed a magic lantern in the 1600s.

“Moments Lost” also closes the album – in an epic Apoptygma Berzerk (!) remix which vocodes the hell out of it and adds in a samba cowbell (!?). Less inspired contributions include the ballad “Dorian Grey” and the facile “Happy Sad”, which is rather distressing goth Euro Disco. The strangest track is by far “Revolution”, which sees Bernstrup as LGBT activist riff on Sam Cooke’s “Don’t Know Much About History” to call for a revolution in the name of love – honourable cause, musically dubious consequences. It’s good Pride march material, but not much else.

Romanticism is an enigmatic record which opens up various paths for Bernstrup’s future and, as ever, keeps us on our toes. It’s possible that this turn may be the beginning of a new Bernstrup to come, that this intensity will find its sonic counterpart in a more personal language. In a sense, we need Tobias Bernstrup – we need him because he’s not afraid.

A1. Moments Lost
A2. Happy Sad
A3. Until Tomorrow
A4. Oceans
B1. Hitman
B2. Seek And Destroy
B3. Romanticism
B4. Dorian Gray
C1. Revolution
C2. Laterna Magica
D1. Moments Lost (Apoptygma Berzerk Remix)