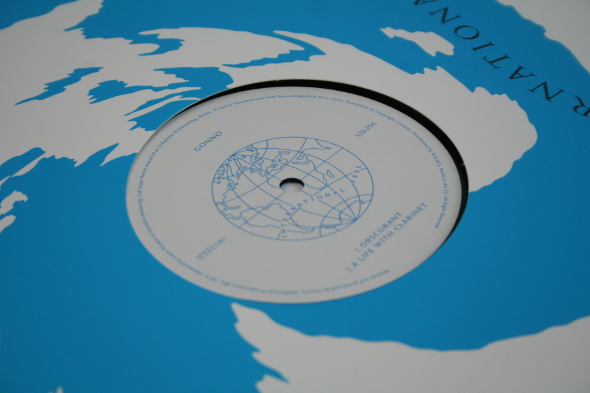 It’s been some four years since Gonno last appeared on International Feel, though the Japanese producer has hardly been idling. Following that EP – a typically enjoyable EP that touched on both melancholic, analogue-heavy acid house and drifting, guitar-laden ambience – he’s plied his wares on Niteless, Endless Flight, and most notably, Beats In Space. His 2013 The Noughties EP for Tim Sweeney’s label offered a neat summary of his career to date, layering rough, often melodious analogue synthesizer lines on top of raw deep house grooves, throbbing dub techno textures and sensual ambient chords. This return to International Feel features some of his regular tropes – analogue-sounding electronics, picturesque tunefulness and a fearless commitment to mood-enhancement through music – even if they are packaged in a far more glassy-eyed, Balearic way.

This is perhaps most apparent on “A Life With Clarinet”, which is so unashamedly positive that it’s likely to raise a smile from even the most miserable of listeners. It’s Balearic in the classic sense – breezy, colourful and mood enhancing, with bright-eyed, synthesizer melodies and darting, sun-kissed electronics catching the ear throughout. It takes a while for the beats to kick in, and when they do, the rhythms take a surprising shape; loose, snappy jazz breaks, of the kind that evoke memories of classic Japanese nu-jazz and rave-era Balearic house. Those with a passion for classic Detroit techno may also be reminded of Galaxy 2 Galaxy’s 1993 masterpiece “Journey of The Dragons”.

The same comparison can probably be made about “Obscurant”, the EP’s stunning title track. Based around the kind of cyclical, saucer-eyed synthesizer lines that would please both Tangerine Dream and Steve Reich, its’ hissing, rolling rhythms doff their cap to both contemporary new age deep house – Jack J, Cloudface, Beautiful Swimmers and the like – and the eyes-closed pulse of vintage techno. The track’s most attractive feature, though, is the way that it slowly builds in intensity, with additional waves of synthesizer and subtle percussion hits pushing listeners towards a heart-stopping, all-out ambient climax. Some may draw comparisons with Hashman Deejay’s brilliant “Samba”, or – even more potently – the often-overlooked 1990s work of fellow Japanese producer Mr YT (and, in particular, the Apollo-released Southern Paradise EP).

With such surging beauty throughout Gonno’s two original tracks, it’s perhaps fitting that Call Super takes a deeper, more languid approach on his remix of “Obscurant”. Built around a hypnotic but percussively versatile dub house rhythm, the Houndstooth producer makes great use of dreamy pads and, from the two-minute mark onwards, selected passages of Gonno’s mesmerizing synthesizer melodies. The combination is one that, once again, recalls classic, dub-soaked deep house from the early ‘90s, with a little bit of Pal Joey thrown in. Although less startling than Gonno’s original, it provides a fitting conclusion to an excellent EP.