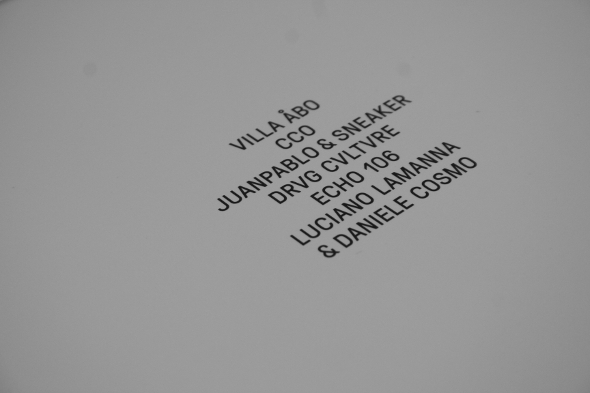 It’s rare for a label to be as open about their backwards gaze as Lux Rec, who define their focus “on elements from the early electronic scene, with the intent of redefining and shedding a new light on it.” When you look at the range of artists involved with the label, the declaration makes total sense. From Jared Wilson and R-A-G to Helena Hauff, all the artists releasing on Lux are bound by their use of archaic equipment to yield new routes through house, techno, electro and beyond. It’s not an easy job to find innovation within the limitations of hardware that has been used constantly for more than thirty years, yet these are all artists that manage to sound original every time, and it’s a credit to Lux Rec that they recognise such talent and can curate their releases so consistently.

Five years on from the very first Lux 12”, it’s high time that a compilation was released to sum up what the label is all about, and it strikes a balance between label regulars and new signings. CCO and Echo 106 are old hands, and their offerings between them shape out the diversity that Lux has built itself on. CCO’s “Pale Distant Lights” comes on like something of a defining track for the compilation given its title, and there’s certainly plenty of evocation to be derived from the billowing pads and tones. The mist that hangs over the track comes from a dubby mentality without any standard dub tropes, while the acid line and 80s keyboard stabs peal through the fog in a startlingly accurate depiction of the titular illuminations. Echo 106 meanwhile takes a more savage approach that harks back to primal acid machinations, even as ever more extravagant synth lines come spinning in to mingle with the fast-throbbing 303.

In terms of new appearances, Jan Svensson from Swedish techno troubadours Frak makes a solo outing in his Villa Abo guise, and turns out a typically wayfaring techno excursion that slides the groove around in subtle but beguiling configurations. Drvg Cvltvre does a grand job of wringing out some goth-tinged dirt in keeping with his distinctive distorted style, laying down heavy synth lines that revel in their own broodiness. One of the stand-out turns on the release comes from Luciano Lamanna and Lux Rec co-founder Daniele Cosmo, who between them whip up a wonderfully bloated and extravagant celebration of gutter-wave sludge techno. If that sounds like a preposterous definition of the track just give it a listen, for there really is something slovenly and depraved about the low end pulsing of “The Darkest Hour”, and yet through this grimy stew comes a heartfelt synth refrain to shame all the wayward drum sounds with its elegance. It’s a sound in the minority though, and the unruly beat wins the day in the end, but not at the expense of the soul.

That track closes the compilation, and it makes for a neat summation of what Lux Rec stands for. In the ‘80s and ‘90s there was less use of distortion as an aesthetic benefit in electronic music production, and rather producers were striving to get the best sound they possibly could from their rudimentary set ups (maybe bar the more punk-derived fringes of industrial et al). Now such sonic perfection feels too easily attainable, the mentality of outfits such as Lux and its respective artists is to fully embrace the well-defined limitations of any given equipment and see how much further they can be pushed into new and unusual places. Judging by the quality on The Dying Lights, there is still an abundance of excitement to be found in these places, giving credence to the art of old methods as much as sonic and technological innovation.