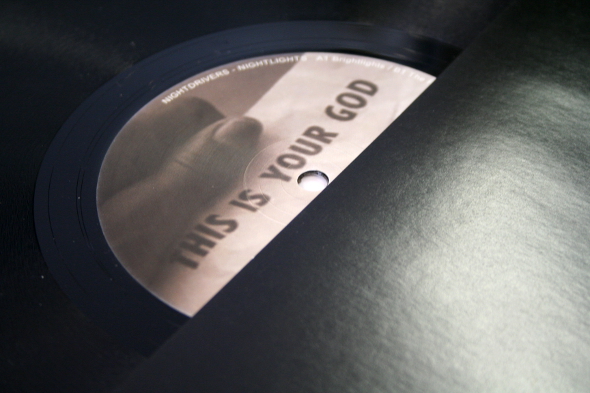 With their fingers in a multitude of different pies, the Nightdrivers pairing of Rufus and Mass_Prod return to their self-titled imprint to fire up another round of insistent, floor-focused wares that further shape out the image of urban, nocturnal dance music that sits in a cinematic time-slip somewhere between classic and contemporary. From the name to the imagery on the sleeves, there is a feeling that a concept lingers behind Nightdrivers, guiding their hands when they take to the studio and radiating out of the finished product. Previous releases on Bosconi and Claap may have hinted towards this, but previous self-released 12” Nightvisions and this new trio of tracks seem even more tailored to the situation. 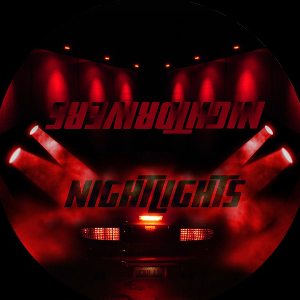 “Brightlights” is quite a marvel to behold, making for one of those repetitive, DJ friendly jams that still has the power to turn heads wherever it’s played. At eight minutes plus, it’s a lengthy ride but one that doesn’t stray from a very clearly defined path shaped out by a body-beautiful beat. The crafty rhythm section snaps and whips in all the right places, but in its classic tech-house structure it wouldn’t alone make for a noteworthy release as much as a well-executed one.

Instead it’s the power of the pealing bell chimes that makes people pay attention, sticking out in the context of the low down interlocking groove of the rest of the track. By way of its distinctive, organic quality, the bell in turn validates its counterparts and makes that seemingly endless groove feel utterly addictive, and when a simple repeated phrase can do that to a track, a perfect dancefloor weapon is born. There are of course other elements at play here, and in the later stages of the track you can hear whispers of Rufus and Mass_Prod’s membership in far-out noise outfit Tru West rising and falling in the background, but this is all about upfront club tackle delivered with just the right kind of finish.

Some of the looped up elements from “Brightlights” find themselves reappropriated for the B2 cut “Funky Lights”, which gets into a more tightly wound tech-funk situation with no less focus on dancefloor functionality. Here it feels as though a touch more movement occurs between key elements in the mix, but without a hook as powerful as the bells it shifts closer to the realm of a straight-up DJ tool.

By way of contrast “The Pimp” lightens the mood with a more colourful mixture of sounds, using smooth chord chops and displaced vocal licks to create a more musical feel compared to the other two tracks. The elements feed into the mix slow and steady and build towards a particularly heated stew, moving carefully with each stage of progression rather than engineering dramatic rises and falls. Perhaps those edges are smoothed out by plentiful use of delay, perhaps the constant warmth emanated by the keys gels everything together, but either way “The Pimp” goes down very easily indeed.

While they may indulge in their most challenging ideas via other projects, it’s clear that Nightdrivers provides a platform for Rufus and Mass_Prod to serve up their vision of warts-and-all party music. Marrying a touch of sleaze with muscular functionality, a little sophistication and a little mad-eyed magic, a very potent blend is birthed that may not break down any barriers but does what it is meant to perfectly.