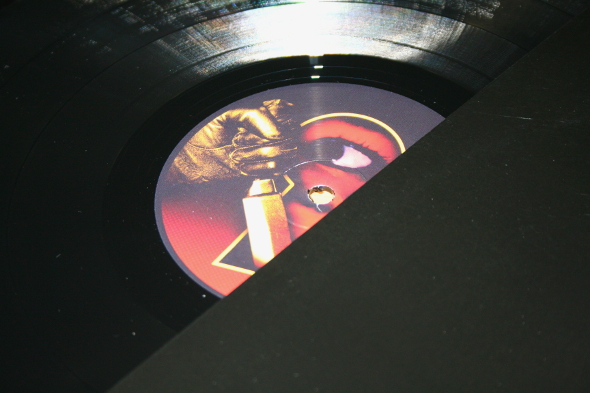 There are a few reasons why Giallo Disco stands above most of its peers. Apart from the music, every release feels like an event. From Eric Lee’s ornate, movie poster-style artwork, to the great back story that Giallo write and the efforts that the label’s owners go to track down artists and make their projects become a reality, there is a yawning chasm between the average disco/techno/house label and this sprawling, unpredictable experiment. The latest chapter in the Giallo Disco story is DKMD, a collaboration between veteran producer David Kristian, who has worked in a variety of musical fields and has released on Crème Organization, and poet Marie Davidson.

This being Giallo Disco, don’t expect a series of faceless club tracks; the title track kick starts the release, with the ringing of a  church bell, doomy sounding synths and a pulsing groove while Davidson shrieks like a satin-clad maiden who is about to be carried off to the sacrificial altar. It makes for an irresistibly over the top piece of disco noir. “I’m Watching You” is more restrained and features an indistinct, albeit slightly creepy vocal intoning the track’s title over a playful electronic groove and spacey, melodic whooshes. It’s reminiscent of Bangkok Impact at his trippiest.

“Mirrorball Massacre” is a different matter entirely. Again, it sees Davidson take centre stage; framed against the backdrop of soft back beats and cinematic melodies, her vocals are breathy and sensuous as she plays the role of a besotted, slightly obsessive lover observing her other half. As the track comes to an end, an added layer of Heathcliff-style Gothic obsession is added with a more distinct voice pleading ‘don’t kill me darling’ amid raven caws. On the flip, the label owners are tasked with remixing the project.

Antoni Maiovvi’s Hello NSA Mix of “I’m Watching You” is more clubby with an EBM bass and a catchy pop synth that has echoes of Depeche Mode. Instead of Dave Gahan’s nasal tones, the listener is treated to Davidson’s angelic voice, this time la-la-la-hing her way over the arrangement. Meanwhile, fresh from the release of his Black September album, Vercetti Technicolor, shoehorns Davidson’s OCD monologue into a pulsing disco groove and lends it a sense of innocence thanks to the use of sublime electronic melodies. It brings an end the latest irresistibly ghoulish chapter in the Giallo saga.