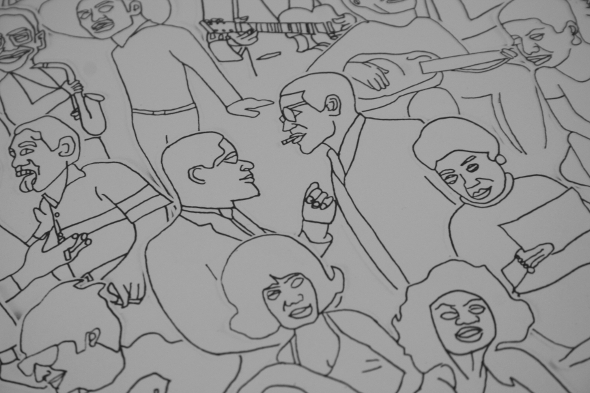 Romare’s debut LP is a reminder that sampling is an art, not a privilege. It’s also a statement that dance music doesn’t have to be soulless, offering up something that feels far more believable than the glossy, impersonal production that’s come to signify so many contemporary club tracks. Projections may borrow from the voices of others, but tracks aren’t just treated as an opportunity to shoehorn samples in; instead they’ve been put together as complex, musical palimpsests.

It’s an approach Archie Fairhurst has fairly owned since he first surfaced as Romare with Meditations on Afrocentrism for the Black Acre label back in 2012, but Projections feels like a warmer, more all-encompassing experience. His new label, Ninja Tune, explain that Fairhurst has studied African American culture, and it’s clear that full respect has been paid to the sources. Vocals are allowed to shine through, surrounded by the often-fragile structures created to support them.

There are endearingly human moments, when the crackle of a record or the break in a singer’s voice is brought to the surface. The album also has a pleasingly off-kilter rhythm, with club-friendly tracks dispersed amongst songs that feel more soulful, and meditative. “Motherless Child”, which apparently samples an American spiritual, has an old-timey mournful vocal refrain that hits you straight in the heart.

Although the press release pitches the LP as a ‘great dance music’ album, Projections is the kind of music that would make as much sense in a quiet room as it would in a club, perhaps even more so. In fact, as a whole, the LP is so complex and multi-layered that each new listen entices new parts of the puzzle to the surface. In a time when cultural appropriation is rampant, it’s a notable achievement for an artist to offer such uncompromising respect to their sources, creating anew without destroying its point of origin.