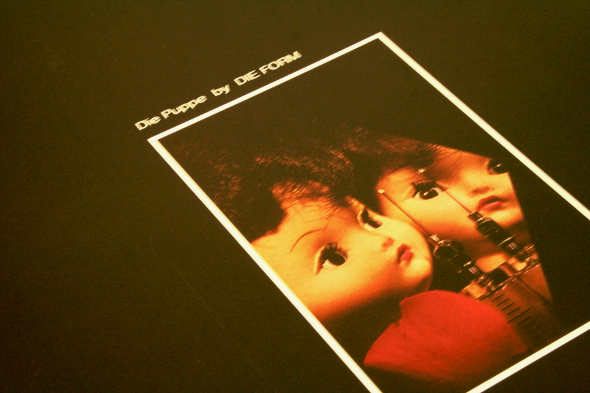 Dark Entries describes this reissue of Die Form’s 1982 LP as “unable to fit into any genre,” and believe Die Puppe to be “in a class of music all of its own,”. For once, that statement is 100 per cent true – true of Die Form but especially true of this album. I remember a feeling of pride when picking an ‘elegant’ digipak reissue around the turn of the century when returning home on a Saturday night eager to listen to it. High on the project’s mid-’90s productions, “L’Ame Éléctrique” and “Suspiria de Profundis”, I expected to find in this first album proper from Die Fom the seed of what haunted me in their later work: this filigree of fuzzy electronics and a distorted operatic female voice. This wasn’t quite the discovery I hoped for, so I moved on, back to their earlier material, and Die Puppe currently rests on the bookshelf of my parents house. From it, I think I wanted something I already knew, and Die Puppe can’t offer that: you don’t get to decide what you want from Die Puppe, it’s Die Puppe that sets the rules. 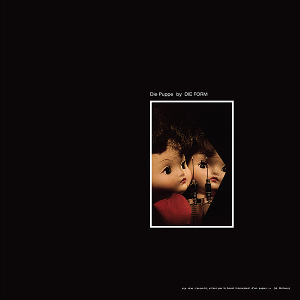 Philippe Fichot – who now, together with partner in crime Eliane P. (who joined him in 1986), has over 40 albums to his name, not to mention books, videos, photography, performances – was a young solitary genius in the gothic one-horse town of Bourg-en-Bresse when he self-released this masterpiece on his own label Bain Total in 1982. Having already put out a number of cassettes, while being completely in charge of his visual identity, Fichot was very clear on what his aesthetics were even if there wasn’t a correlating pigeon-hole the world could contain them. The notion of his music as ‘festish electronic’ or ‘festish EBM’ is odd, really, to speak about when it is actually delicate and sophisticated. Sex and music are impossible to separate in Die Form’s production, but both have to, in a sense, be redefined to understand what sex and music are for Fichot.

In Die Puppe that relationship is already quite clear, and flattened, in a sense – sex and music are the same thing, but in a totally inorganic, clinical, yet hardcore way. I remember a twinge of embarrassment from my first adolescent listens to early Die Form; not at the content, but at the delivery of it and how alien it was. This is perhaps the most delicious aspect of what Dark Entries have beautifully redelivered. This is an album which subjugates the listener to its language. The only way to remain indifferent is to turn it off. Don’t repeat my mistake.

The album opens on one of its strangest pieces, “Automatic Death”, a sort of quasi-rapped pop song about its title, and life, love and accidents which is supported solely by the sweeps and beats of a drum machine, and as such, is almost without melody. Fichot’s voice, however, behaves as if it were a melody, talking over sounds as if they were a tropical pop song. A similar trick occurs later in “Love with Animal”, where a complex drum pattern and Fichot’s relatively innocent voice proceed with in a fun-loving playground tone before breaking out into high-pitched squeals.

The electronics move from sharp and delicate to watery; everything is immaculately clean. “Invalid”, “Lectura” and “Night Over My Life” sees Fichot move expertly in and out of registers; from slow rumblings of bass inside deep, buzzing sonic landscapes punctuated by beats from underwater, to fast moving, razor-sharp clusters of hammering rhythms. Fichot never reveals the order or structure of what you’re hearing, but feeds you surprises all of the time, be they redefinitions, changes in colours, exposure or contrast – much like his photography.

Fichot’s hardware arsenal (Roland MC4 Micro-Composer, TR-808 Rhythm Composer, ARP 2600, Kawai 60F, Revox B77 to name a few) is never used how you expect. It’s smooth, rough, spiky and velvety all in the space of a few minutes. A new sonic dimension emerges in spurts across these textures, broken rhythms and ever-mutating tones, and you’re left questioning if and when you’re being made fun of. It’s never clear how conscious or fictitious things are because the language used on the album is always so personal. Moments of clearly constructed atmospheres – the slightly Middle Age-vibe, squarer order of “Prefazione di Pompei” or the confessional drama of “Darkness” – put you in the driver’s seat for only a moment.

The greatest gifts here are the (many) instrumentals, which from around the record like popping clusters of air. Strangely, these instrumentals are where things become more concentrated, and it’s more about the development of one idea and less the epic, distorted assemblage of many. “Eastern Ghost” and “After the Crime” have filmic cores which allow for moments of frozen reflection. The perfect diptych of “Re-Search” and “In a Tea Room” masterfully conclude the album on a tone of almost calm, supplying the opening credits for another film or a soundscape we would never imagine finding ourselves. For the finale, Fichot returns to the patterns of “Automatic Death”, but everything becomes slower, rarefied, and perfectly geometric.

Die Form’s Die Puppe is refreshingly outside of genre, and anyone interested in taking an unsettled walk down one of the less frequented alleyways of electronic music should take a fluorescent pleasure from it. It’s like a diamond, only from another planet.