A third dynamic 12″ from Tessela will land on the iconic techno label in March.

January is one of the quieter months for the Juno Plus editorial so when news filtered through rising techno producer Tessela had teamed up with Shangaan Electro figurehead Nozinja for a two track collaboration on Bleep, our office hysteria of tapping keyboards and frenetic email exchanges was quickly restored. News now surfaces Ed Russell will commit a third 12″ to R&S which further strengthens his relationship with the renowned label following the popular Nancy’s Pantry and Rough 2. This latest edition seemingly keeps Tessela on track to release through R&S once a year with the impending three-track Bottom Out said to be a product of a “frenetic session” following a birthday DJ set played by Ben UFO at London night club fabric.

Unlike previous Tessela records on R&S, this Bottom Out 12″ comes fitted with a remix which sees Kowton deliver an ‘OTT’ version of the far-flung and rave-inducing title-track, while the B2, “Total Music” is an abstract piece of rhythmically beatless techno. It sees Kowton repaying remix favours after Tessela reworked Pev & Kowton “Aztec Chant” last year from the Livity Sound back catalogue, while also providing Tessela with his first transmission of 2015. And if the reactions of the Juno Plus office are anything to go buy this could well be one of the year’s biggest singles.

R&S will release Bottom Out by Tessela on March 23. 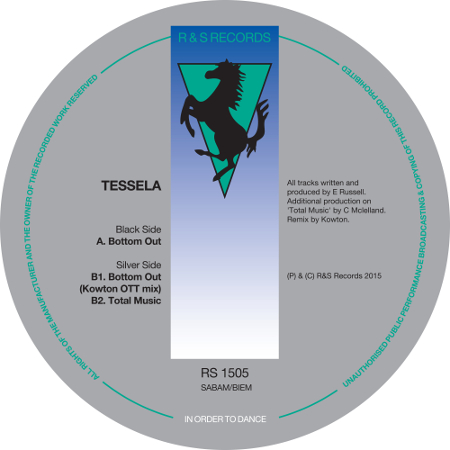