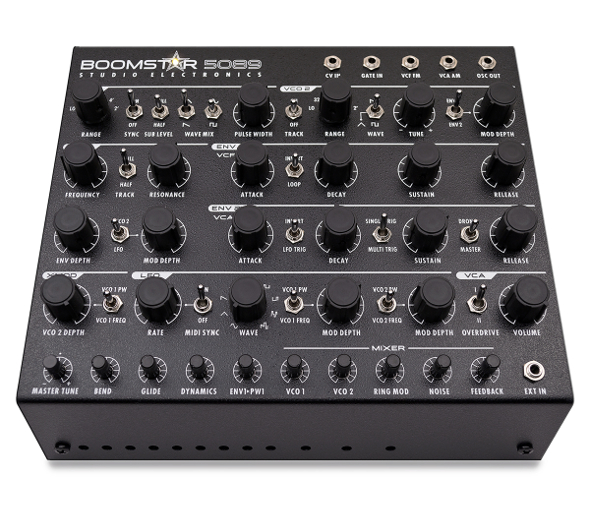 Rob Lee noodles with all five Boomstar Analogue Synthesizers for a closer look into the nuance of Studio Electronics’s latest product.

Studio Electronics point the way to a bright future in analogue music making with a new series of mono synths that have their roots firmly planted in the past. The family business was created during a time when analogue synths were being replaced by cheaper, digital products and it’s nice to know they’ve come out the other side with their analogue model still firmly intact during this digital age, and furthermore, delivered a new line of product for us to get our hands on.

Their new Boomstar range presents us with a family of five monophonic synthesizers that share the one common voice that’s characterised by five different, classic filters. It’s always been the filter that has shaped the character of classic analogue synths, such as the smooth singing quality of the Moog model D, the flexibility of the ARP2600, or the screech and snap of the Roland TB303. This fact isn’t lost on the tech-creatives at Studio Electronics who have come up with five mono synths that, apart from this single component, are identical.

First up is the SE80 that features the slow curve of a Yamaha CS80 low pass filter and it’s the SE80 model that also includes a high pass filter with frequency and resonance control. Next is the 5089 model that features a low pass ladder filter that imitates that found on a classic old Moog synth. The 4075 model delivers ARP 2600 like pliability whilst the SEM serves up a meaty and dependable Oberheim SEM-type filter inclusive of an additional band pass filter for added control. If you’re after that old school acid house sound then the 3003 model gives you an edgy Roland TB303 tone that really snarls once you pull up the resonance. All of this is served in a heavy-duty steel chassis with an easy access sloping faceplate fit for a desktop.

There’s been talk of a 700 model based on a Minikorg 700 being added to the range, said to feature both low and high pass filters, although it’s yet to land. If there was an element missing from the current crop of Studio Electronics Boomstars it’s a Korg-styled filter that has a sharpness to suit percussive sounds and a depth that is good for creamy bass patches. 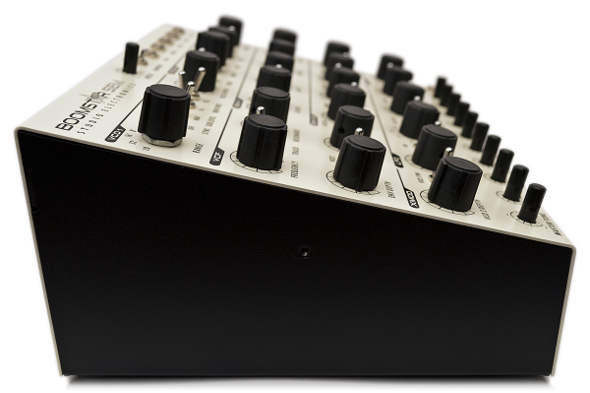 To look at, the five current models are almost identical, discounting colour scheme, texture and added filter controls of the SE80 and SEM. All five synths share the same basic voice design in the form of two proper old school VCOs, as opposed to the more modern and more stable DCO’s. The first VCO includes a switchable sub that allows you to mix in an additional tone an octave below VCO one. VCO one also includes mixable triangle, saw, sine and square waves with pulse width modulation. All have two ADSR envelopes, LFO, classic feedback (that was a popular feature of the old Model D Moog that added extra grunge to the overall sound), white noise, overdrive, glide and ring modulation with hardly a digital control on board.

Without extensive digital integration there is no way of actually saving patches for recall later, which forces you, the artist, to create patches from scratch every time you turn the machine on. So using one of these synths does require some experience with subtractive synthesis which facilitates the shaping of the sound by filtering out frequencies; hence the emphasis of a filters importance. After a few hours of tweaking and fiddling, however, you’ll most likely, through trial and error, be able tease out the sounds you want.

On the back of each unit you can find MIDI In/Out ports, a single quarter inch audio output and a professional three-pin C13 lead; the same type you’d use to plug in your kettle. On the rear you’ll find a MIDI learn button that allows the Boomstars to communicate with other outboard gear like keyboards, sequencers and of course, your DAW. There is also an overflow button that allows you to chain multiple Boomstars together and achieve a limited amount of polyphony, and in addition to MIDI, there’s also a modest amount of CV connectivity, allowing you to include the Boomstar synths in a set up with any other analogue equipment you might already own. 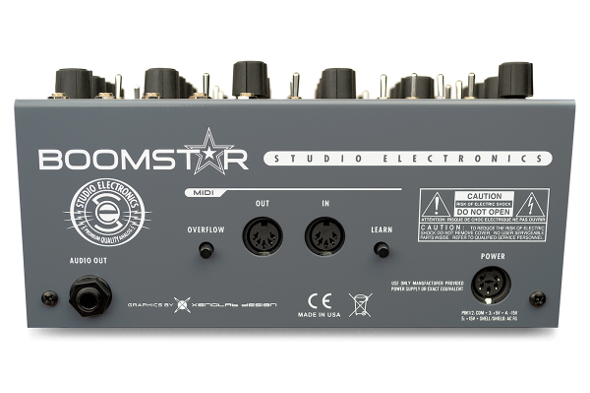 One of these units will set you back around £750, and there are endless amounts of synths out there nearly half that price, however, the quality construction, high end large knobs and switches of the Boomstars are a cut above. Despite this, some of the smaller knobs are quite reminiscent to the type found on much cheaper synths such as the Korg Volca range and to some extent it feels a little disappointing to have an expensive synth fitted with controls that might be found on something lower-grade.

There’s something about the overall quality of the Boomstars however that suggest attention to detail has been lovingly poured into them. The 3003 model’s filter slightly falls as you raise the resonance, while the SE80 model allows you to really explore some wondrous harmonics through its high pass. The SEM model gives you plenty of muscle for monstrous bass sounds and the 5089 gives you that familiar singing quality when you dial in resonance.

Each Boomstar is capable of creating patches for deep house, acid techno to droning walls of noise, and they’re very powerful machines, so in the end it’s not a question of which one to get, but a question of how soon can I get any of them.