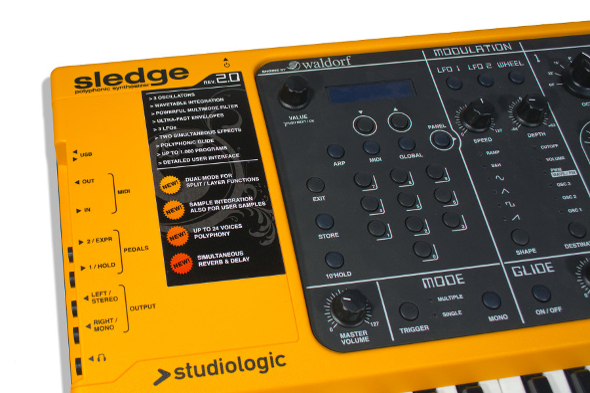 The keyboard makers and synth specialists have joined forces for an upgrade to the Sledge series.

As Rob Lee explained in his 2012 review of the first Sledge synthesiser, “Waldorf were approached by the Italian keyboard makers, Studiologic, who wanted to develop a way of controlling virtual analogue technology in a classic tactile housing.” News has now surfaced both companies have continued their collaboration to deliver an updated version, Sledge 2.0, that’s again topped in striking Lamborghini yellow. The revised construction of the 61-key, polyphonic synth is said to offer more in “pure synthesis”, with its three oscillators (per voice) offering sawtooth, square, triangle, sine and pulse (with pulse width modulation) waveform shapes – with frequency modulation available to sine and triangle waves – a noise generator capable of white and pink noise, and two LFO banks.

New aspects include Dual Mode, a feature allowing two sounds to be played at once in the single note, with the maximum number of notes the synth can be play simultaneously expanding to 24, which allows users “to get a better real time control over the new sound possibilities obtainable from synthesis and sampling together.” The Sledge 2.0 comes with its own USB-driven sample software, Spectre, that allows users to upload their own samples into the machine which can be further sculpted by the on board parameters and saved as a preset.

A new reverb and delay function allows those effects to be mixed together at the same time and a Global function means Pitch and Hold parameters independently control lower and upper sounds in Dual Mode. For more information and demo sounds of the Sledge 2.0 visit the Studiologic website.

Studiologic and Waldorf’s Sledge 2.0 is available now for a recommended retail price of $999.95.