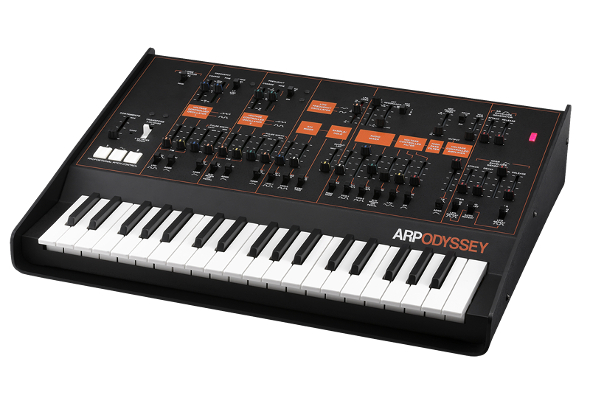 The new version of the classic synthesizer features a faithful recreation of the original circuitry, with a slightly reduced form.

News that Japanese manufacturer Korg would be making a recreation of defunct US company ARP’s legendary Odyssey synthesizer first emerged last February. Originally released in 1972, the Odyssey was an analogue duophonic (meaning it could play two notes at the same time) synth used by artists like Tangerine Dream and Juan Atkins, and news of the revamped Odyssey followed a successful reboot of Korg’s MS-20 synthesizer – though full details of what form the new ARP Odyssey would take have been almost a year in coming.

Yesterday Korg officially unveiled the new instrument at the NAMM show in California, via a live stream on YouTube that can be rewatched here. Like Korg’s new version of the MS-20, the new ARP Odyssey takes a slightly reduced form, coming in at 86 per cent of its original size. This means a slight compromise in the form of a “slim keyboard”, but Korg promises that the new model is made with a faithful reproduction of the original circuitry.Original ARP Instruments co-founder David Friend provided advisory assistance on the new model, which also features modern updates like USB and MIDI connections.

In keeping with the original’s portability, the unit comes with its own dedicated semi-hard case and even patch cables. The primary version of the ARP Odyssey features a black and orange colour scheme, but for fans of the iconic originals, Korg will also be manufacturing limited edition versions based on the original Odyssey’s black and white panel colour schemes. There’s no firm details on release date or price yet, but more details can be found at Korg’s Odyssey mini-site, and you can watch a short demo video below.