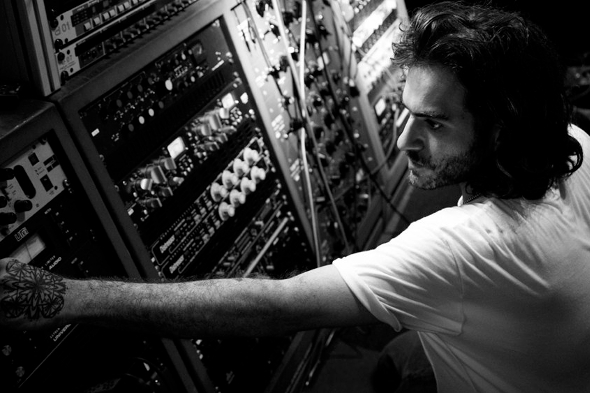 Oliver Hafenbauer’s label looks to Berlin again with Dekalog, a record from the Lack Rec affiliate.

First emerging in the autumn of 2013, the Die Orakel label has seemingly offered Robert Johnson’s musical director Hafenbauer an outlet to indulge his more esoteric musical urges, resulting in some fine 12″s. Whilst the first two Die Orakel transmissions came from relatively known figures in Christian ‘TCB’ Beißwenger and Giegling affiliate Edward, the label’s third release was a glorious plunge into the unknown from the unheralded Berlin production unit Jaures. It seems from that zig the label will zag back towards a (slightly) more familiar name whilst remaining in Europe’s favourite techno destination, with a Die Orakel debut for Pablo Mateo (pictured above noodling with gear).

The LACKREC co-founder’s upcoming three track Dekalog 12″ is due in early March, and the below previews suggest it retains the label’s indecisive links with both straight up forms of techno and more experimental sonics. The effervescent “Final Cut” is a perfect example of the former whilst Mix Mup-esque B-side “Xyzzl” explores the latter across it’s full 11-minute duration.