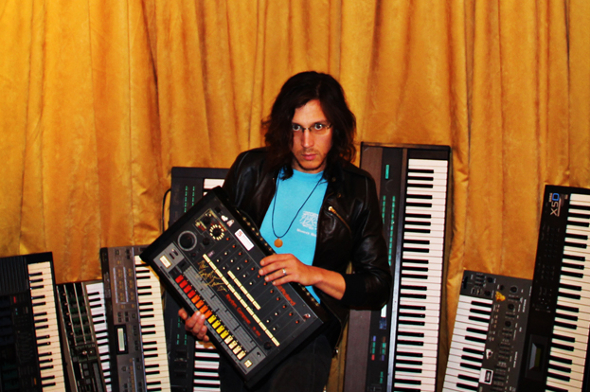 Crème Organization welcomes back Legowelt with a four-track dance EP due next month.

DJ TLR’s Crème Organization celebrates 15 years of music in 2015 and the first record to leave its ranks will be a new Legowelt EP entitled Vaporware Tracks Vol.1. As Legowelt, Wolfers’s prolific run of releases in recent times slowed last year with the Crystal Cult 2080 album for Crème complemented by just the two 12″s for Riverette and PPU. Wolfers did keep busy in this time, with his own e-zine Shadow Wolf, an online TV show with Willie Burns called Relics Of The Past, and most recently a free digital album of “professional ambient” music.

No stranger to the proliferation of Legowelt’s music however, a typically amusing Crème press release for this new 12″ writes, “so what would the week be without one or two new Legowelt releases eh?” Adding, “But before you start your usual consumerist whining, consider this: this here selection was made by a team of experts after truly careful consideration and sonically enhanced with a plethora of experimental prototypes. It was chosen for its coherence, depth, otherwordly qualities and general PIZZAZZ.”

Available to preview below, all four productions are murky albeit colourful dancefloor productions with cosmic and amusing titles abound like “Satierian Moon Breeze” and “Norwegian Crack Dealer”. The latter in particular sounding like a new age riff on Daft Punk’s “High Fidelity”.

A1. Norwegian Crack Dealer
A2. Southwest British Airways
B1. Satierian Moon Breeze
B2. The Sea Is So Silent